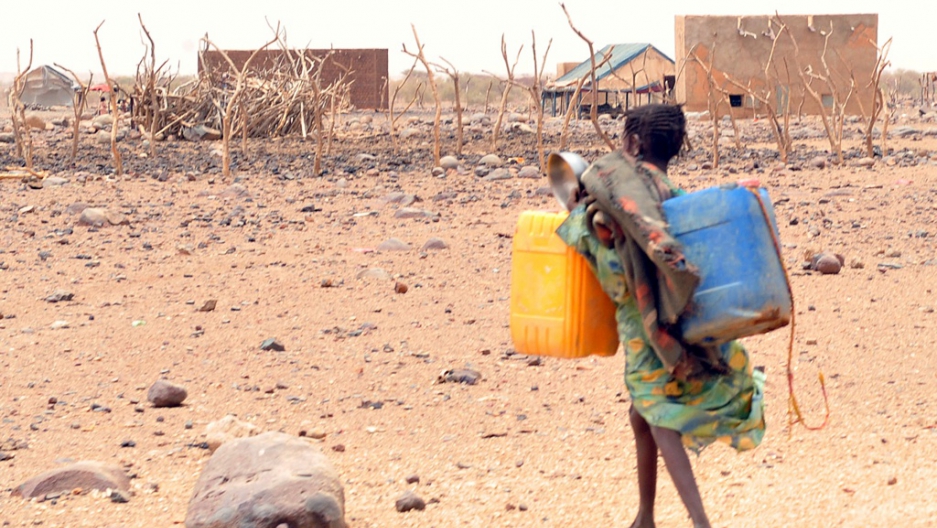 A girl carries cans to fill with water in southeastern Mauritania, on May 4, 2012. The food crisis across West Africa's Sahel region puts millions at risk of hunger, according to the UN.
Credit: Abdelhak Senna
Share

MARADI, Niger — Last year, a massive earthquake and tsunami hit northeastern Japan and left 18,914 people dead or missing. The damage was swift and created a nuclear disaster. People around the world were stunned and deeply concerned. Many quickly mobilized to help.

I was among those who went to Japan to support the recovery work. I saw firsthand how rehabilitation becomes more effective when the world pays attention. In March, a full year after the disaster, international media continued to focus on the story, reporting extensively on how the Japanese are coping.

Global interest and support were similarly strong following other recent catastrophes, including the 2004 Indian Ocean tsunami and the 2010 Haiti earthquake.
In contrast, the current large-scale food crisis in the Sahel region of West Africa hasn’t caught the world’s attention, perhaps because it’s happening slowly. More than 15 million people are already affected, but there has been little notice. In a severe food shortage, victims perish one by one, rather than in the thousands dramatically swept away by a powerful wave.

Earthquakes, tsunamis and floods get our interest and support in a heartbeat because their effects are instantly visible. Slow-moving disasters, though just as deadly, are typically ignored.

In a food disaster, we seem to need stereotyped images of starving children and ox carcasses lying on cracked dry land. International media arrive at the villages expecting to see stick figures. These images are just old clichés generally associated with the terminal phase of a food crisis, when it’s too late to act. They have nothing to do with what people in the Sahel are experiencing now.

The Sahel stretches across Africa from the Atlantic Ocean to the Red Sea, territory that includes the country of Niger. On a recent visit, United Nations humanitarian officials warned that the West African country is facing a "deepening humanitarian crisis," owing to the impact of a quick succession of droughts, abnormally high food prices and the failure of crops.

At this moment, we should be paying closer attention to these signs of an impending emergency. Observing the ways people in the rural areas are bracing for months of little or no food is much more telling but is a story not likely to make the evening news.

Slowly, families are running out of options. First, they cut back number of meals and shrink the portions. Then, they try selling some of their cattle and their few belongings to buy more food. Others are doing the same thing and the glut of cattle on the market has driven down prices. Families often send a son or daughter to work in the capital or abroad, but this year there are few jobs available. Many migrant workers were driven home early by the conflicts in Ivory Coast, Libya and Nigeria. What is left for them to do?

In a study conducted in two regions of Niger, both agricultural and pastoral communities told us that this year is the worst of the last three and that they have activated their drill of desperate measures much earlier than usual. Many already know that their food stocks and resources won’t last until the next harvest, around October. In other neighboring countries, the situation is very similar.

Tchima is a 40-year-old widow I met in Maradi, Niger. She has no income and survives by begging. She still had debts she acquired during the last food crisis in 2010. She has faced painful decisions, such as choosing between buying food or her children’s education. A food crisis is about much more than just food; the hunger trap limits people’s choices and their ability to carry on with their lives.

Not only do we need relief to save those most at risk, like Tchima, but also long-term solutions to help vulnerable people in the Sahel to break out of the vicious circle of poverty. Unfortunately, aid agencies like CARE lack the means to expand their response.

We have recent examples of the harmful consequences of inaction. The crisis that unfolded following the drought in the Horn of Africa last year was predicted, but media, donors, and humanitarian agencies took too long to react.

I call this “humanitarian procrastination.” Addressing the problem near the end of a drought is much less efficient and exponentially more costly.
The time to act is before we see a wave of hunger and poverty hit the Sahel at full speed.

More from GlobalPost: Islamic banking on the rise amid credit crunch