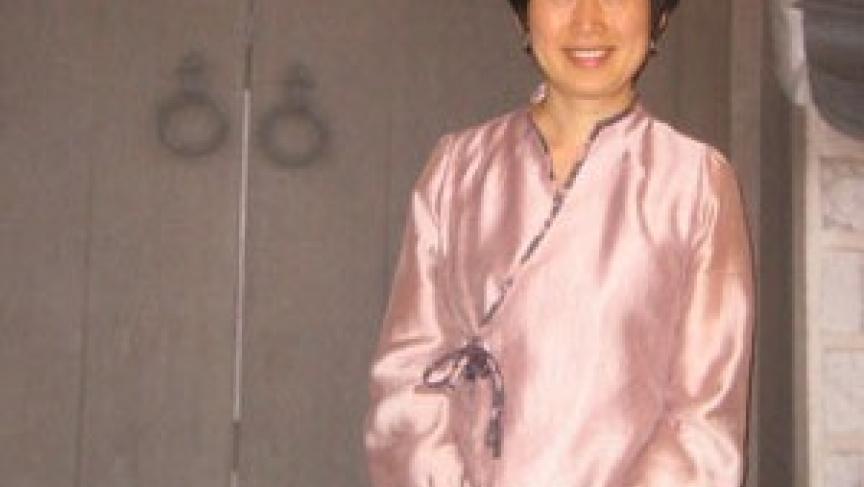 Jane Jeong Trenka is a Korean adoptee who advocates for single mothers. (Photo by Jason Strother.)

On Sunday, families across the United States celebrate Mother’s Day. But there was a special mother’s day celebration on Friday in South Korea, dedicated to women who raise children on their own.

Being a single mom can be hard anywhere, but it’s especially challenging in Korea.

Kim Jee-young, a single mother in Seoul, said that earlier this year she and her son lived in a shelter after losing their apartment. She said they had nowhere else to go.

“It’s very difficult in Korea for an unwed mother to live with her parents,” Kim said. “There is a tremendous prejudice toward single mothers and it’s an embarrassment to the family. My parents would feel ashamed to have us living with them.”

Kim is not her real name. She asked to hide her identity because of the stigma associated with being a single mom.

Unwed motherhood is often kept a secret in South Korea, much like in the United States more than 50 years ago. But on Friday, the stories of women like Kim were told at the second annual Single Mother’s Day ceremony in Seoul.

It’s not just family abandonment. These women sometimes get fired from their jobs, and they’re treated like social outcasts, said Choi Hyung-sook, who heads an advocacy group for unmarried mothers. She’s one herself. Choi said most pregnant single, women in South Korea have only two choices.

“When I was eight months pregnant, my brother told me that I should have an abortion,” Choi said. “If not that, then I should put the baby up for adoption.”

Choi said after she gave birth, she did bring her infant son to an orphanage, but quickly changed her mind. International adoption has long been the last resort for pregnant single women in Korea, who were told they were unfit to be mothers.

It started in the 1950s, after the Korean War. Since then, at least 150,000 Korean babies have been sent overseas — most to the United States. Some of those adoptees have come back to Korea as adults, like Jane Jeong Trenka. She was born in 1972 and adopted with her sister by a family in Minnesota.

Now she advocates on behalf of unwed Korean mothers. Trenka is president of TRACK, Truth and Reconciliation for the Adoption Community of Korea, a group that opposes international adoption.

She said South Korean policies continue to make it financially difficult for single women to raise children on their own.

“Because Korea is so prejudiced against women having children out of wedlock, they prioritize their money in a way that favors orphanages over being cared for by your own mom,” Trenka said.

Shannon Heit, who is 30, said the way unwed mothers are treated in Korea made her and other adoptees want to support them and get involved in Single Mother’s Day.

“We imagine our own mothers, if they had such support from people like us, or from politicians or the government, maybe it could have been different” for them, she said.

Heit added she’s glad to see that, these days, more single mothers, like Kim Jee-young, are willing to keep their children.

As for Kim, she said for now, things look pretty good. She has a part time job and she’s also studying to become a realtor.

But she begins to tear-up, when she talks about her son’s future. She said she’s worried about when he gets older, when teachers and other parents find out his mother isn’t married.

Then he too will feel ashamed.