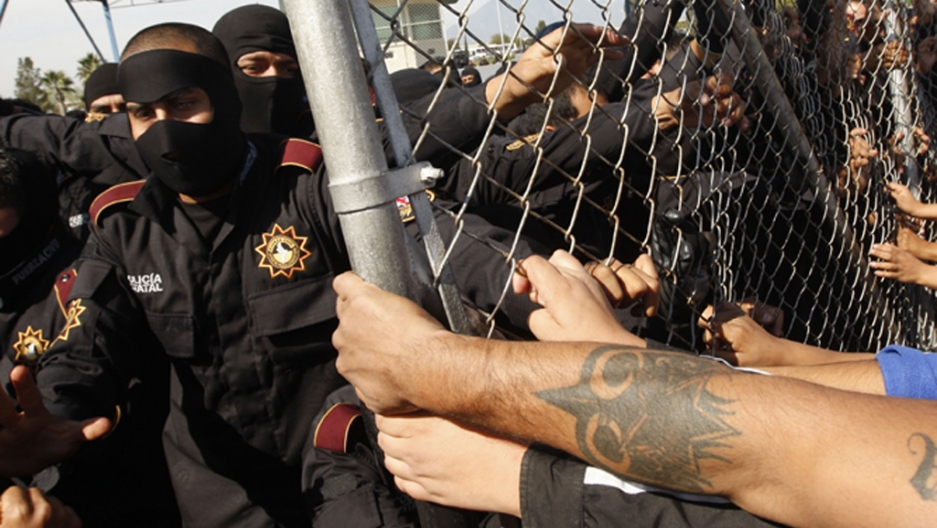 Relatives of inmates at Mexico's Apodaca prison attempt to trespass the security fence following a riot inside the prison, on Feb. 19, near Monterrey, state of Nuevo Leon, Mexico.
Credit: JULIO CESAR AGUILAR
Share

MEXICO CITY — When 800 police officers stormed a prison in Sonora state in April, they found a cache of homemade knives, drugs and personal electronics. A similar raid last fall in Acapulco uncovered much of the same — along with bottles of liquor, prostitutes and even peacocks.

The raids may sound shocking to non-Mexicans, but what they uncovered was merely a symptom of far more serious problems. Simply put, the country’s prisons are a mess, and ill-equipped to handle the glut from the government’s crackdown on drug cartels and organized crime — a campaign that has claimed more than 47,000 lives since December 2006 and jailed thousands. Some 330 of the deaths have occurred behind bars, the newspaper Reforma reported.

As such, the system has taken on an order — or, more accurately, an appalling, entrenched disorder — of its own.

The problems stem primarily from a lack of control. Corruption is rife among guards and wardens, who have been implicated in abetting mass escapes and allowing mafias to charge inmates fees for simple comforts such as sleeping on bunks.

To be sure, their job is by no means easy. They have been murdered with disturbing regularity; an ex-army officer appointed deputy warden of the lockup in the northern city of Torreon was gunned down as he rode in a taxi last week.

The inmates often wield more power than the guards as self-rule by the incarcerated is common. A National Human Rights Commission report found evidence of prisoners having access to keys and computers.

"The prison system is the perfect metaphor for security drama this country is living through," said Alejandro Hope, security analyst at the Mexican Center for Competitiveness, a Mexico City think-tank. "You have them in prison ... and you can't control them."

The Mexican Constitution champions the prison system as rehabilitative, but instead it functions as a crime college and holding pen for thousands of small-time offenders and petty thieves.

An estimated 40 percent of those in jail are awaiting trial and have never been convicted of any crimes by the country's notoriously slow courts, Hope says.

Jurisdictional disputes between federal and state officials only aggravate the situation further. Prisons run by state governments house roughly 90 percent of all inmates, including many convicted of crimes classified as "federal," that involve drug, weapons and organized crime offenses.

These inmates mix with a general population of less-dangerous prisoners and those held awaiting trial. A study from the CIDE university found that in half the cases of inmates imprisoned for theft, the amount was less than 5,000 pesos (roughly $400).

While overcrowding is common, especially in Mexico City’s prisons, Hope says the correlation between too many inmates and riots and escapes is weak. He points to the jails in Tamaulipas state, which have cartel conflicts and have been the sites of multiple mass escapes.

Officials in some prison systems complain that mixing federal convicts with the general inmate population "contaminates" their facilities, however.

More from GlobalPost: Latin America's push to 'legalize it'

Policy analyst Edna Jaime of the think-tank Mexico Evalua (roughly Assess Mexico) calls those complaints disingenuous. State governments are paid to accept federal prisoners, she says. She notes that Mexico's 31 states and the Mexico City government now receive about five times more federal funding for security than five years ago, but often have failed to account for their spending or completely comply with conditions such as subjecting state police and prison guards to drug and polygraph exams.

Still, the Mexican government recently announced nearly $1 billion to fix up state prisons. The announcement came in the aftermath of 37 inmates, allegedly members of the Los Zetas drug gang, escaping in February from a state-run prison near Monterrey. Another 44 inmates belonging to a rival cartel were murdered in their cells that same night.

The Nuevo Leon state government later sacked 26 guards, who were accused of abetting the escape. President Felipe Calderon said the county prisons in Nuevo Leon and neighboring Tamaulipas were in crisis. Interior Secretary Alejandro Poire insisted that all of the worst incidents happened in state-run prisons — not the federal system.

The federal government has announced it would build eight new federal prisons by the end of 2012, adding to12 already existing facilities.

It remains unseen if the country's federal prisons will do a better job. Reforma newspaper reported 37 percent of the 941 prison disturbances over the first 10 months of last year happened in seven federal prisons. Jaime, meanwhile, says evidence showing the superiority of the federal system is lacking.

The federal government also wants guards to be better trained and vetted to root out corruption, but some observers say it's tough to eliminate.

The cartels often "know where the guards live," says Rev. Robert Coogan, a Catholic priest and prison chaplain in the industrial city of Saltillo. There, the warden was murdered last year and the head guard disappeared in an abduction.

Coogan also questions the commitment to improve prisons. His lockup, located 200 miles southwest of the Texas border at Laredo and under control of Los Zetas, has been raided twice by the police since January. That involved tearing apart his prison chapel and removing inmates' microwaves, TVs and video game consuls.

Los Zetas, he alleged, "received word of the visit and scrambled to make sure the damage to them was minimal."

The priest also noted that Los Zetas' prison leaders had adopted a dog — which was never discovered during the two raids.