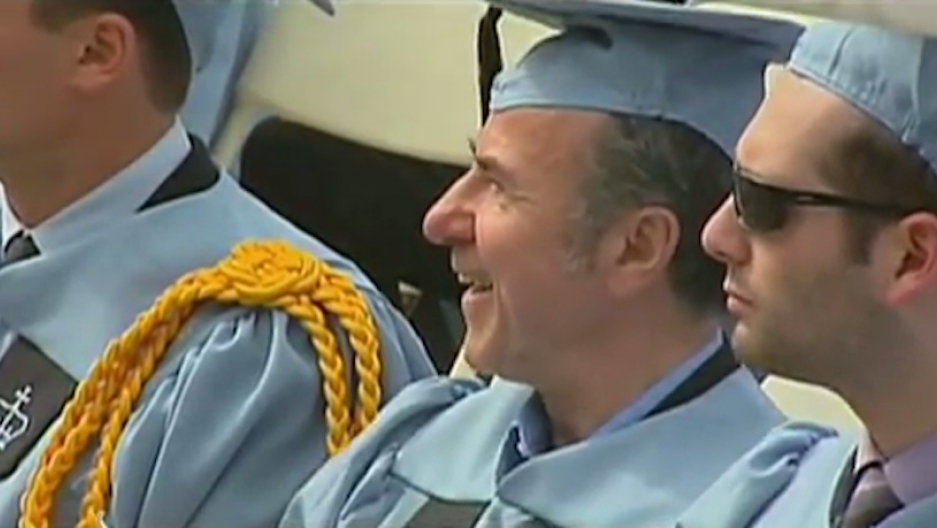 Gac Filipaj (middle), 52, a janitor at Columbia University, graduated from the Ivy Leagues school on Sunday with a bachelor's degree in classics with honors after 12 years of study.
Credit: Al Jazeera
Share

Gac Filipaj, 52, a refugee from war-torn Yugoslavia, eked out a living as a janitor at Columbia University while studying at the Ivy Leagues school for 12 years.

Filipaj took a break from mopping floors, cleaning toilets and taking out the trash at student union building Lerner Hall on Sunday to attend his graduation ceremony, where he received his bachelor's degree in classics with honors, according to the Associated Press. His favorite subject? The Roman philosopher and statesman Seneca.

"I love Seneca's letters because they're written in the spirit in which I was educated in my family: not to look for fame and fortune, but to have a simple, honest, honorable life," Filipaj told the AP.

Filipaj came to the United States from Yugoslavia in 1992, leaving behind his parents and siblings on a family farm in Montenegro, reported ABC News. When he arrived in New York he spoke very little English and settled down in the Bronx, where he started taking English classes at Theodore Roosevelt High School. He worked at Columbia for six years while learning English before he was proficient enough to enroll in classes part-time, using the university's tuition exemption for employees.

The Ivy League-educated janitor would take classes during the morning and then work as a "heavy cleaner" from 2:30 p.m. to 11 p.m., according to the AP. He would then open his books, sometimes reading in ancient Latin and Greek, and pulling all-nighters to finish a paper or study before a big exam.

Filipaj now wants to take a semester off to continue working and then plans to start studying again, probably at Columbia where he can still get the tuition exemption, reported ABC.

"I would like to go to graduate school, either for a masters or, even better, for a PhD," he said to ABC with a smile.