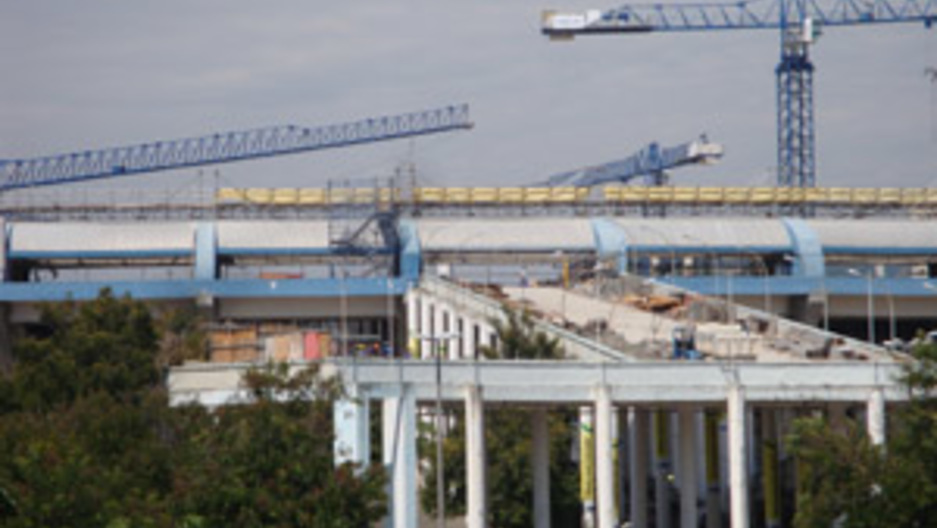 Share
For decades, Brazil saw its citizens look beyond its shores for work. But these days, the South American nation is playing host. A burgeoning oil and gas industry — and preparations for the 2014 World Cup and 2016 Olympics — are the latest fuel feeding Brazil's economic engine. Among the places seeing a rush of people headed to Brazil: its former colonial master, Portugal. Ines Sousa came to Brazil for a new start. In January, the 25-year-old from Portugal decided to leave her home country and join her Portuguese boyfriend, 5,000 miles away in Brazil. "I came with two bags to live here and I didn't know the place. I've never been before. I came to live and work here," said Sousa. Unemployment in Portugal stands at more than 15 percent. And Portugal is enduring its third recession in four years. In that environment, Sousa realized that her master's degree in international relations wouldn't be enough to secure her a good job back home. And she's not alone. Sousa is one of thousands of Portuguese flocking to Brazil. "I really love Portugal. It's an amazing country and I really want to live there later. But now, I wouldn't be able to pay for a room. Your family and yourself invest so much money and time and patience and for such a long time. It's really hard to live there now," Sousa said. Sousa works part-time at an non-governmental organization while she looks for permanent work. Her boyfriend, Francisco Cruz, had an easier time when he moved here a few months before her. But he's a civil engineer. In his industry, business is especially good, with lots of construction projects underway in preparation for the upcoming 2014 World Cup and 2016 Olympics. So he and others like him are seizing the moment. "In Portugal, things are really bad because of the crisis. And here things are so good, and even better for engineers because there's so much work to do, so many things to do. So I noticed if I wanted to move to come here, it was the right time to come," said Cruz. Brazil's government says the number of Portuguese workers in Brazil shot up from 277,000 in 2010 to at least 330,000 last year — and that's just the people here legally. This isn't the first time the Portuguese have looked to their former colonies for their own economic survival. Sousa's grandparents made the same journey decades ago. But unlike that generation, which earned a reputation for being hard-working, manual laborers — many of today's Portuguese migrants are armed with college degrees and better. "This is the saddest thing of all. Portugal is a country that could give us a good education and prepare us for this competitive world but couldn't give us a job and that's just crazy," said Rui Matos da Costa, a Portuguese lawyer who's lived here since last year. While Brazil's economy has taken a dip recently, it's still relatively strong. In April, it surpassed the UK as the world's sixth largest economy. Da Costa says the shared language and bilateral cultural exchange through television and film made Brazil a natural choice. He's now licensed to practice law in both Portugal and Brazil. Over a plate of traditional Portuguese pastries, da Costa explained what he saw at home in Portugal was a struggle ahead — for all generations. "Right now, people feel like there's no future. Not only for my friends of my age, but for my parents as well. It's really hard right now. There is no Portuguese dream," said da Costa. That's the prevailing attitude among the many Portuguese who now call Rio home. As they have so many times before, they seem to have accepted their fate. And Brazil has accepted them — despite Portugal's one-time subjugation of its former colony. "We treated them really bad and now, we kind of need them. And they're being better for us, than we were to them. I think it's fair to say it," da Costa said. In Rio, it certainly seems like the past is the past. "They come here, they do well. But they are really hard workers. That's for certain. Brazil accepts everyone," said Jose Barros, a Brazilian who has spent 30 years working as a waiter at a Portuguese restaurant. He says Brazil welcomes all immigrants, and the Portuguese are no exception. Although visa regulations don't always make it easy for migrants to work here legally, many are desperate enough to come anyway, hoping permission to work will work itself out. Economist Marcelo Neri says the current situation is a win-win for everyone: The Portuguese need jobs and Brazil needs more skilled workers. "The labor market is doing pretty well and there's a lack of well-educated people. I think Brazil is really a land of opportunity. Especially during the current scenario, to work here, you earn good money, there's a need for highly skilled professionals," Neri said. Hugo GonÃ§alves, a Portuguese journalist based in Rio, recalled the outrage when officials back home — including Portugal's prime minister — actually advised people to leave the country if they couldn't find work. "I guess he was being honest but if you're the prime minister, it's your job to provide that people from that country can stay in that country. At least that," said GanÃ§alves. "When you say you have to go, even if it's sincere, it's almost like you're saying, well, 'I don't care anymore.'" Back at her new place, Ines Sousa says she's planning to stay for at least a few years. But being so far from home was hard from the start. "I came to Brazil in January and my grandmother died two weeks after. It's weird for me — it's like a cycle and Brazil is in the story. It was really sad because I couldn't be there," Sousa said. And there's the looming question of how the hemorrhaging of Portugal's best-educated generation will affect the ailing country if, and when, it ever gets back on its feet.