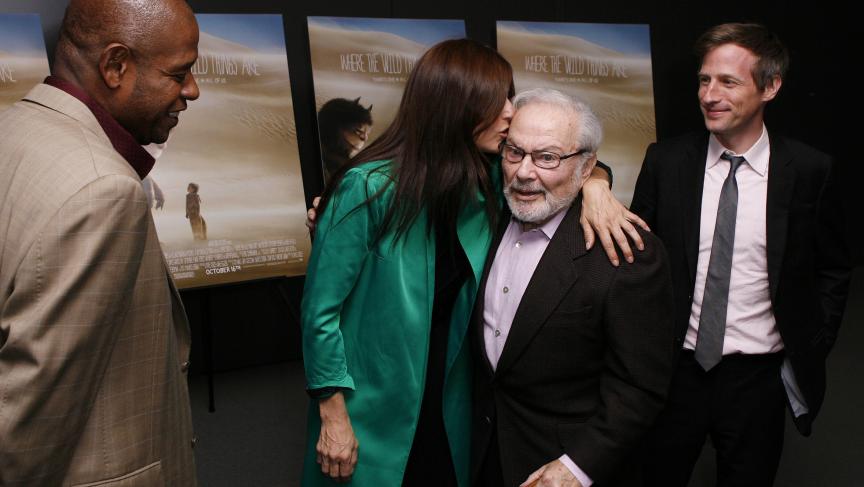 Author Maurice Sendak stands with director Spike Jonze (R) and actors from the film adaptation of "Where The Wild Things Are" at its premiere in 2009. (Photo courtesy of Reuters/Lucas Jackson).

American literature lost one of its literary giants this week.

Best known for his breakthrough 1963 picture book Where the Wild Things Are, Maurice Sendak's long, colorful career involved one wild rumpus after another. Sendak’s work was often powerfully dark, in the manner of the old Grimms’ fairy tales.

Wild Things might be a nightmare, with its chaotic dreamscape and its ferocious, smothering monsters, but children loved it, critics loved it, parents loved it. It changed the way America thought about books.

"You have to remember, he's from a generation where picture books were considered trash," said Mo Willems, an acclaimed children's book author who was reared on Sendak. "We don't have that problem anymore. I don't have to worry about whether somebody considers my work art or not."

When Willems set out to write his first book, Don’t Let the Pigeon Drive the Bus!, he turned instinctively to Sendak.

“Because I didn’t really know what I was doing I needed to steal some material,” Willems said. “So the best place to go was Where the Wild Things Are to find inspiration, particularly in terms of design and craft.”

Sendak was frequently ill as a child and confined to bed. The Holocaust loomed large in the minds of his immigrant Jewish family. He hid his homosexuality for much of his life. This early exposure to disillusioning experiences crept into Sendak's books in fantastical ways — as in In the Night Kitchen, where a child is put in an oven to bake.

"He was called ‘Morose Sendak’ by most of his friends," Willems says.

But he also believed children were capable of dealing with the disappointments of the world.

"Even as a child, I was well aware that childhood sucks!” Willems said. "I felt a kinship with Max in Where the Wild Things Are. I felt put upon.”

Although Willems’ books are much more lighthearted, like the Pigeon series and the Knuffle Bunny trilogy, they’re informed by that melancholy.

"It's just not easy to be a child," he said. "If you're doing something you want to do and somebody doesn't want you to do it, they can literally, physically lift you up and fly you into another room. You have to ask permission to go to the bathroom. I mean, it's a terrible time."

Sendak’s Max — sent to bed without supper, embarking on death-defying adventures, and finally, arriving home to find supper waiting for him, still hot — gave generations of childhood permission to acknowledge that life can be hard.

"I don't think I saw it as grim,” Willems recalled, “so much as liberating."