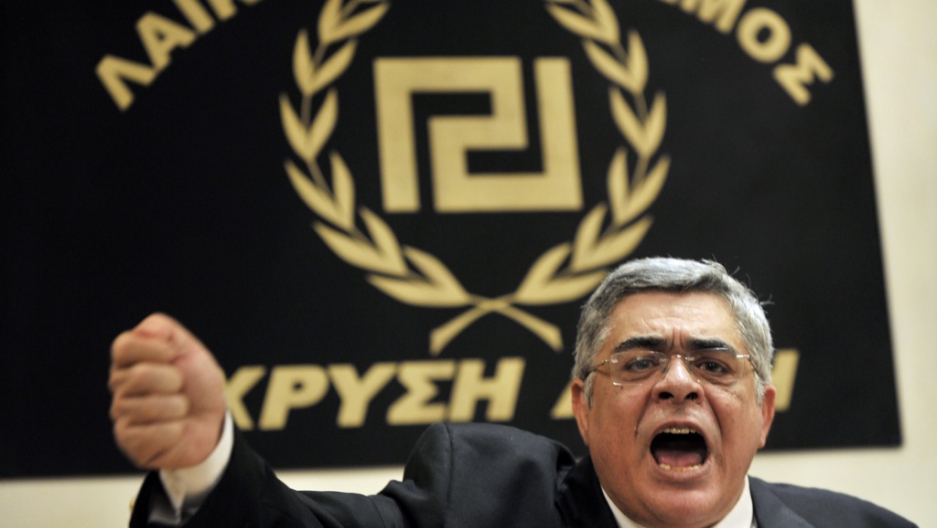 Political leader of the far-right party 'Golden Dawn', Nikolaos Michaloliakos speaks during a press conference at an Athens hotel on May 6, 2012, after the first results of the Greek general elections. The Greek neo-Nazi Golden Dawn party will enter parliament for the first time in nearly 40 years, exit polls showed on Sunday as ballots closed in an early election that could derail the country's reforms.
Credit: LOUISA GOULIAMAKI
Share

BRUSSELS — Newly elected to parliament, the leader of Greece’s Nazi-inspired Golden Dawn party had a chilling message that resonated way beyond the borders of his troubled country.

“For those who betray this homeland, the time has come for fear. We are coming,” barked Nikolaos Michaloliakos, in a post-election press conference. “Greece is only the beginning.”

The election to the Greek parliament of 21 lawmakers under Golden Dawn’s swastika-like banner is symbolic of how the three-year economic crisis is radicalizing politics in much of Europe.

In the first round of France’s presidential elections, far-right candidate Marine Le Pen recorded the best-ever score for her National Front party, with 17.9 percent. Communists and other far-left groups also picked up over 12 percent of the vote.

In Italy on Sunday, the Five Star Movement of anti-establishment comedian Beppe Grillo was a big winner in local elections at the expense of mainstream parties that support the technocratic government’s austerity drive.

“A social earthquake is about to happen,” Grillo blogged as his party scooped 19 percent of votes in Parma, 14 percent in Genoa and over 10 percent in several other cities. “The Five Star Movement is the change that cannot be stopped.”

Grillo warned that unless mainstream politicians heed his call for an end to austerity, voter support for the likes of Le Pen and Michaloliakos is inevitable.

The radical anti-Islamic Freedom Party, which is the third largest party in the Dutch parliament, brought down the center-right government last month in protest over austerity measures. Its firebrand leader Geert Wilders is adding calls for the Netherlands to leave the euro-zone to his trademark anti-immigration rhetoric in preparation for September elections.

In Ireland, the IRA’s one-time political wing, Sinn Fein, is seeing its support surge as it campaigns for voters to reject the EU’s fiscal treaty in a May 31 referendum.

The far-right remains marginalized in Germany. Protest voters there have found an outlet in the Pirate Party, which scored over 8 percent in Sunday’s state election in Schleswig-Holstein, building on similar scores in Berlin and Saarland. If they match that at a national level, the Internet-freedom campaigners could become important players in German government coalition building.

The quirky Pirates are a world away from Golden Dawn’s black-shirted, stiff-arm-saluting heavies, but they are joining them in riding a wave of disillusion with mainstream politicians.

Golden Dawn has been around the since the 1980s. Its followers have been regularly accused of violence against immigrants or left-wingers, sometimes with lethal effect. Until the euro zone crisis ravaged the Greek economy however, it was not considered a serious political threat. Sunday’s election also saw voters switch to the far left. Together, parties at both extremes denied a majority to the mainstream socialists and conservatives who have dominated Greek politics since the end of military dictatorship in 1970s.

For some, such a radicalization has ominous historical overtones. On a visit to the Nazi extermination camp at Auschwitz on Wednesday, Belgian Prime Minister Elio di Rupo compared the current economic slump with that in Germany in the 1930s which preceded the rise of Hitler. “Today, we are confronted by a new economic crisis and the threat continues,” di Rupo said.

Among German politicians there is a deeply ingrained fear of the hyperinflation that wiped out the savings of millions in the 1920s and is blamed for undermining Germany’s democratic institutions. Angst over inflation underpins the German government’s insistence on fiscal discipline and austerity in the current crisis.

There are growing voices in Europe now who feel that the Germans have developed a selective historical memory when it comes to learning the lessons of that period.

At the start of the crisis, an EU official warned that Germany would “squeeze until blood runs from the stones of the Acropolis” in return for German taxpayers’ money being used to bail out the spendthrift Greeks. His words were a disconcerting echo of the victorious allies’ push to “squeeze Germany until the pips squeak” after World War I.

The Treaty of Versailles demanded Germany pay the allies 269 billion marks, the equivalent of around $830 billion in today’s money. Germany’s struggle to pay undermined its economy, and the resultant humiliation and hardship aided Hitler’s rise to power.

Berlin’s current insistence on relentless economic belt-tightening despite the recession in Greece and other southern European countries is likened by some to the short-sighted approach of the allies in 1919.

More from GlobalPost: Worked Over: The Global Decline of Labor Rights

“If you push countries to a situation where they have no hope and no light at the end of the tunnel … people will turn to simplistic and sometimes downright nasty solutions,” Alistair Darling, Britain’s former finance minister said Wednesday. “The European (fiscal) treaty has the same foresight as the Treaty of Versailles where you institutionalize a downward spiral.”

Rather than Versailles, austerity opponents say the European Union should take its inspiration from the US approach to defeated Germany after World War II, and produce a Marshall Plan to revive the economies of its struggling southern members.