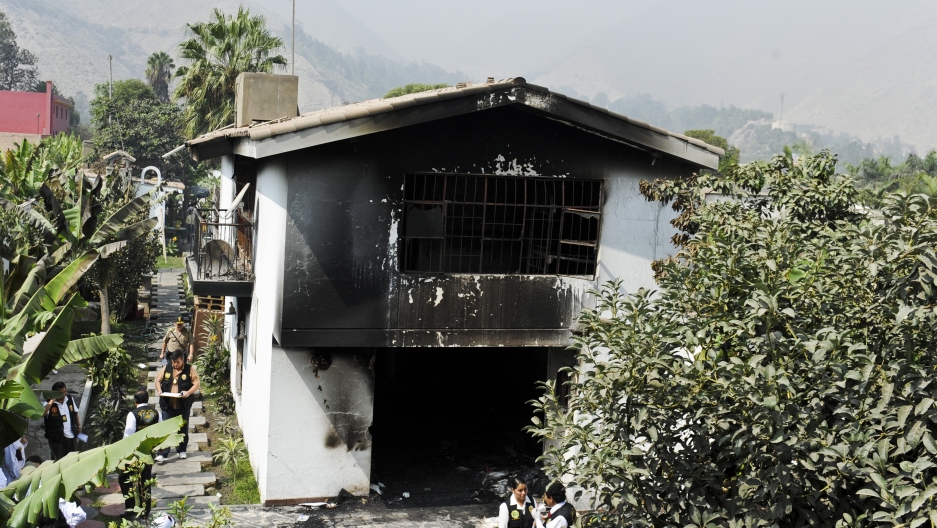 The Sagrado Corazon de Jesus drug rehab in Lima, Peru after a fire swept through killing over a dozen patients locked in their rooms on May 5.
Credit: ERNESTO BENAVIDES
Share

LIMA, Peru — A recent blaze at a drug rehab in this South American country has stirred debate over its controversial cold-turkey clinics, where addicts are locked away against their will. When fires spread, there's no escape.

As many as 14 people are believed to have died in the blaze in the Sacred Heart of Jesus Center, in a house in Chosica, a town on the eastern outskirts of Lima, in the early hours of May 5.

According to local firefighters, 13 of the dead were located on the second floor, and had been unable to escape due to bars on the windows and padlocks on the doors.

Trapping addicts is common practice here, where despairing relatives typically pay $250 to have family members with severe drug problems treated against their will. There are thought to be around 400 such centers in the country, half of them in the capital, Lima.

Preliminary investigations show that, unlike many others, the rehab in Chosica did have a municipal license to operate. But it remains unclear whether it had the other necessary paperwork or was staffed by qualified personnel such as doctors, nurses or psychologists.

“Unfortunately, the majority of treatment centers operate in residential houses which have been adapted to house up to 25 people with problems with drugs or alcohol,” Milton Rojas, director of addiction nonprofit CEDRO, told La Republica newspaper.

“We need to improve and strengthen the treatment communities, and for them to enter a phase of professionalization and formalization. There should not be rooms with bars or chains or padlocks. The tragedy of Chosica should not happen again.”

Wilfredo Peraza, a former head of Peru's national penitentiary department, added: “Not anyone can just set up a rehabilitation center. These should operate under the charge of a professional such as a doctor, psychologist or psychiatrist. But, in reality, we see how ex-addicts create their own centers and apply their own laws.”

Peru has around 100,000 people addicted to cocaine, crack and coca paste, a relatively cheap, semi-processed version of cocaine, according to the government’s anti-drug agency DEVIDA.

But the agency also calculates the number of places in state-run addiction treatment centers to be just 700.

Until that changes, the demand for informally run, private clinics — where patients going cold turkey are forcibly prevented from leaving in search of a fix — is unlikely to drop.

That is especially the case given the growing consumption of cocaine, crack and cocaine paste in Peru’s cities.

In a statement, DEVIDA head Carmen Masias called on the Health Ministry “to realize that this is an urgent problem which requires rapid and creative measures” to bring the private addiction treatment centers into line with medical best practice and the law.

The Chosica tragedy is the second involving such an addiction treatment center to occur this year in Peru. In January, 29 patients died from burns and smoke inhalation in the Christ in Love clinic, in Lima’s San Juan de Lurigancho neighborhood.

Those patients had also been trapped by window bars and locked doors.

That blaze sparked a political dispute. Health authorities are now putting the final touches to new rules, due to be published later this month, including banning the practice of locking up patients.

Yet it remains to be seen what difference those rules will make in a country where corruption is endemic and flouting the law — including bribing officials — is commonplace.

In Chosica, meanwhile, the authorities are awaiting the results of DNA tests to confirm the number of dead as few of the victims had dental records. Four are thought to have been minors and another the center’s director, Carlos Tapia Vargas.

The sole survivor, patient Alberto Luis Zevallos, meanwhile, was helping with a police reconstruction of the tragedy.

“I was trapped for nearly an hour,” he told reporters. “I saw several of my friends fall unconscious because of the smoke, and I heard cries of pain and for help. It was a nightmare which I can’t wipe from my mind.”

He eventually escaped after jumping from a second floor window down a ventilation shaft, bruising his face as he fell.

Prosecutors have said they expect to know within the next two weeks whether they will be charging anyone in connection with the fire.