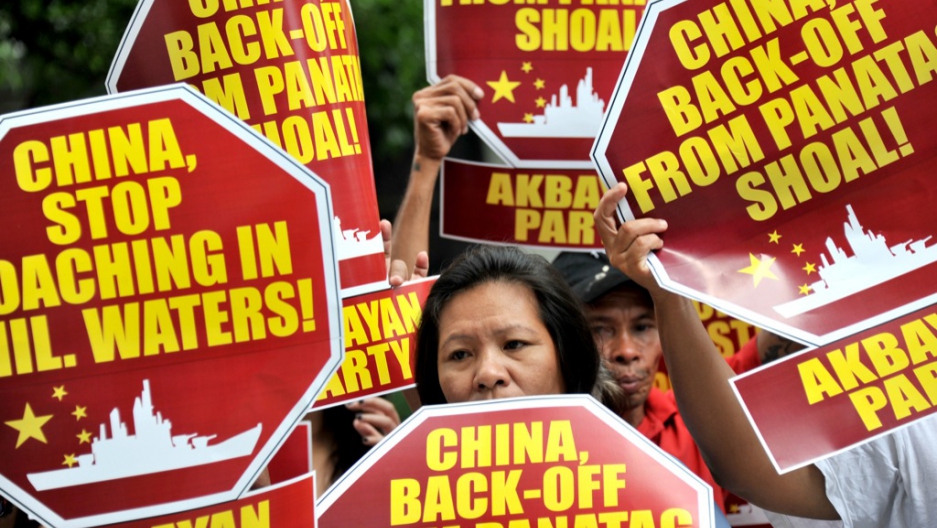 Activists hold a protest in front of the Chinese Consular Office in Manila on April 16, 2012, demanding the Chinese government to immediately pull out from Scarborough Shoal. According to the Philippines said it remained locked in a stalemate with China over a disputed shoal in the South China Sea.
Credit: NOEL CELIS
Share

HONG KONG, China — Far from cooling off, the standoff between China and the Philippines over the Scarborough Shoal — a handful of rocks in the South China Sea — has risen to a boil. China has slapped extra inspections on imported Philippine fruit. The Philippines is organizing global protests against Chinese bullying. Bloggers on Sina Weibo are urging Beijing to boycott the Philippines — or go to war.

But is the standoff headed for an armed confrontation? Andrew Billo, an expert on the region at the Asia Society, says it's unlikely. In a Q&A with the GlobalPost, he outlines the options for resolution in the latest heated confrontations in the South China Sea, and the risks to the US from supporting its allies in Manila.

How serious is the risk of an armed confrontation in the South China Sea now?

Tensions are certainly higher with respect to the South China Sea at present, but the risk of armed confrontation is relatively static. While the US has cooperated with the Philippines in joint military exercises, it also re-asserted its neutrality on the South China Sea issue. Confrontation with respect to disputed territories in the region has existed for decades, and while resolution is yet to be achieved, serious armed confrontation is unlikely given the sea's importance for global commerce and trade.

What are the risks of real or perceived US involvement in the standoff?

The US's stronger military presence in Asia has exacerbated the situation, particularly as it has emboldened the Philippines to take a stronger stand against China. It also has resulted in China's leadership making stronger assertions with respect to its South China Sea claims. The fact that the US is yet to ratify UNCLOS, which would provide a neutral arbitration mechanism, does limit America's credibility in stating its commitment "to a rule-based regional order."

What are the prospects of resolution?

The likelihood of formal resolution remain weak, whether through ASEAN, UNCLOS, or on a bilateral basis. If ASEAN could come to agreement with respect to the Code of Conduct, that may be a viable first step. But within the ASEAN states, there are still too many competing territorial claims that need to be ironed out for this agreement to be viable. The only viable resolution is for regional claimants to agree to sharing resources, as it is unlikely that any of the stakeholders will cede their territorial claims altogether. Therefore, the current military standoff, to the extent it exists, must be defused, and then piece by piece, the regional claimants must put together a workable agreement. This should come in the form of joint energy exploration activities, which would allow parties to stake their claims, without suffering an embarrassing, outright territorial loss on the deal.

To what extent is a more confident, assertive China the cause for these tensions?

China certainly shares much of the blame for the current standoff. Its claims to the South China Sea, based on limited historical evidence, do not provide a significant basis to make sweeping, unilateral assertions. By taking a strong stance, and by drawing on nationalistic domestic tendencies, China has made it more challenging to find resolution. Nevertheless, China, perhaps through informal channels, should leave open the possibility of cooperation with its ASEAN neighbors toward exploratory activities. China, as it does in its relationship with the US, needs to build trust with its regional neighbors and this may be achieved by taking predictable, rational actions on this issue.

Given allies' expectations and the geopolitical risks, what would be the wisest role for the US to take in the South China Sea?

At present, the US should take a step back from the issue, particularly with respect to its military alliance with the Philippines. It has made its point with respect to its support for a key ally, and the region as a whole, but ultimately it is in the US's interest to have regional stability and not allow the conflict to escalate further. China also has no interest in a military engagement with the US The US should limit its interest to preserving and maintaining the maritime routes in the region, while encouraging all regional parties with territorial stakes to forge a viable agreement that encourages the sharing of disputed resources. Ratification of UNCLOS would also send a strong signal that the US supports resolution of international disputes through multilateral mechanisms, rather than simply on terms that are convenient to its own interests.

More from GlobalPost: China-Philippines standoff: Will the US military get involved?