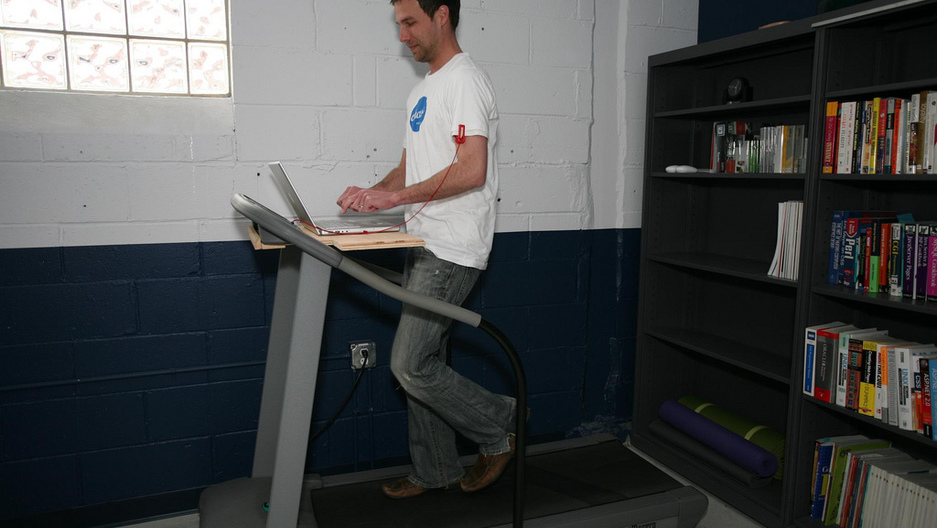 A man using a treadmill desk to maintain metabolic activity while at work (Photo courtesy of massdistraction/flickr).

Extensive periods of sitting contribute to bad cholesterol, weight gain and limit muscle contractions. A study led by epidemiologist Steve Blair demonstrated a strong link between sedentary activity and death from heart disease among adult men. According to researchers at the University of North Carolina at Wilmington, people gain 16 pounds on average, within 8 months of starting sedentary office work.

Mayo Clinic cardiologist Martha Grogan said sitting for prolonged periods of time every day is as damaging to heart health as smoking.

So why does sitting in a car, on a couch, or at a desk take such a toll on our bodies? One explanation Blair offered is sitting slows down metabolic activity.

"If you're sitting, your muscles are not contracting, perhaps except to type. But the big muscles, like in your legs and back, are sitting there pretty quietly," he said.

The most surprising, and perhaps the most daunting findings in the new research show intensive exercise does not override the negative effects of prolonged sitting.

"Even if you get up in the morning, get on your treadmill for 30 minutes, and you think you've done your exercise for the day, and then you just go sit around and do nothing, you've unwound all of that benefit you made in the morning," Blair said.

"Active couch potatoes" are not exempt from damaging effects of sitting. A study by Australian researchers, published in 2010, found that even among people who exercised regularly, participants who reported sitting for more than four hours a day doubled their rate of serious heart problems.

Luckily, the best way for people trapped at their desks to combat the unfavorable effects problems of sitting doesn't involve more hours at the gym.

"If you are working in a situation when you're at your desk a lot, get up," said Ron Winslow, senior writer for health and science at the Wall Street Journal. "Instead of sending an email to a colleague across the room, get up and talk to them."

The Department of Health and Human Services guidelines recommend adults get an average of 30 minutes of exercise every day to reduce the risk of heart problems by 70-75 percent, but Winslow says a 10-minute walk can positively impact health as well.

"A 10 minute walk actually reduces your risk for bad heart problems by about 50 percent," Winslow said. "A lot of us might see that 30 minutes a day thing, and you've got a very busy schedule and think, 'I just can't get that in today,' and you take it at an all or nothing. If you can't hit the target then you dont even try. But researchers at the Mayo clinic looked at the curve which shows the 70 to 75 percent benefit, and midway down the curve there's still a significant reduction in risk."

Winslow recommends other simple preventative measures such as regularly checking blood pressure and cholesterol levels, as well as standing up throughout the day, even working at a standing desk. He also recommends people smile more.

Winslow cited a study conducted by researchers who looked at photographs of 230 baseball players who played before 1950. The researchers found a strong correlation between the amount each player was smiling and their life span. Players who were not smiling lived an average of 73 years, partial smilers lived to be 75, and the players with a full smile made it to be 80.

"It's not the most rigorous science you can imagine, but it does reflect other research, which shows that if you're a happy person, if you have an optimistic outlook, if you have a purpose in your life, your risk of heart disease is lower," Winslow said. "If you happen to get heart disease it doesn't progress as fast and you recover sooner."