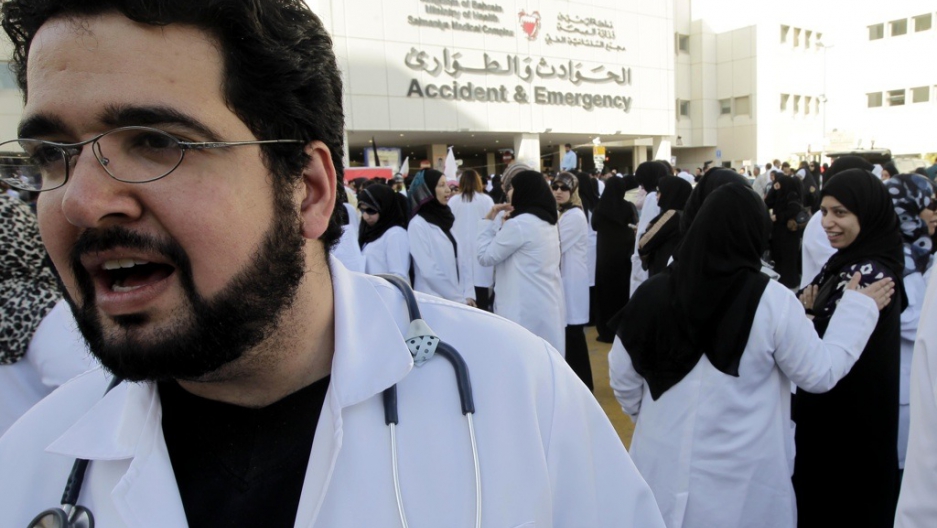 MANAMA, Bahrain — Peering down from the front of the triangular courtroom hangs a framed portrait of King Hamid bin Isa Al Khalifa of the tiny Gulf state of Bahrain. Flanked on either side of his image — ubiquitous throughout the country — are two security cameras. Below the king’s image sit a three-judge panel atop their dais, the general prosecutor and court stenographer.

Ten defense attorneys stand before them in a semi-circle. On trial are 20 Bahraini health professionals sitting in three rows on the right. Among two dozen observers, I sit in the second row on the far left. One of four security guards abruptly yells in Arabic, “Court!” and we jump to our feet. Another hearing begins.

Having followed the doctors’ plight ever since I first visited Bahrain during last year’s Arab Spring demonstrations, I recall my first interviews with their bereaved families. They recounted the unimaginable horrors their loved ones suffered when they disappeared last year. Masked and heavily armed security forces from the Ministry of Interior ripped doctors from their beds in the middle of the night. The same government agents stormed into the operating room of one pediatric surgeon, stole him away and detained him incommunicado for months.

Four dozen of the country’s leading medical specialists were similarly detained, tortured and forced to sign confessions. A military court quickly convicted them of spurious charges including inciting hatred of the regime and attempting to overthrow the government.

Chairpersons of medical departments overthrowing the government with their scalpels? Are you kidding? Well, that’s what the Government of Bahrain and its well-paid public relations firms in the West would have us believe.

Under heightened international pressure last year, the Bahrain government transferred the doctors’ trial from military to civilian court, released them on their own recognizance, but suspended them from work and restricted their travel. Twenty medical workers face felony charges and up to 15 years’ imprisonment; the other 28 face misdemeanor charges.

Customary rules of criminal procedure appear wholly absent throughout the more than one dozen hearings that have now taken place at the civilian appeals court. In one court session last November, the prosecutor suddenly produced two decrepit Kalashnikovs and chains as “evidence” against the doctors. This show was met with laughter in the courtroom. According to the prosecutor, the physicians used these weapons to take control of the sprawling medical complex in Manama. Even the king’s own Independent Commission of Inquiry concluded that these allegations were unfounded.

The subtext to this unfolding national spectacle is now clear: The government, led by the hard-line prime minister and minister of interior, sought to take over the one last ministry outside Sunni control — the ministry of health, which until last year was seen as a Shia stronghold.

According to insiders whom we interviewed, hardliners opportunistically took advantage of the chaos of the Arab Spring, detained and convicted some of the leading Shia physicians within the health ministry and supplanted them with Sunni partisans. Although the current minister of health is Shia, most observers say he is mere window dressing for the government to appear non-sectarian. The real power lies with the new deputy minister of health, who is Sunni.

Such politicization of healthcare only further shreds the fabric of a nation in political turmoil. Healthcare should be beyond politics. Today in Bahrain, those who would heal the country’s wounded have become objects of persecution.

Bahrain’s prosecution of some of its leading medical professionals epitomizes a disturbing sectarian chasm that must be addressed and breached. Dropping the trumped-up charges against every one of the 48 medics is a way forward for true reconciliation and reform. President Barack Obama and British Prime Minister David Cameron could lend their support in this regard with more outspoken criticism of their ally’s human rights record.

More from GlobalPost: Islamic banking on the rise amid credit crunch