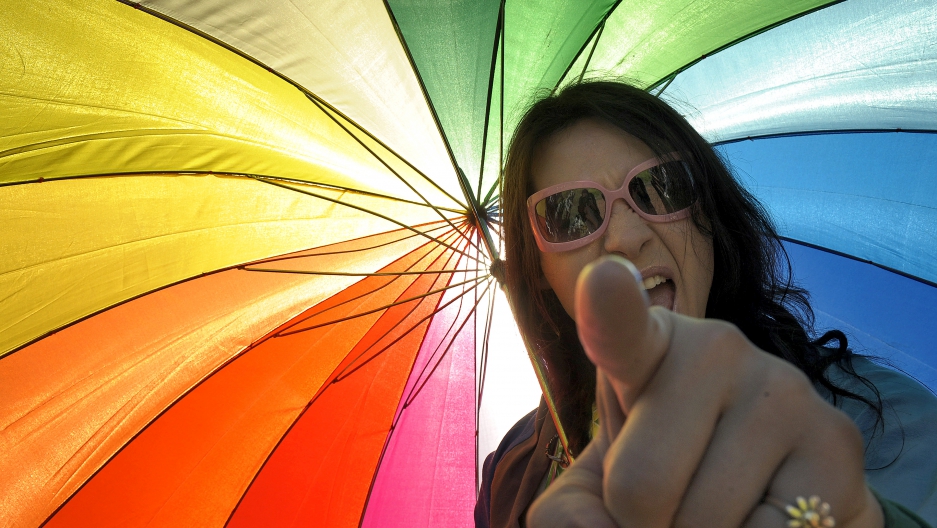 A transexual gestures under a rainbow umbrella during the XVIII Gay Pride Parade in Buenos Aires on November 7, 2009.
Credit: Juan Marbromata
Share

Argentina's Senate passed a new gender identity law 55-0, making the country one of the most advanced in the world in terms of gender rights.

According to The Washington Post, Argentina’s law is the first to give citizens the right to change their legal gender without first changing their bodies.

Justus Eisfeld, co-director of Global Action for Trans Equality in New York, told The Washington Post, “The fact that there are no medical requirements at all — no surgery, no hormone treatment and no diagnosis — is a real game changer and completely unique in the world. It is light years ahead of the vast majority of countries, including the U.S., and significantly ahead of even the most advanced countries."

Katrina Karkazis, a Stanford University bioethicist told NPR, "This law is saying that we're not going to require you to live as a man or a woman, or to change your anatomy in some way. They're saying that what you say you are is what you are. And that's extraordinary. Rather than our more sedimented ideas about what it is to be male or female, this sort of throws all of that up in the air in a really exciting way."

Senator Osvaldo Lopez of Tierra del Fuego, who is the only openly gay national lawmaker in Argentina, told SFGate, "This law is going to enable many of us to have light, to come out of the darkness, to appear. There are many people in our country who also deserve the power to exist."

President Cristina Fernandez is expected to sign the measure into law. It will take effect upon publication in the next official government bulletin.

For more, check out GlobalPost's past coverage of the Global Gay Right's movement.