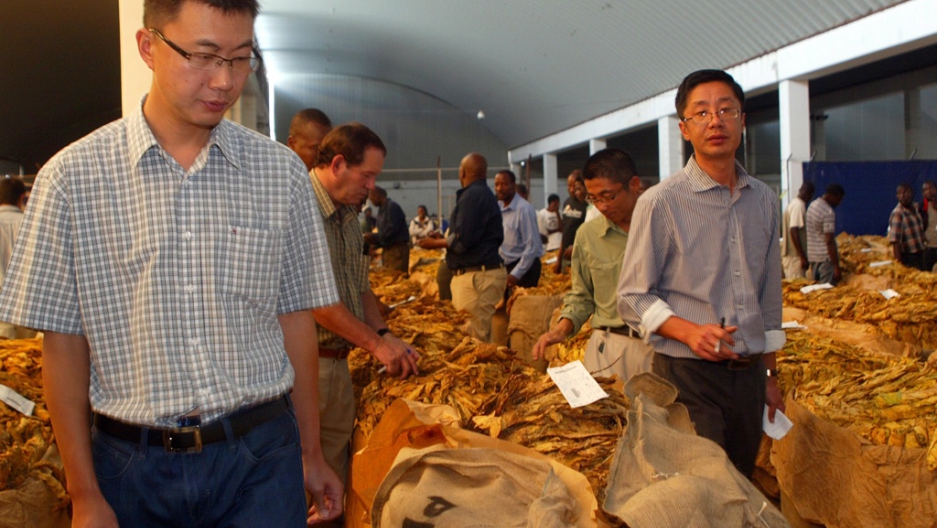 International tobacco buyers look at bales for sale at the official opening of the tobacco selling season at the Boka Auction Floors in Harare on February 15, 2012.
Credit: Jekesai Njikizana
Share

Zimbabwe's hopes to return to economic prosperity largely depend upon its agriculture.

And right now things are looking up, with a remarkable comeback of the tobacco crop, estimated to be 150 million kilograms, according to the Zimbabwe Standard. Last year Zimbabwe sold 131 million kgs for $360 million.

Zimbabwe's tobacco auctions are in full swing, after a slow start February, with international buyers flying in to buy Zimbabwe's fabled golden leaf and local farmers trucking their bales to the three auction floors in Harare. Some are saying it is like the good old days when tobacco was king in Zimbabwe.

There is a big difference. Most of the tobacco farmers are black instead of white. There are nearly 60,000 black small-scale tobacco farmers who bring an average of 10 bales each to the auctions, for which they earn about $5,000. In the old days, there were about 3,000 white farmers who grew tobacco on sprawling farms and they would truck hundreds of bales to the sales floors each year.

In 2008 Zimbabwe's tobacco output fell to a low of 48 million kilograms, according to figures from the Zimbabwe Tobacco Industry and Marketing Board. Then tobacco production started to climb to 123 million kgs in 2010 and then to 131 million kgs in 2011, which was credited being the main driver behind a 34 percent growth in the agricultural sector last year, according to the Financial Times. The current crop is forecast to be 150 million kgs, reported the Zimbabwe Standard.

Agriculture contributes an estimated 20 percent to Zimbabwe's GDP of $6 billion, according to the CIA World Factbook. Other major contributors to GDP are industry at 24 percent and services at 54 percent.

Andrew Matibiri, the chief executive officer of the tobacco marketing board, said farmers are getting favorable prices averaging more than $350 per kg because there is a shortage of tobacco on the international market. Zimbabwe still has a reputation for producing excellent quality tobacco, said Matibiri, according to the Standard.

Chinese are buying about 40 percent of Zimbabwe's crop and Western Europeans about 35 percent, said Matibiri.

Will Zimbabwe's tobacco return to the glory days when the country was always one of the world's top three exporters?

Agricultural experts say there are several obstacles, especially the need for the small-scale farmers to get loans to increase their output. They need more seeds, fertilizers, tractors and heated barns used to cure the leaf. But the black farmers are on land seized from white farmers, and the Zimbabwe state retains title to the land. Therefore most banks will not lend money to the farmers, because the don't have title to the land, according to Zimbabwe Tobacco News.

Other crops that used to be produced by Zimbabwe's white large-scale farmers, such as wheat, coffee and flowers remain in the doldrums, with production much lower than before the land seizures.

I remember going to the massive tobacco auction floors in 2000, before the land seizures started, and seeing row after row of bales of golden leaves for sale, hearing the sing-song cadence of the auctioneer and smelling the overpowering aroma of tobacco. The white farmers' Mercedes and SUVs would be parked out front.

Where are the white tobacco farmers now? There are about 200 whites still farming in Zimbabwe, down from about 4,000. Some of them are growing tobacco. Other white farmers who were forced off their land have now been hired as consultants and farm managers to help new black farmers grow the valuable crop.

The tobacco auctions still appear to illustrate the health of Zimbabwe's agricultural sector, especially because the farmers have changed from white to black and from large-scale to small-scale. The new atmosphere at the tobacco auctions is captured in this piece by Al Jazeera.