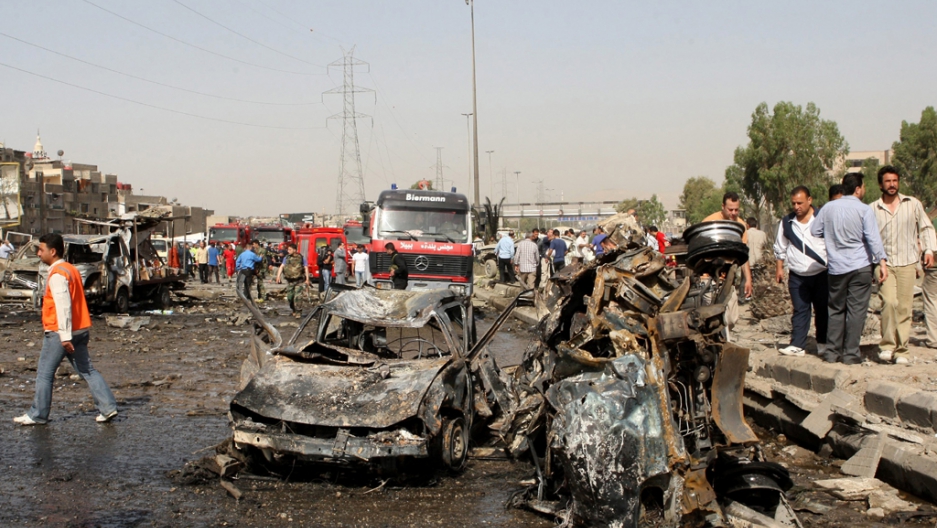 “Allah, Syria and only Bashar,” shouted the crowd of regime supporters who jostled a team of UN inspectors, led by Maj. Gen. Robert Mood. The inspectors arrived at the scene soon after the explosions, which took place in the Qazaz neighborhood, southwest of the capital.

The area is home to the headquarters of the Palestine Branch of Military Intelligence, one of Syria’s most feared detention centers, originally established to hold Palestinian fighters. It now imprisons Islamist militants, members of the banned Muslim Brotherhood and suspected Al Qaeda members, as well as opposition activists.

"Two booby-trapped cars loaded with more than 1,000 kilograms of explosives and driven by suicide bombers carried out the terrorist blasts," the Syrian Interior Ministry said in a statement. The two bombs went off about 60 meters from the gate of the Palestine Branch, blowing the facade off the building.

Students in a school opposite the prison suffered wounds from flying glass as the shockwave blew out their windows.

More from GlobalPost: Is Al Qaeda really to blame for Damascus bombings?

A GlobalPost reporter at the scene saw two large craters in the highway, dozens of scattered body parts and more than 50 charred and twisted wrecks of vehicles from what was the largest, deadliest bombing since the Syrian uprising began in March last year.

“Is this the freedom they want?” screamed members of the security forces, displaying pieces of dead bodies to the cameras of state-run Syria TV, the only broadcaster allowed to film the scene in the hours immediately following the blasts.

“Is this the freedom of Hamad and Abdullah?” they shouted, referring to Hamad Bin Khalifa al Thani, the emir of Qatar, and King Abdullah of Saudi Arabia. Both Gulf nations have openly backed the Syrian opposition and said they would send money and weapons to the armed rebels of the Free Syrian Army.

“This is not the Syria in which I was born and grew up. I was hearing about explosions in Iraq or Lebanon, but today I feel Syria is no more the country of stability and security,” said Basil, a 25-year-old from Qazaz who was waiting for a bus to take him to work when the explosions went off at around 7:50 a.m. Basil escaped serious injury after throwing himself onto the ground behind the cover of a parked car.

“I don’t know what to say except that it is a big crime to kill ordinary, innocent people with bombs.”

The US embassy in Beirut condemned the “indiscriminate targeting and killing of civilians,” which it said is “reprehensible and unacceptable in any context.” It also reiterated calls for the Assad regime to implement the ceasefire plan negotiated by UN-Arab League envoy Kofi Annan, which nominally came into force a month ago but was ignored by both regime and rebels from the first day.

In Damascus’ National Hospital, GlobalPost saw doctors overwhelmed by dozens of injured men, women and children, many in silent shock at what they had witnessed. A nurse said they had already filled eight bags with body parts and were appealing for blood donations to treat the wounded.

"It is not going to solve any problems," said Maj. Gen Mood, the UN inspector, when asked what his message was to those who are carrying out such attacks. "It is only going to create more suffering for women and children."

There was no claim of responsibility for the attack, which was the first to target Damascus on a working day. Several previous explosions apparently targeting security buildings or personnel since January have occurred on weekends, making casualty figures among civilians and officials fewer.

Two such previous attacks have been claimed online by a little-known group calling itself Al-Nusra Front, which some Western security analysts believe could be a front for Al Qaeda in Iraq. Al-Qaeda leader Ayman al-Zawahri called for Assad's downfall in February.

Speaking to GlobalPost a day before the attack, a recently defected colonel, who served with Airforce Defense and now commands rebel fighters in Homs, said the Free Syrian Army would never carry out suicide bombings.

As they have done in past attacks, Syrian opposition figures blamed the blast on the regime.

“The question to ask after such a crime is, ‘Who benefits?’ The answer is the Assad regime,” an opposition leader in Damascus told GlobalPost.

“From the first moment, the regime used the blast to attack Qatar, Saudi Arabia, America and the West. The message is the regime is fighting radical terrorists, not peaceful protesters.”

The opposition leader questioned why the blast should target Qazaz, a poor Sunni-majority neighbourhood that has seen repeated anti-regime protests. The last attack to hit the capital, on April 25, was an apparent suicide bombing that killed nine people following Friday prayers in Midan, a wealthy Sunni-majority neighborhood that has been a center of opposition to the regime.

A journalist for GlobalPost, whose name has been withheld for security reasons, reported this story from Damascus. Hugh Macleod contributed reporting from Beirut.