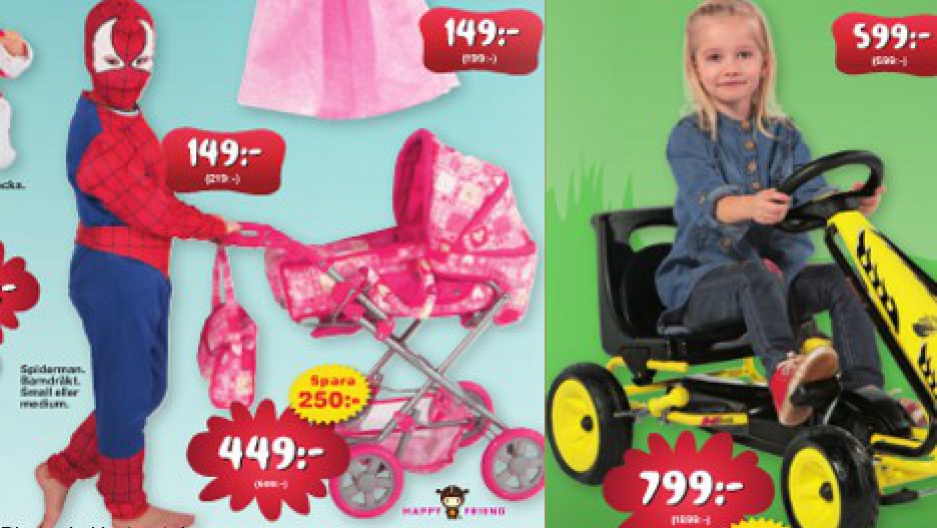 Why should boys have all the fun?
Credit: Leklust catalog
Share

A boy in a Spiderman outfit pushes a pink pram.

A young girl rides in a toy race car.

Those are just two pictures from a new toy catalog from "Leklust," a company with 17 toy stores in Sweden.

An image of gender-progressive toddlers might cause an outrage in most places in the world, but not so in Scandinavia.

Reporting from a region of the world where men routinely go on parental leave and where toddlers are encouraged to read a broad range of fairytales — including the one about the gay king — I was hardly surprised a Swedish store would “dare” to feature a male figure pushing a pram.

Even a pink pram.

"Gender roles are an outdated thing," the newspaper quotes Wiberg, the CEO, as saying. "I'm 71 years old, and those of us who have worked in this industry for a while know that boys play with doll houses. We know that boys can play with Barbie dolls.”

And in Sweden, they do. And no, they do not have a higher percentage of gay population. Just a highly educated and astutely aware population.

In 2009 sixth grade students from Växjö, in southern Sweden, gave a major headache to the toy retailing giant Toys "R" Us.

The 13-year-olds accused the company of gender discrimination, claiming a Christmas catalog featured children in "outdated gender roles," with boys too often in "action filled" pictures, and girls only in "passive poses."

I, personally, would buy a pink pram from my Spiderman son. If I had a son, that is. I just haven’t gotten around to making babies yet.

I'm far too busy driving my race car around.

What can I say?