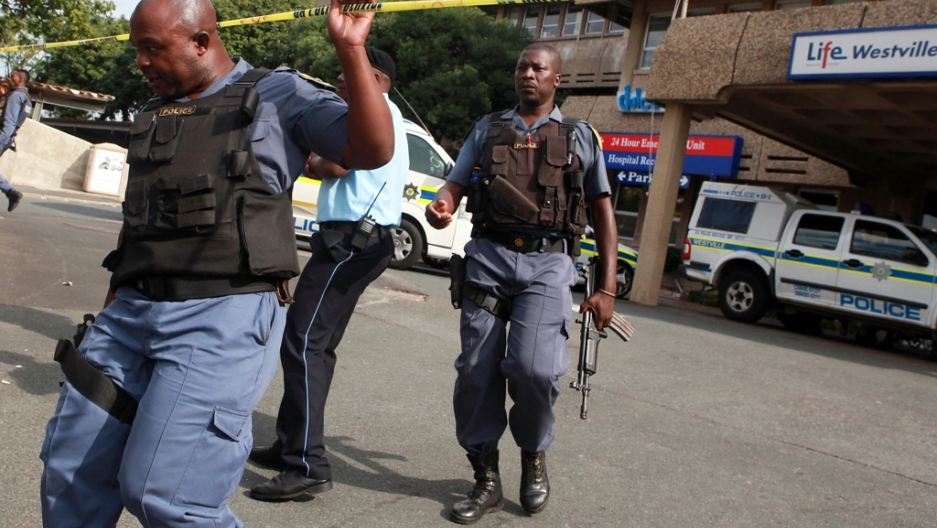 South African police cordon off the entrance of the Westville Hospital during a 5 hour hostage drama which unfolded in Durban on April 27, 2012. South Africa has a problem with corruption among its police.
Credit: Rajesh Jantilal
Share

JOHANNESBURG — South Africa’s war on crime has a new target: the police.

More than 630 police officers were arrested in South Africa’s Gauteng province in 2011, mainly on charges of fraud and corruption, but also for rape and murder, according to the latest statistics.

“It’s good news,” said Lieutenant-General Mzwandile Petros, police commissioner of Gauteng, the province that includes the cities of Johannesburg and Pretoria, in describing the arrests. “If there is one thing the people of this province are sick of, it’s corruption in the police,” he told reporters.

Petros may have meant to reassure the worried citizens of South Africa, but his comments also highlighted the scale of the problem.

There is growing frustration over this country’s corrupt and incompetent police at seemingly every level of the system, from traffic cops soliciting a bribe for a “cold drink” to the controversial appointments of some of the country’s highest-ranking police officials.

Mdluli has been "shifted" to another position, the police minister announced yesterday, although the reason cited was not the allegations of serious wrongdoing, but rather the claims made by Mdluli that senior officers were plotting against him.

“There is a growing sense of public outrage, and a strong feeling that corruption is increasing,” he said. “This is a widespread problem, across races, classes and income levels.”

One in four Johannesburg drivers claimed to have been asked for a bribe by traffic cops in 2010, according to the government’s Statistics South Africa. And some 50 percent of all Johannesburg metro police officers have been involved in bribery, according to a new Corruption Watch report. Few of these cases are ever reported.

Efforts to combat the problem have failed to gain much traction. A parliamentary committee is currently deliberating a bill to create a new anti-corruption unit, to comply with a court ruling that said the current anti-graft body is not sufficiently independent from political interference.

But civil-society groups fear the proposed new unit, still under the auspices of the police, will be no better unless it is fully independent.

Both domestic business and foreign investment will take a hit if South Africa continues to lack an independent anti-corruption agency, said Chandre Gould, a senior crime and justice researcher at the Institute for Security Studies.

She pointed to the country’s worsening scores on the annual Transparency International corruption perceptions index: South Africa dropped from 54th of 182 countries in 2010, to 64th this year.

But Gould also noted that in many cases, it is private companies and businesspeople that are paying the bribes, and so you can’t just blame the government.

“It takes two to tango,” she said.

Also eroding public trust in South Africa’s police are the mounting reports of police violence, including accusations that some officers are using torture to hunt down criminals.

Eight police officers are currently standing trial for the murder of Andries Tatane, a schoolteacher who was beaten to death while protesting last year near the town of Ficksburg. Last month four officers in Johannesburg were caught on a cell-phone video beating a street hawker, sparking more public outrage.

Meanwhile, a leaked internal police report has revealed that thousands of officers have been deemed “not competent or proficient” at using their service weapons.

Just one day after police commissioner Petros announced the arrests of more than 600 police officers, three more were arrested and charged with corruption, assault and fraud.

The story is disturbing, but typical: The officers are accused of detaining a man they claimed was urinating in public, brutally beating him, throwing him in jail and extorting money.

Mnisi urged police officers “to continue to work tirelessly in arresting criminals, including any tsotsi-cops out there," using a South African slang term for a low-level thug.

He added: “There is nothing as embarrassing as seeing those who are supposed to uphold the law actually being involved in criminality.”