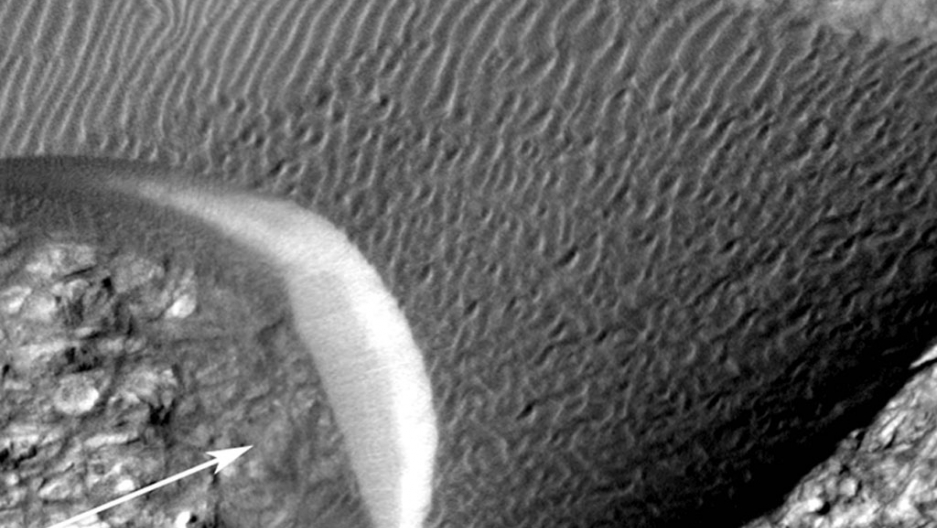 Images of shifting sand dunes on Mars prove they're speedier than once thought.
Credit: NASA/JPL-Caltech/Univ. of Arizona/JHU-APL
Share

New images from NASA of shifting sand dunes on Mars prove that they are speedier than once thought.

The new data contradict beliefs that the surface of Mars was static and unchanging.

According to Space, NASA's Mars Reconnaissance Orbiter compared high quality images to show the motion of the towering sand dunes on the red planet.

The images were taken over 105 days.

Read more on GlobalPost: Asteroid craters might hold key to life on Mars

"For many years, researchers have debated whether or not the sand dunes we see on Mars are fossil features related to past climate, since it was believed that the current atmosphere is too thin to produce winds that could move sand," said Jean-Philippe Avouac, a professor of geology at the California Instiute of Technology, who began the study, reported e! Science News.

"Our new data shows that wind activity is indeed a major agent of evolution of the landscape on Mars. This is important because it tells us something about the current state of Mars and how the planet is working today, geologically."

Researchers said the new information on the movement of sand on Mars could help with future missions to the planet.

The research will appear in the journal Nature.