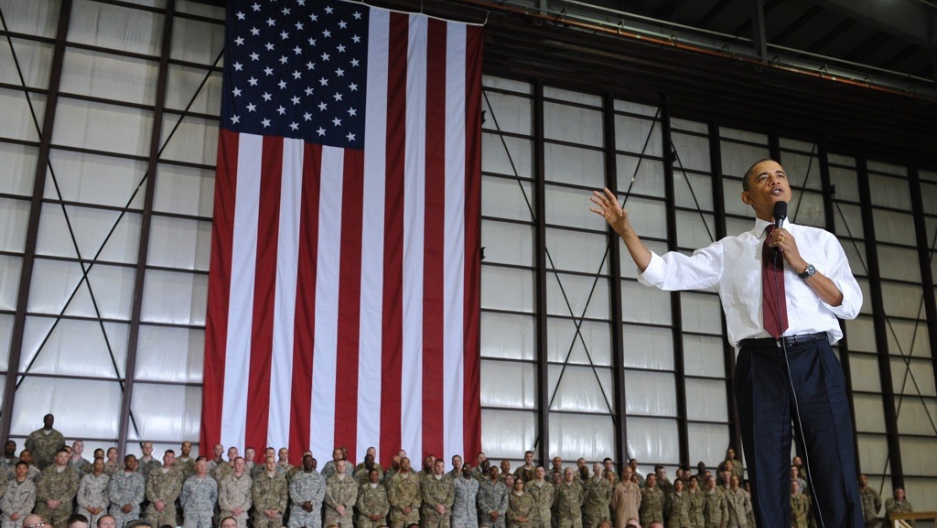 US President Barack Obama speaks to troops during a visit to Bagram Air Field on May 1, 2012 in Afghanistan. Obama signed an US-Afghanistan strategic partnership agreement during his unannounced visit to the country.
Credit: Mandel Ngan
Share

CAMBRIDGE, Mass. — President Barack Obama’s recent statements about a “new dawn” for Afghanistan, made in the middle of the Kabul night, were all too reminiscent of the “light at the end of the tunnel,” a phrase that came to symbolize all the over-optimism of America’s long involvement in Indochina.

The phrase was used by Gen. Henri Navarre in 1953, when he took command of French forces in Vietnam. By then the French had been fighting for seven years to re-establish colonial control. “Now we can see success clearly, like the light at the end of the tunnel,” the general said. Navarre hoped that a concentrated troop increase, a surge, that hit the Vietnamese rebels hard would turn the trick. But the following year the war was lost.

In 1964, US Gen. William Westmoreland assumed command of American forces that were about to take over where the French left off. He said the war had “turned the corner,” and that victory was in sight.

The optimism that Westmoreland exuded exacerbated the surprise and shock four years later, during the Tet holiday, when the Vietnamese communists hit so many targets at once. Suddenly it was clear that the tunnel was a lot longer than we had been told. Militarily, our opponents were beaten back, but politically and psychologically they won. President Lyndon Johnson soon declared he would not seek office again, and sued for peace.

Westmoreland asked for a big troop increase, a surge. But, as Shakespeare had Henry V say to his cousin, the Earl of Westmoreland, “I pray thee wish not one man more,” the modern Westmoreland was also turned down.

For Obama the surges are over now. Having been out-maneuvered by his generals once, he is not about to give them one man more. America is headed for the exits, but one fears that warrantless optimism may still cloud our vision.

“COIN,” for counter-insurgency, in which Gen. David Petraeus put so much store, has failed. Today the emphasis is on training the Afghan army to take the place of NATO forces. It is “our ticket out,” as military commanders say. When I last visited Kabul I pointed out that we had been training Afghan soldiers since 2002. Yes, I was told, but serious training only began in 2009. Why was that? I asked. Because, I was told, we had under-estimated the ability of the Taliban to fight.

There have been improvements in the Afghan army, but much of it is still too dominated by ethnic Tajiks, which means they are as foreign as Americans in southern and eastern Afghanistan where Pashtuns speak a different language than their northern countrymen. The Afghan National Army is prone to loot and rob civilians. Corruption at the leadership level is epic; aided and abetted by the Americans pouring billions into an economy too small to absorb it. No wonder the money goes out the back door in suitcases headed for Dubai banks.

Even more disturbing, fully 20 percent of the NATO combat deaths this year have come from our Afghan allies turning their guns on us, according to The New York Times.

In Afghanistan, as it was against the North Vietnamese, the doctrine is that if we just keep hitting the Taliban hard enough they will come to their senses and bend to our will. But neither the Vietnamese nor the Pashtuns are known for bending to the will of foreigners.

Yes, it was supposed to be more than that. We were supposed to protect the population, give them good government, win their hearts and minds, but somehow that never happened.

Today, whenever there is a spectacular attack in the heart of Kabul, the embassy portrays it as an act of desperation by an enemy that knows it is losing. One hopes the officials who say these things know it is just propaganda, but never under-estimate the power of self-deception.

One used to hear similar briefings in Saigon, briefings that never matched what was going on in the field. As Sebastian Junger wrote in “War,” his book about fighting in Afghanistan, it isn’t lying, exactly. It’s an invitation to join in a conspiracy of wishful thinking.