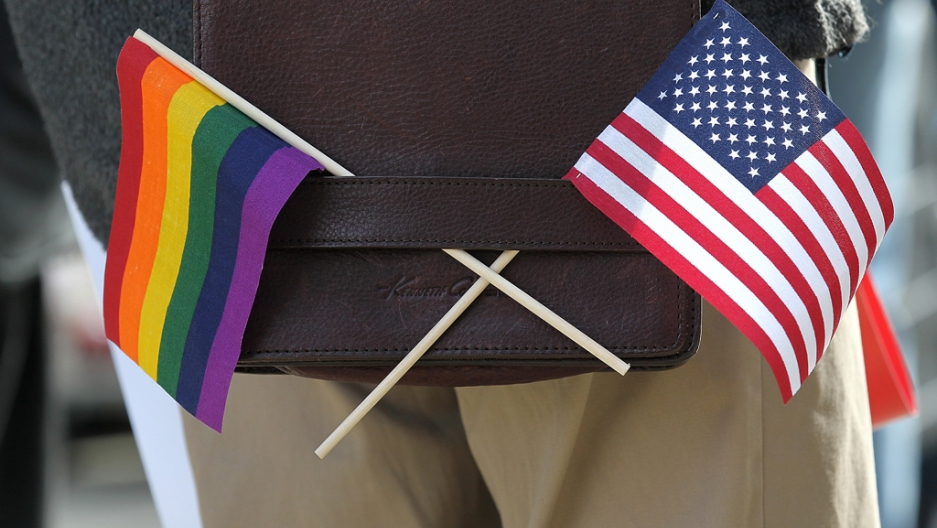 A gay pride and an American flag hang from a shoulder bag during a demonstration. Democrats are petitioning to move the DNC out of North Carolina in the wake of Amendment One, which bans same-sex marriage in the state.
Credit: Justin Sullivan
Share

The Democratic National Convention is scheduled to take place in Charlotte, North Carolina in September — but some Democrats angered by the state's passage of Amendment One want to move the convention elsewhere, the Charlotte Observer reported Thursday.

More from GlobalPost: Amendment One: How it changes North Carolina law

"On May 8th, the people of North Carolina voted in support of Amendment One, a constitutional amendment that discriminates against LGBT people, couples and their families," the petition reads. "In protest, the Democratic National Convention Committee should MOVE its convention to a state that upholds values of equality and liberty, and which treats ALL citizens equally."

Democratic Party chair Debbie Wasserman Schultz, a founding member of the Congressional LGBT Equality Caucus, said in a statement that passage of the amendment reaffirming North Carolina's ban of same-sex marriage was “very disappointing. It unfairly singles out gay and lesbian Americans and is discriminatory," the Observer reported.

More from GlobalPost: North Carolina amendment one: Obama is 'disappointed' with vote

However, DNC officials have said that despite the protests, they will not move from North Carolina.

"The convention is staying in Charlotte," Kristie Greco, the director of communications and public affairs for the Democratic National Convention Committee, told Politico on Wednesday.

Democrats will convene for their convention on September 3rd through the 7th, where they will re-nominate President Obama, who said he was disappointed in North Carolina's passage of Amendment One, which received about 61 percent of votes, the Christian Science Monitor reported.

North Carolina joins twenty-eight other states which have voter-approved constitutional bans on same-sex marriages, according to CSM.