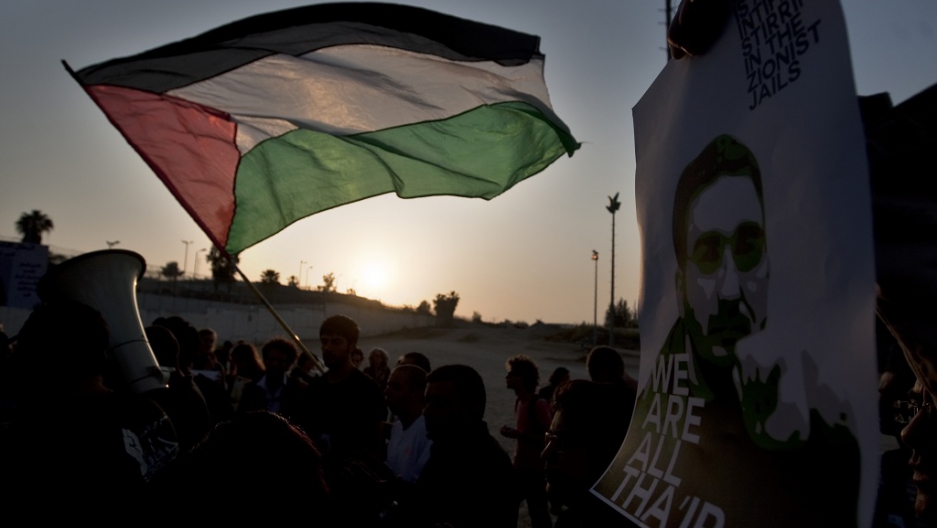 Palestinian and Arab Israeli protestors wave the Palestinian flag and hold a poster picturing Thaer Halahla, who has been on hunger strike for more than 64 days, during a demonstration in solidarity with Palestinian prisoners held in Israeli jails outside the Massiyahu Prison in Ramle, near Tel Aviv, on May 3, 2012 At least 1,550 imprisoned Palestinians are now taking part in a mass hunger strike, Israel's Prison Service said on May 2.
Credit: Ahmed Gharabli
Share

Anonymous turned the heat up on the United Nations in an attack on Wednesday after taking down the organization's official website, accusing them of “ignoring” the plight of several Palestinian hunger strikers who are protesting their detention without trial by Israel.

"The calls of the EU and the Red Cross — their demands to allow them to visit the families — are just a plot with the occupation," he told reporters this week.

“Since westerners and #UN seems to ignoring #PalHunger, may be #Anonymous has to do something about it? | #Free #Palestine #Gaza,” they added on Twitter.

Beginning in 2010, the collective has sought to remind its victims that not only are they opposed to violent crackdowns on protesters in Bahrain and Syria but also stand defiantly against Israel's treatment of Palestinians.

Earlier this year, Anonymous brought down the website belonging Combined Tactical Systems, an American weapons manufacturer known to have sold chemical, anti-riot munitions to the Israeli Defense Forces. Noting that the Combined Tactical Systems company flies Israeli flags outside of their offices, Anonymous also seeks to remind them that their munitions are used against Palestinians.

“…just two months ago your tear gas canisters fired by the IDF killed a man in the West Bank. Did you think we forgot? Why did you not expect us?” read a statement posted on pastebin.com, harkening to the collective’s mantra “we do not forgive, we do not forget, expects us.”