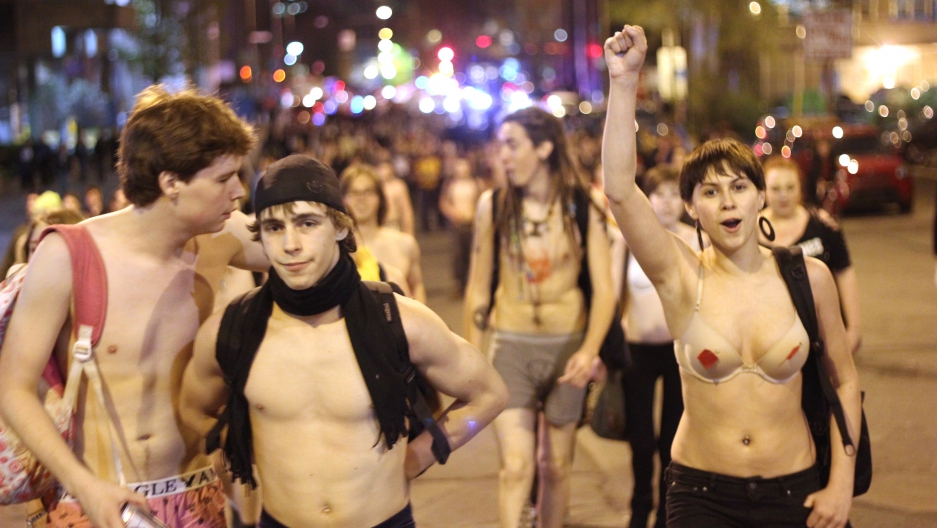 Nearly naked student protesters march against tuition hikes in Montreal on May 3, 2012. Thousands of students paraded in various states of undress through the streets of Montreal in opposition to tuition hikes.
Share

They rallied through the streets of Montreal in their underwear, some with breasts covered only in red body paint.

“We’re freezing our behind for free education,” read one protest sign, a reference to the day’s nippy weather. “The student body against the increase,” read another.

The protest has raged for three months. Striking students have blocked subways, roads, and even highways. Outside of the French-speaking province, media commentators have dismissed them as spoiled brats.

With an average tuition of $2,500 a year, Quebec university students already enjoy the lowest fees in Canada. The proposed annual increase of $254 for the next seven years won’t change that.

The discontent, more profoundly, is one of vision, and that’s where Harper comes in.

Harper has nothing to do with the tuition increase — in Canada, education is the responsibility of provincial governments. But the battle is indicative of a staunchly progressive vision in Quebec, one that regularly pits residents and their provincial government against the prime minister’s conservative agenda.

Harper celebrated his anniversary with a speech vaunting policies he said will “sustain the economy of tomorrow.” Many in Quebec beg to differ. They see an attempt to remake the country into an austere capitalist bastion, where the interests of Big Oil trump environmental concerns, where “tough on crime” means soft on gun control, and patriotism involves reverence to the British monarchy.

It’s a version of American Republicanism meeting the European welfare state. The difference is that in Canada, the clash involves a province the federal government estranges at the country’s peril — one that has already held two referendums on independence, the last one, in 1995, coming within a few thousand votes of making Quebec a separate country.

The warning signs are many, some coming from high-profile “federalists” — the term used for those who want to keep Canada united. The most noteworthy is Justin Trudeau, a federal politician from Quebec with the opposition Liberal Party. His father, the late Pierre Elliott Trudeau, was a long-time prime minister and stalwart in the battle for national unity.

“There is a way of viewing social responsibility, openness to others, a cultural pride here in Quebec that is necessary to Canada,” the younger Trudeau told the public broadcaster, Radio Canada. “And I always say that if I ever believed Canada was really the Canada of Stephen Harper and we were going against abortion and going against gay marriage, and we were going backward in 10,000 different ways, maybe I’d think of wanting to make Quebec a country.”

The statement made headlines across the country, largely due to Trudeau’s pedigree. He’s also touted as a potential future leader of the Liberal Party, which last ran the country from 1993 to 2006. That ended when Harper first gained power with a minority government.

More from GlobalPost: Where does Occupy Canada stand?

Separatist forces in Quebec sang hallelujah, while some federalists were shocked. In a later interview, Trudeau didn’t back down.

“The separatist option is not the bogeyman it used to be,” he said. “You ask me what the bogeyman is? It’s the one sitting in our prime minister’s chair right now.”

Quebec’s independence movement grew out of the so-called Quiet Revolution of the 1960s, a period when the province’s French-speaking majority shook off cultural domination of the Catholic Church and economic domination of the English-speaking minority. Since then, support for sovereignty has rarely dipped below 40 percent, and politics have been decidedly left of center. Two examples are government subsidized day care services for only $7 a day, and the lowest university tuition in Canada. (Last weekend, Quebec Premier Jean Charest offered to neutralize his proposed tuition hikes by reducing administrative fees an equivalent amount.)

Harper spent years wooing Quebec, recognizing that winning many of the province’s 75 seats in the federal House of Commons has historically been the ticket to majority government. He even passed a law describing Quebec as a “nation” within Canada.

For almost two decades, Quebecers sent left-wing separatists with the Bloc Quebecois to parliament. Then, in the May 2011 federal election they suddenly gave most of their seats to the federalist New Democratic Party, which has socialist roots. Conservatives won only six seats in Quebec, but formed a majority government by capturing Ontario and the Western provinces. And the clash of visions began.

Harper abolished the national registry for rifles — a database set up after a gunman killed 14 female students at the University of Montreal in 1989. Quebec strongly opposes the move and its government has gone to court for the right to use existing federal data to set up a provincial “long-gun” registry. The federal government wants the data destroyed.

Harper has also made development of the Alberta tar sands — massive deposits of mainly US-bound bitumen oil — his economic centerpiece. His government has dismissed concerns about greenhouse gases created by mining the “dirty oil,” and pulled Canada out of the Kyoto international treaty on global warming. Quebec responded with an Earth Day march last month that saw 250,000 people denounce such policies.

Needles to say, Harper’s fascination with the British monarchy — restoring the “royal” designation to Canada’s air force and navy, hanging the Queen’s portrait in federal buildings and celebrating her diamond jubilee — doesn’t go over well in Quebec. It’s a province where license plates read “je me souviens” (I remember) — a reference to England’s 1759 victory against France in a battlefield near Quebec City, which turned Quebec into an English colony.

The most bitter fight is over Harper’s new crime law, which imposes minimum mandatory sentences and gets tougher with young offenders. Quebec’s government, which prefers to stress rehabilitation and a more lenient approach to young offenders, has been scathing in its criticism.

“I don’t recognize myself in this Canada,” fumed Quebec’s justice minister, Jean-Marc Fournier, after a recent meeting with his federal counterpart.

Peter White, a key adviser to past Conservative prime ministers, warned Harper in a biting public letter that his neglect of the province will lead to the “de-Canadianization of Quebec” and possible independence. Michael Ignatieff, the former Liberal Party leader, told the BBC last week that differences in the political culture of Quebec and the rest of Canada will lead to “full independence.”

All this is music to the ears of Quebec separatists, already honing their arguments for a provincial election that could come this year. “Quebec no longer exists for Ottawa,” said Bernard Drainville, a key politician with the Parti Quebecois, which held two independence referendums when it was in power.

Harper’s majority government has only been in power one year. Already, many fear his greatest legacy may be the break up of the country.