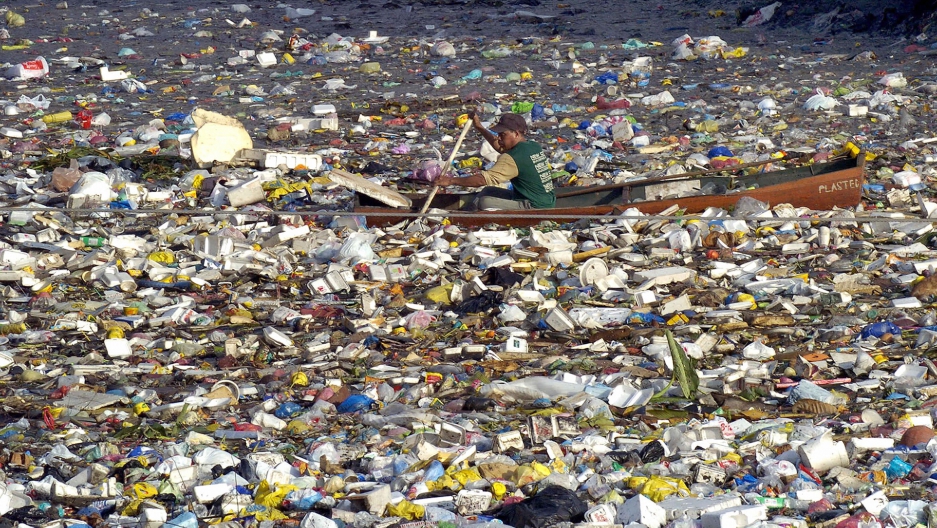 Hawaii has banned the use of plastic bags at grocery stores in an effort to help the environment. Here a scavenger in a dugout canoe paddles through a sea of garbage along a Manila waterway.
Credit: Jay Directo
Share

The plastic island known as "The Great Pacific Garbage Patch" has not only grown 100 fold in 40 years, it has also changed the way some marine life reproduce according to new research.

Scientists from Scripps Institution of Oceanography in San Diego traveled to the Texas-sized patch of plastic in the middle of the Pacific to study the effects of plastic pollution. According to NBC, they found insects called "sea skaters" or "water striders" were using the trash as a place to lay their eggs in greater numbers than before.

In their paper published in Royal Society journal Biology Letters, the researches noted the repercussions of this new reproduction technique could be far reaching for both sea skaters and their natural predators.

The Telegraph noted, "The insect, (sea skaters) which spends its entire life at sea, needs a hard surface on which to lay its eggs – previously limited to relatively rare items like floating wood, pumice and sea shells." Now it seems these insects are taking advantage of the plastic, laying their eggs on the trash humans threw away.

In the paper the team also noted nearly 10 percent of fish in the area had eaten plastic.

The plastic that bothered researchers most was micro-plastic. In a statement on their website the research group said, "During the voyage the researchers, who concentrated their studies a thousand miles west of California, documented an alarming amount of human-generated trash, mostly broken down bits of plastic the size of a fingernail floating across thousands of miles of open ocean."

According to The Telegraph, The United Nations Environment Program says around 13,000 pieces of plastic litter are found in every square kilometer of sea, but the problem is worst in the North Pacific, home to the garbage patch.

Scripps graduate student Miriam Goldstein told NBC, "Plastic only became widespread in late '40s and early '50s, but now everyone uses it and over a 40-year range we've seen a dramatic increase in ocean plastic. Historically we have not been very good at stopping plastic from getting into the ocean so hopefully in the future we can do better."

Visit msnbc.com for breaking news, world news, and news about the economy