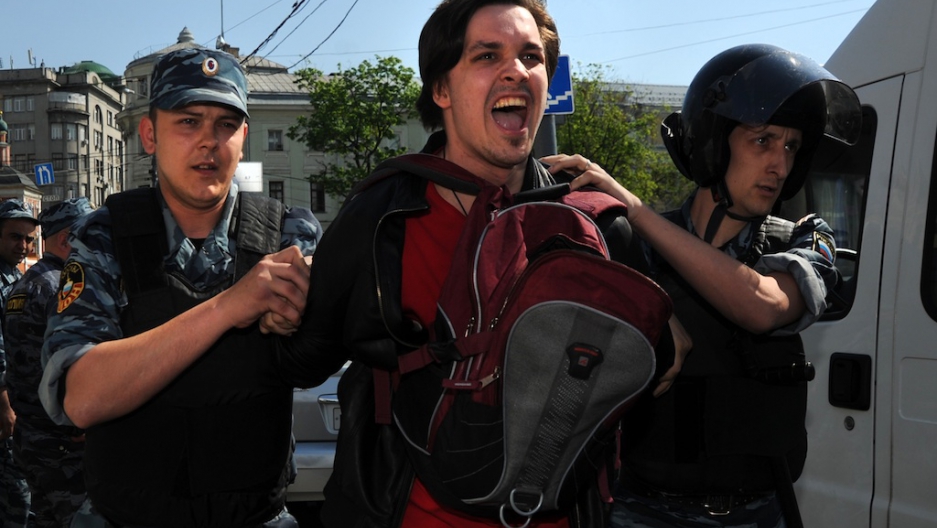 Russian riot policemen detain an opposition supporter during a rally in central Moscow on May 8, 2012. Over 400 people have been detained in the past 48 hours for protesting Dmitry Medvedev's candidacy as President Vladimir Putin's premier and Putin's reelection, after a British human rights report criticized Russia's record on freedom of assembly.
Credit: ANDREY SMIRNOV
Share

Russia and Britain found themselves at odds this week, after the UK's Foreign and Commonwealth office issued their 2011 Human Rights and Democracy report detailing numerous violations by Russia in the Caucasus, and on elections, women's rights, freedom of speech and freedom of expression. Russia rebuffed the report in response, saying that it was "not impartial and open minded," according to PressTV.

The report mentions 30 countries Britain feels are not living up to their human rights responsibilities, and slams Russia's record on living up to international agreements and the rule of law. The report even details which NGOs are supported by the UK to the tune of £1.25 million in fiscal year 2012.

"Britain's approach to assessing the real situation in the human rights sphere in our country is not impartial and open minded. The authenticity of the information and sources used raises serious doubts," said Konstantin Dolgov, the Russian foreign ministry's ombudsman for human rights.

"It should be a fair, constructive and mutually respectful conversation, free from stereotypes of confrontation and politicized morals," he added.

This is a particularly sensitive time for Russia, as Putin's re-election is seen by many as a large demonstration of corruption in the government (especially with the recent news of former president Medvedev becoming Prime Minister), and LGBT rights are at the forefront of not just the Foreign Office report, but the media as well.

The BBC reported last week that the first fine for illegal gay rights "propaganda" has been levied against St. Petersberg activist Nikolay Alexeyev, who was fined 5,000 rubles for holding a sign that read, "Homosexuality is not perverted."

The local law, which the Foreign Office report called "a concern" went into effect in November, despite international protests and firm condemnation from the European Court of Human Rights. Alexeyev had previously attempted to hold a gay pride march in Moscow, but was denied permission by Russian authorities. According to the Foreign Office report, the European Court had ruled that this was illegal discrimination, but Russia ignored the ruling.

Despite the fury emanating from the Kremlin, British Foreign Secretary William Hague said at the launch of the report, "Indeed our country is one of the most active in the world when it comes to promoting human rights, and this report is one of the most comprehensive that is produced by any Foreign Ministry in the world. We are proud of this record and of the stand we take on behalf of those whose rights are denied around the world."

For more on the global struggle for LGBT rights, check out GlobalPost's Special Report The Rainbow Struggle.