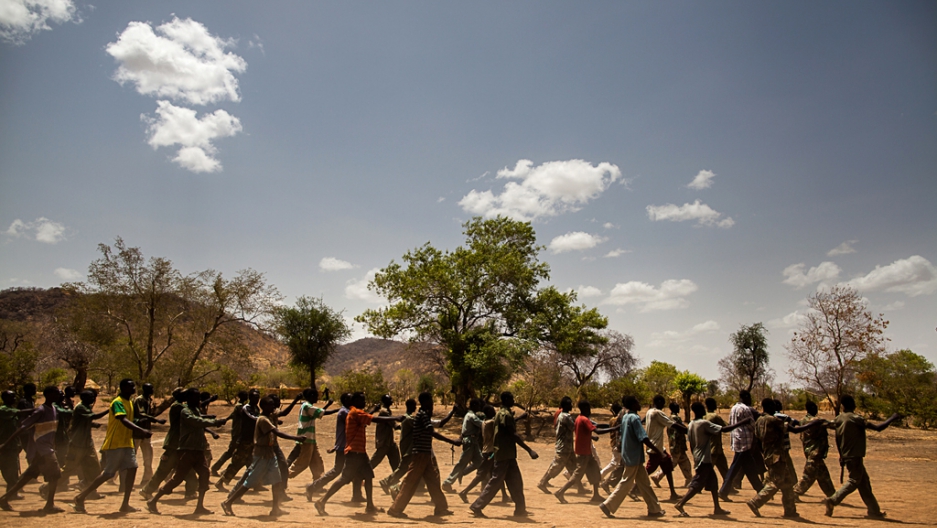 NUBA MOUNTAINS, Sudan — The war against Khartoum is political and ideological, but increasingly it looks as if it must be won or lost on the battlefield.

On a stretch of wooded savannah encircled by a natural amphitheater of hills, new recruits to the rebel army clutch sticks instead of guns as they practice drills. Among the spirited newcomers is 23-year-old Osman Hussein. “I am fighting for the rights of the Nuba people,” he says. “I am not afraid. Even if I die it will be fighting for my people and my land.”

Brigadier-General Mahana Bashir, the officer in charge of the SPLA-North camp, said 4,000 troops are currently in training, all volunteers. “We are fighting a just war defending our people, defending our land. This is why South Sudan has gone: They were forced to split from Sudan,” he says.

In late April, the fighting focused on the town of Talodi, South Kordofan’s colonial capital.

The commander of the attack on Talodi is Brigadier-General Kuku Jazz, a man famous in the Nuba Mountains for standing up to Khartoum by resisting an attempted disarmament of SPLA-North soldiers in the town of Kadugli last June, an event that helped trigger the resumption of war.

From his headquarters — little more than a radio set, some soldiers and a cache of looted weapons hidden among the hills — the general can stand on a rock and see the ridge across the plain separating his position from Talodi.

Overhead an Antonov bomber shimmers in the sky on its way to the town, its pulsing engines echoing across the land.

Jazz proudly displays this booty. “We will push them back with their own ammunition and their own guns,” he says, predicting the town would fall within days.

The SPLA-North has notched up a string of victories on the ground, and rebel commander Al-Hilu claims to control 90 percent of the countryside, although not the towns, in South Kordofan state. But in the air the Sudan Armed Forces is unchallenged and unhindered.

“The SPLA-North and Sudan Revolutionary Front have a real cause and much higher morale which gives them an advantage, at least on the ground,” says Jonah Leff, coordinator of the Sudan program at the Small Arms Survey which monitors the flow of weapons in the region.

Leff’s team has documented the SPLA-North’s possession of surface-to-air missiles. None have so far been used, raising questions about whether they are still functional and whether the rebels have the expertise to use them.

But despite its air superiority and greater size, Khartoum’s army is being stretched thin as it fights internal and external enemies on at least four different fronts — in the Nuba Mountains, Darfur, Blue Nile and along the border with South Sudan.

Residents of the Nuba Mountains say that when war briefly erupted between north and south over the disputed Heglig oil field last month the bombing here stopped for a few days suggesting that Sudan struggles to fight all its wars simultaneously.

“The SAF is stretched, economically more than anything else,” says Leff referring to the January oil shutdown that is strangling the economies of both Khartoum and Juba. “Bombing missions are not cheap,” he adds.

But they are continuing.

On the final day of our visit to Nuba Mountain war zone, while sitting in a small restaurant sharing a bowl of pasta and some fresh-baked bread, two earth-shaking bangs suddenly erupt. At the second, everyone dives to the dirt floor, spilling cups of scalding tea and plates of food and knocking over a charcoal stove.

“Stay inside! Stay down!” screams our translator, his eyes wide with fear, as the jet roared overhead. One spindly young girl — known by her nickname ‘TomAndJerry’ — is serving coffee when the bombs explode. She races out of the grass-walled restaurant, ripping a hole in the wall and diving into a foxhole dug out the back.

The attack is over in seconds, and nervous laughter quickly replaces the very real terror that the low-flying jet and its falling bombs had triggered.

The bombs have struck a nearby hillside, sending heavy chunks of twisted shrapnel cartwheeling through the air. At the bomb site, a home of sticks and grass smolder, shards of hot metal litter the ground, a tree is split and charred, and a bush fire burns on the hillside. This time no one was killed.