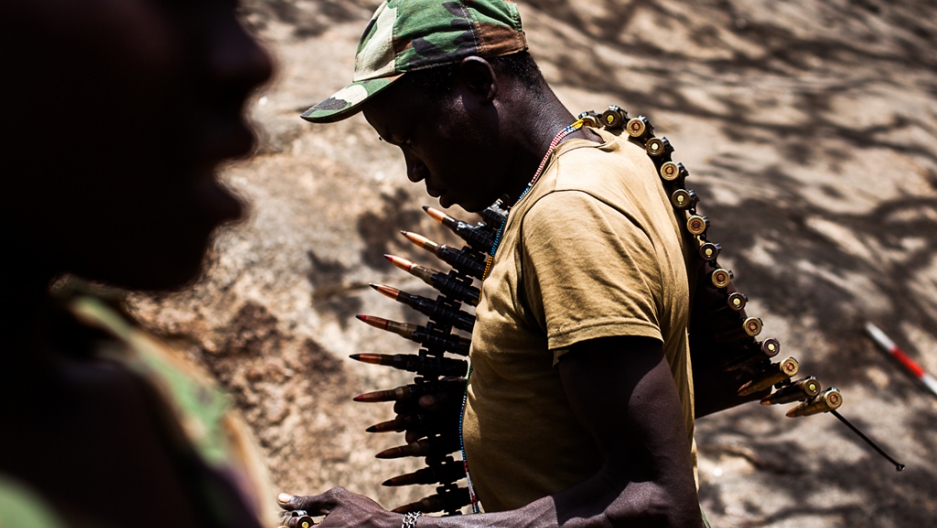 Rebel fighters of the SPLA-North prepare for an attack on a garrison of the Sudan army in Talodi. The rebels say they have armed themselves with weapons they captured from the army in previous battles.
Credit: Trevor Snapp/Pulitzer Center for Crisis Reporting
Share

NUBA MOUNTAINS, South Sudan — We were smuggled into South Kordofan, the province in Sudan in which the Nuba Mountains lie, by rebels from the Sudan People’s Liberation Army-North (SPLA-North).

The people here fought alongside southern rebels (the SPLA) during a 22-year civil war that ended in 2005. SPLA leader John Garang had a vision of a reformed but unified Sudan in which all tribes and religions would get along together.

But when Garang died in a helicopter crash in July 2005, just months after signing the Comprehensive Peace Agreement, his dream died with him: Last year South Sudan finally broke away to become the world’s newest nation.

As southern independence loomed, Sudan’s President Omar al-Bashir resolved to crush all remaining internal opposition. A June election in South Kordofan state was rigged in favor of Ahmed Haroun, a Bashir loyalist who, like his boss, is wanted by the International Criminal Court for alleged war crimes committed in Darfur.

In the days after the election, an attempt to disarm Nuban soldiers in South Kordofan’s provincial capital Kadugli was met with resistance. The SPLA-North took up arms again, and Khartoum’s bombers began their daily attacks from the El Obeid airbase to the north.

Sudan and South Sudan are still fighting, sometimes diplomatically, sometimes militarily. Most recently they battled over the Heglig oil field. The disputes hinge on the demarcation of their shared border, the splitting of oil revenues and the citizenship of those marooned on the wrong sides of the frontier.

The South may now be another country, but in the Nuba Mountains and in other rebellious parts of Sudan, such as Darfur to the west and Blue Nile to the east, Garang’s dream of a new Sudan is still alive.

We drove for hours in the back of a camouflaged pick-up truck through acacia forests, charred black by bush fires, across plains speckled with stony outcrops and eventually into a vast area of savannah and rocky hills that burns hot in the dry season and turns to lush green with the rains.

The only other vehicles on the dirt track were a couple of machine-gun mounted Land Cruisers with roofs sawn off, some SPLA-North pick-ups, a few 4x4s smeared with mud to conceal them from the bombers overhead, and a couple of trucks that looked like they had been salvaged from a scrap heap.

In one small town children played on a destroyed tank, swinging from its barrel, as the sun set behind them.

Dawn in South Kordofan starts off normally enough: Cocks crow, people’s sleepy chatter gets louder and more animated, children cry. Neighbors amble by greeting each other in the Nuba way, clapping a right hand to their friend’s left shoulder then shaking hands.

But the normality is soon shattered by the low throbbing buzz of a passing Antonov. People stop what they are doing, hunch their shoulders, stare up at the sky or run for the foxholes that are, as a matter of course now, dug in villages and next to houses.

It was mid-morning and the heat was already soaring towards 113 Fahrenheit (45°C) when the general agreed to see us.

Since his rebellion began last June, Abdulaziz Adam Al-Hilu has been a wanted man and keeps his bases temporary and well protected. He is happy to give interviews but few journalists make it into his territory in Sudan and fewer still are lucky enough to find him when they are there.

We walked across a field of yellowed grass so dry it cracked and crackled underfoot. At the bottom of a rocky hillside a narrow path snaked upwards towards a clearing framed by towering boulders.

It was like being in the nave of a roofless cathedral or, for Al-Hilu, a fortified bunker. “This small hill is equivalent to 50 tanks,” he said.

It has to be, because on paper the Sudan Armed Forces (SAF) is a formidable enemy with more soldiers, mechanized divisions and an air force. In contrast, the rebels have weapons and vehicles pilfered from retreating SAF forces although some groups, such as the Geneva-based think tank the Small Arms Survey, say they get covert assistance from South Sudan’s government.

Nevertheless, Al-Hilu, who was partly educated in the US and has fought Bashir for much of his life, appears relaxed. He eases into a metal chair as shooter- sized glasses of tea are poured and sugar is passed around. He is a thickset 57-year-old with pock marked cheeks, a stubbly scalp and a graying mustache.

He lacks the usual signifiers of the African leader — chunky watch, gold rings, multiple cell phones — and is instead modestly dressed in plain green fatigues. He has the air of a university professor, not a rebel leader intent on overthrowing the Khartoum government.

But that is exactly what Al-Hilu plans to do. His SPLA-North in the Nuba Mountains has joined forces with another rebel group led by Malik Agar in Blue Nile state as well as with Darfuri rebels of the Justice and Equality Movement and the Sudan Liberation Army. Together the rebels launched the Sudan Revolutionary Front (SRF) in November, and named Al-Hilu its military commander.

Their target is not secession or independence but the ousting of Bashir and his ruling National Congress Party in Khartoum. They want to remake Sudan putting an end to the decades of Arab hegemony and Islamic rule.

“We are working for regime change and a new constitution of liberal values, of justice, equality, individual rights and freedoms,” said Al-Hilu.

“Khartoum’s problem is they do not want recognize the diversity in this country. They want a monolithic state based on Islamism and Arabism,” he said.

Al-Hilu is Muslim but his Nuban fighters are a hodgepodge of Muslims, Christians, atheists and those with traditional African beliefs. Nuban families are similarly mixed. Such relaxed attitudes and tolerance run counter to Khartoum’s rigid ideology and challenge it.

The challenge is also, and increasingly, military. The SRF has the potential to become Bashir’s most serious armed threat, if — and it’s a big if in the fractured context of Sudan’s opposition forces — they can work and fight together. This, says Al-Hilu, is his ambition.

“We are at the phase of coordination rather than joint operations,” he says, then adds: “That will come soon.”