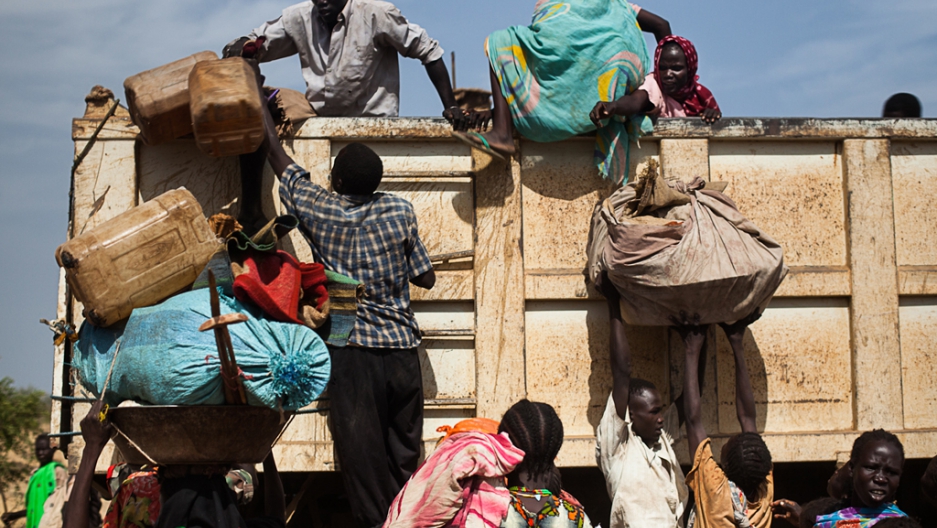 Nubans pile onto the back of a truck heading towards Yida refugee camp in South Sudan. The numbers of Sudanese arriving at Yida is dramtically increasing each week, according to medics working at the camp.
Credit: Trevor Snapp/Pulitzer Center for Crisis Reporting
Share

YIDA, South Sudan — One night, driving in a pick-up on a road that was no more than tire tracks through the thick sand, we stopped for some hitchhikers: one was a rebel soldier, eight others civilians, one slumping heavily against a wooden crutch.

Later we passed a truck that rattled and shook, belching dark smoke and the stink of burned engine oil into the black night and pulled over among the acacia trees. It was rammed full of refugees.

Hours later as we crossed the border into South Sudan, the people crammed alongside us in the back of our pick-up also became refugees, the newest arrivals in Yida which over the last year has turned from a nowhere hamlet into a town of 23,000.

As Sudan’s crisis in the Nuba Mountains continues, aid workers in Yida are expecting numbers to swell by thousands every week.

Yida is a case study in how a refugee city begins: with plastic sheeting, USAID-branded 4-liter tins of vegetable oil, plastic jerry cans lined up at boreholes and around it all an expanding moonscape as new arrivals chop down trees and cut grass to build their homes.

In a shack that marks the entry to Yida, the United Nations refugee agency is registering well over 300 new arrivals every day. Children are weighed and measured for signs of malnutrition, then are given three packets of fortified biscuits. Adults get five.

The sickest children are taken to a medical center run by Samaritan’s Purse, an American evangelical charity. It is one of just three aid agencies based in Yida with Doctors Without Borders and the International Rescue Committee.

Kuku Alabino, a medic specializing in nutrition, said the biggest risk is that malnourished young children will contract malaria or diarrhea, exhausting their already weakened bodies.

Two-year-old Ashia, from the village of Tess — a three- to six-day walk north of the border — is suffering from severe acute malnutrition, malaria and diarrhea that have left her skeletal, with her skin sagging and collarbones protruding.

Ashia has a feeding tube that runs into her nose, and bandages on her tiny hands to stop her tearing it out. Despite her dire appearance, Ashia will recover quickly now that she is receiving medical care, says Alabino. The treatment offered at Yida is simply not available in the Nuba Mountains, where aid agencies are banned by orders of President Omar al-Bashir’s regime in Khartoum.

“We are facing a humanitarian crisis in the Nuba Mountains,” said Hussein Madra, the Yida camp chairman who acts as a spokesman for the refugees. “Food stores are empty and [non-governmental organizations] are prevented from entering. Khartoum is using food as a weapon against us.”

Standing in line outside the registration center, Kafe Kurwa Said, a recent arrival from Buram, close to Tess, told a story typical of the new refugees.

“It was a very bad situation at my home. There is hunger, no food at all, the boreholes were broken by the [northern army],” said Kurwa, referring to the wells the villagers depend on for clean drinking water. “I have eaten just wild fruits since February. It is getting worse and worse: Antonovs are bombing every day. There is nothing to eat.”

The refugees in Yida camp and those still living in the Nuba Mountains blame Bashir and Khartoum for reigniting the war, but Madra spared some of his anger for the international community, too.

“The world is slow at making decisions. They know about the situation … they must wake up and assist us, we are being ignored,” he said.

There is almost no outside presence across the border in Sudan’s Nuba Mountains, no peacekeepers, no World Food Program, no UN. A handful of brave and tough foreigners are sneaking food in and refugees out, or manning and resupplying medical facilities, but for the most part the Nuba people are on their own.

When his aid agency pulled out last year, Ryan Boyette, a 31-year-old from Florida, quit and stayed. He has lived and worked in the Nuba Mountains for nine years and speaks the local language. His wife is Nuban, and their home is deep in the mountains.

Since the outbreak of war, Boyette has worked as a human rights monitor. This month he plans to launch a new citizen reporting website (www.NubaReports.org) using material gathered by him and four Nuban colleagues. The bombings and the fighting worry him, but not as much as the hunger.

“Since June there has been no harvest and no food coming into Nuba. Now the food is completely gone. Women and children are starving,” he said in an interview at a stall selling spicy coffee beneath a shady tree.

Boyette believes the world has failed — and continues to fail — the Nuba people who are being bombed and starved by their own government. Diplomats wring their hands and do nothing to either stop the attacks or feed the starving. “This is not a natural disaster,” he said.