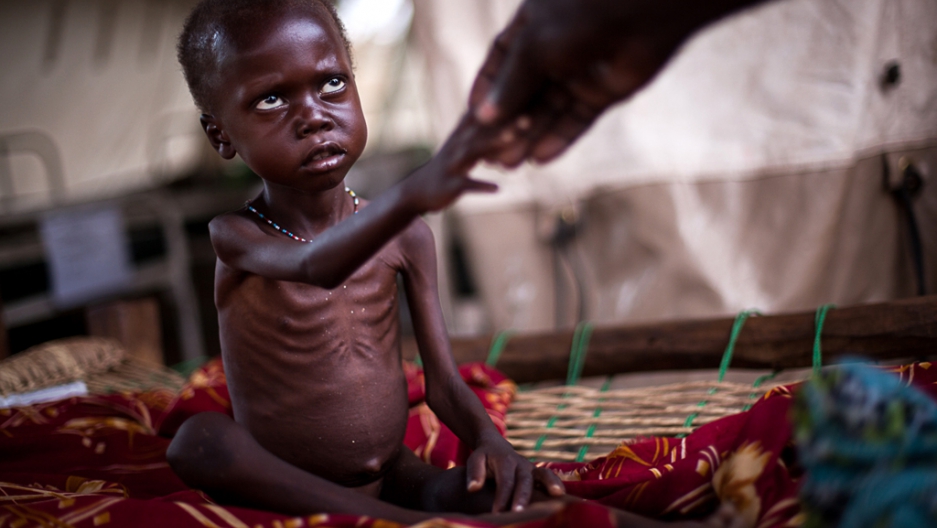 NUBA MOUNTAINS, Sudan — From the place on a hilltop that Ibrahim Nahar now calls home there is a commanding view of the tree-dotted savannah stretching into the distance and of the skies above. Every few minutes his eyes dart upwards, warily searching for the ghostly shimmer of an aircraft.

Next to his rough wooden bed beneath a makeshift grass-roofed shelter a solitary pig, a few goats and a skinny chicken take turns scratching in the dirt for scraps. Tangles of clothes hang from the rafters, and nearby some of his dozen children peek out from the dark gaps and caves between huge boulders.

In his cracked and weathered hands Nahar cradles an AK-47, its stock worn smooth over the years, but it is of no use against the airplanes he fears.

Since June, daily sorties by bombers and jet fighters have rained down fire and death on the people of the Nuba Mountains, forcing Nahar and thousands of others to leave their homes for the rocky hills, where countless crevices and caves offer some protection from the bombings.

The people of South Kordofan, the Sudan province where the Nuba Mountains are located, fought alongside southern rebels during a 22-year civil war and are now, once again, battling for their survival against the regime of Sudan President Omar al-Bashir.

“I am scared of the Antonov [bombers], of the MiGs and the artillery shelling, of the long-range missiles, of the random bombardments that come at any time,” said Nahar.

He is the town chief and, although his people now live in caves instead of houses, he offers to guide me around. He slings his rifle over a bony shoulder and sets off at a brisk pace, his long legs expert at navigating the paths and boulders that cover the slopes of this hill, known as Jebel Elasar.

Deep inside one cave lives Sadia Sabara and her five children. As we talk the whirring drone of an Antonov can suddenly be heard. Sudanese soldiers simply roll bombs out of the cargo chute turning the transport planes into amateurish but deadly bombers.

The attacks are inaccurate, but have nevertheless killed hundreds, maimed hundreds more and struck a deathly fear into everyone else. Inside the cave — a cramped and jagged gap between and beneath the huge boulders — voices fall silent, children press their skinny bodies up against a rock, movement stops, breathing is shallow, eyes are wide.

This time no bombs fall, but the fear the plane alone elicits is palpable. “I am so scared when I hear the Antonov,” says Sabara afterwards.

“Only God can stop the Antonovs,” Nahar tells her in an attempt at reassurance. “You have to pray.”

Amina Jaber, who lives in a nearby cave with her eight children, has not harvested any crops in almost a year. “I have a farm,” she says, her arm waving vaguely toward the savannah below. “But I am scared of the Antonov bombs so I have not planted.”

Fear of bombing means that people in the Nuba Mountains have already missed one harvest and now, as the planting season begins this month, they are set to miss another. The starvation that will inevitably follow will be catastrophic and is already biting.

“The hunger is the main problem here,” says Nahar. Asked what he was feeding his family, Nahar picked the cauldron off a cooking fire and lifted the lid. Inside was a stew of tree leaves plucked from the lalob tree. Nothing else.

“We used to eat the seeds of the tree but now they are finished, there are only leaves left,” he says.

Tess, Nahar’s town, was home to more than 9,000 before it was razed by fighting in January. Already, close to 4,000 have left for Yida, a fast growing refugee camp across the border in South Sudan. Those who remain will not hold out much longer. “If there is no food coming in the next few days then everyone must leave,” he warns.

Tess is just one small part of a growing crisis that may come to affect more than 1 million people in this mountainous area of Sudan. Already 300,000 have been forced from their homes, and nearly one tenth of these have crossed the border into the south becoming refugees. Many more are expected to follow.

The war in the Nuba Mountains is just the most recent iteration of Sudan’s fundamental problem of the center versus the peripheries. From his base in Khartoum, Bashir is intent on continuing attacks on the marginalized people who live on Sudan’s edges. In Darfur, conflict has raged for nearly a decade and has been branded a genocide by the US.

“The crisis in the Nuba Mountains is already the next Darfur,” says John Prendergast, co-founder of the Washington-based Enough Project campaign group. “For the last year, the Khartoum regime has relentlessly attacked civilian populations throughout the region. The tactics are the same in both places: aerial bombardment, attacks on villages, ethnic militias, starvation as a weapon.”

There will not be any food for the residents of Tess nor for any other of the afflicted communities because Bashir has rejected calls to open “humanitarian corridors” into the Nuba Mountains that would allow aid agencies to deliver truckloads of emergency food before the rains begin in the coming weeks, cutting off all access until October.

For months families have scraped by but in recent weeks they have been forced to supplement their diet of leaves with sorghum and maize seeds from their meager stores. Because they have eaten their seeds, they now have nothing to plant in the soil.

“The situation here is very tough, we have never experienced anything like this before,” says Nahar.

At another town dispersing into the hills, Amouna Thio was at her old homestead packing up for the long trek to Yida. Her few possessions were stacked outside a pair of mud and thatch huts and an empty grain store.

It takes a fit, strong person three days to walk to Yida but for Thio the journey will be much longer: She is heavily pregnant and has five small children but she said she has no choice.

“The children are hungry and we have no food left,” she said simply. “We are hard workers but because of the bombing we could not plant and now we are starving. I’ve heard that in Yida there is food.”

More from GlobalPost: Thousands flee to a new refugee camp in South Sudan