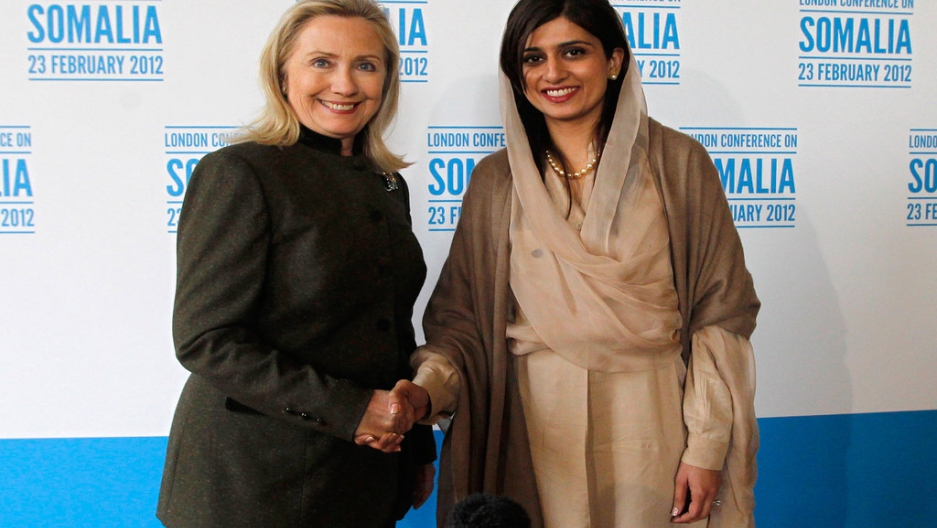 US Secretary of State Hillary Clinton (L) poses for pictures with Pakistan's Foreign Minister Hina Rabbani Khar during the Conference on Somalia at Lancaster House in London on February 23, 2012.
Credit: Jason Reed
Share

It was a unique Christmas party. Eight madrassah students in Peshawar, Pakistan took giant homemade cards, cake and flowers over to the US Consulate last year. The students and diplomats sat and talked for four hours, facilitated by teachers who provide English language and computer skills to the Islamic schools.

“This is the first time that these boys are connecting to and being exposed to a world outside the madrassah,” said Sameena Imtiaz, executive director of Peace Education and Development (PEAD), a non-profit foundation in Pakistan that has been working with madrassahs since 2005. “It wasn’t easy to build this relationship. It has taken a long time for them to trust us.”

It was a small step towards bridging what seems to be an ever-growing divide in the polarised post-9/11 world, where bomb blasts and security advisories have drastically reduced people-to-people contact between Americans and Pakistanis — opening a rift extremists can exploit.

“While learning skills, the students also learn about world religions, human rights, democracy, all new concepts for them,” added Imtiaz, a tall woman with a calm demeanor. PEAD currently reaches 100 students between 14 and 18 years old, at four schools.

The Christmas get-together, set in motion when some students said they wanted to celebrate Christmas “with foreigners,” was an unexpected outcome of the English Access Micro Scholarship Program launched by US State Department in collaboration with PEAD. It indicates the potential of “soft power,” a foreign policy concept based on the ability to attract and persuade, rather than use force and coercion, outlined by Harvard University professor Joseph Nye.

“The local church couldn’t accommodate us at such short notice due to their own programs,” Imtiaz said. “So we asked the US Consulate and they agreed. The boys were so excited. They made Christmas cards, and decorated them with ribbons and dried flowers, all on their own — they have no arts or crafts background or training. They even bought a cake and flowers — all with their own money, their initiative. They were so curious and interested, asked all kinds of questions, even some very personal ones, but the Consulate folks were very patient.”

Imtiaz is among the many Pakistani women who have long been working in their own ways to counter extremism. In April 2011, twenty such women came together in the Amn-o-Nisa (‘peace and women’) coalition, coordinated by Mosarrat Qadeem, a university professor-turned-activist.

Qadeem’s soft-spoken demeanour disguises an iron will. She has since 2007 been involved in peace trainings in Peshawar, de-radicalising youth — and their mothers. The young men she was working with would return to their villages in Pakistan’s northern areas neighboring Afghanistan, then “come back and tell us about the problems there, boys being taken by the Taliban. So I said, ‘Okay, I’ll go back with you.’ I went and stayed at their homes, talked to their mothers,” she explained.

“Mothers are the first ones to notice change in their children’s behavior. But many women are uneducated and lack control. There is a lack of resources, opportunity, education, and there’s been so much outside interference. We need to understand the difficulties these people face. There are mercenaries too, but most of these people are our own kith and kin. If we can have dialogue with the enemy, why not with our own people?”

These women have been working for years to uphold human rights, especially women’s rights that are the first to be threatened by rising extremism. Strategies like engaging with ‘the other’ and bridging divides through dialogue highlight the unique role that women can play in such situations. It’s no coincidence that the most ardent proponent of reconciliation in Pakistan was a woman, who paid for her politics with her life — former Prime Minister Benazir Bhutto, killed in 2008 while returning from an election campaign.

Shehnaz Akbar, a diminutive, curly-haired local politician in southern Punjab, has shown how dialogue can avert violence. A couple of years ago, when tensions ran high between the Shia and the Sunni populations in her district Rajanpur, she initiated dialogue with leaders of both communities. The team of men and women she put together “got the Shias to compromise on passing by the mosque silently during prayer time, because after all, the prayer time is the same more or less for everyone,” she explains. “And we got the Sunnis to agree to allow the Shia procession to pass by peacefully.”

The intervention diffused tensions and prevented violence from flaring up. Other districts hope to replicate this model.

A dozen Amn-o-Nisa members are now in the US through a community outreach program of the US Embassy in Islamabad. Their three-week trip includes a week in Washington, DC where they met with policymakers and two weeks in other cities — New York, Chicago, San Diego and Los Angeles — where they are meeting activists to share best practices and experiences.

House Democratic Leader Nancy Pelosi emphasized the importance of Pakistan’s security when she met them, a concern linked to America’s security and, indeed, the world’s.

Secretary of State Hillary Clinton surprised the Pakistani women by asking to see them, and squeezed in nearly 15 minutes for them last Friday. As the women lined up for a photo with Clinton, she sprung another surprise by suddenly stepping out of the line and talking to her “Amn-o-Nisa sisters.”

“She is a huge supporter of women, from the rights perspective as well as trying to make women more visible in the peace and security agenda,” says Sameena Imtiaz. “So it meant a lot to us.”

Amn-o-Nisa’s recommendations for the US government focus on advancing women’s inclusion in US counterterrorism efforts and increasing US engagement with Pakistani women peace-builders.

“The society is often painted as patriarchal and under the influence of radical Muslim clerics who see no place for women’s participation in the public sphere. However, a group of Pakistani women from different walks of life … are challenging this perception through bold efforts in their country to counteract radicalization among young men,” says a report by Meridian, one of the co-sponsors of their visit.

Pakistani women have been at the forefront of the struggle for democracy in a country that the military has ruled, directly or indirectly, for most of its 63 years, supported by external powers including the US. Now, several firsts indicate an ongoing process of change and some paradigm shifts. Pakistan’s first elected government after over a decade of military rule looks set to complete its tenure and hand over power to the next elected government — which will be a first in the country’s history.

Washington has acknowledged its foreign policy mistakes of the past with regards to Pakistan — President Obama and Secretary Clinton have apologized for them. And the US is actively supporting the democratic political process in Pakistan, increasingly dealing with the elected civilian government and civil society rather than the military.

The Amn-o-Nisa visit is “helping shift the US narrative on Pakistan, and particularly, the role women can play as change agents in the country,” observes Allison Shean, senior training specialist and program officer at The Institute for Inclusive Security. “Throughout their time in DC, the delegates offered concrete solutions for how the United States can better engage on the ground in Pakistan. Policymakers were responsive to their requests and appreciated hearing perspectives that are often left out of debates on US foreign policy.”

When policy makers and journalists at home and abroad acknowledge such voices, it strengthens democracy and human rights. In the long run, this is what will roll back the tide of extremism, making the world a safer place. Soft power. Woman power.