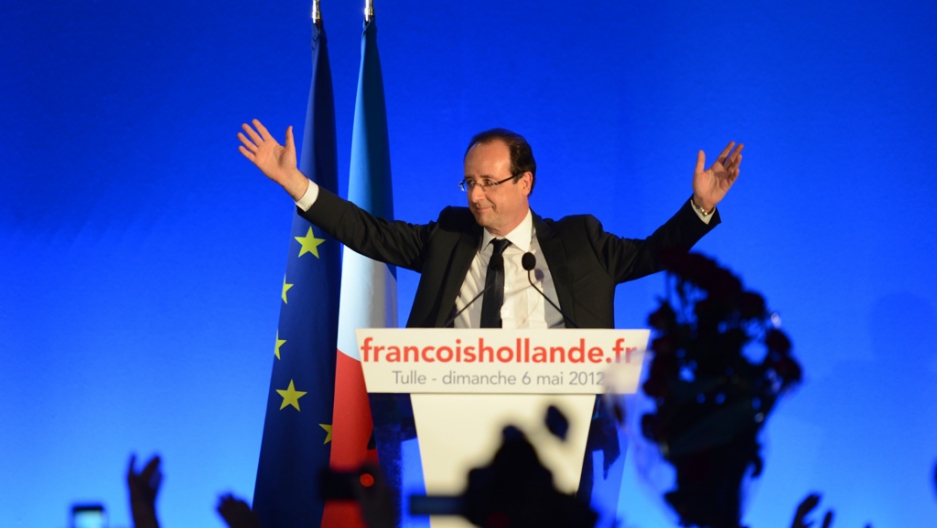 Francois Hollande waves as he arrives on stage to give a victory speech after the results of the second round of the presidential election on May 6, 2012 in Tulle, southwestern France. Hollande was elected France's first Socialist president in nearly two decades today, dealing a humiliating defeat to incumbent Nicolas Sarkozy and shaking up European politics.
Credit: Philippe Desmazes
Share

PARIS, France —  François Hollande will bring with him more questions than answers when he is inaugurated later this month.

A virtual unknown on the global stage, Hollande is emerging from a campaign where the main plank of his platform seemed to be “I am not Nicolas Sarkozy,” the outgoing president.

French voters gave the Socialist Party candidate the reins to the second-largest country in the European Union, with the world’s fifth-largest economy, by a 51 percent to 49 percent margin over incumbent Sarkozy, according to the French Interior Ministry.

“'France chose change when they elected me president," said Hollande after Sarkozy conceded defeat to a wildly cheering crowd in his home district of Tulle.

Hollande narrowly won the first-round poll on April 22 and has been the favorite in polls throughout the campaign. But investors and politicians around the world have been speculating about what his slogan “Change – Now!” might really mean. At stake is not only the future of France, but also that of the euro zone.

Hollande had pledged to renegotiate a fiscal treaty forged in March by his predecessor and German Chancellor Angela Merkel, that focused largey on austerity measures to reign in Europe's debt.

“The fate of the European strategy and EU's future may be decided in France, not in Greece or Spain,” said Laura Gonzalez, a professor of finance and business economics at Fordham University.

European stock markets fell sharply and the euro lost ground on currency markets last week ahead of balloting in both France and Greece this weekend.

Earlier the British newsmagazine The Economist ran a headline referring to “the rather dangerous Monsieur Hollande.” The United Kingdom’s David Cameron and Germany’s Angela Merkel both made clear their preferences for a second Sarkozy term, and there was even speculation, reported in The Washington Post, that US President Barack Obama secretly wished for a Sarkozy reelection as well.

“Mr. Hollande does indeed represent a threat to the euro zone,” according to Stanley JG Crouch, chief investment officer of Aegis Capital Corporation.

But others say that current budgetary restraints are likely to limit Hollande’s room for maneuver. Also, his heretofore modest political career — as party leader, member of the National Assembly and small-town mayor — evokes a man of caution rather than one of boldness.

With its high and rising public debt, France is pegged by some as the next domino that could fall in Europe after Greece, Italy and others. If Hollande is as prudent as he seems, his campaign rhetoric might be toned down into moderate policies. If so, he will be following in the footsteps of another leftist president whose election first rocked the markets but who eventually became the darling of investors thanks to fiscal orthodoxy, former Brazilian President Luiz Inácio Lula da Silva.

There is evidence, at the subconscious level at least, that the French expect little real change from their new president. During the post-election coverage of the first round results, a well-known television talking head, Ariane Massenet, referred to a candidate named “François Sarkozy,” mixing the names of the two leading candidates. Her gaffe copied exactly another Freudian slip a few months earlier on national television by Lionel Jospin, a former prime minister and unsuccessful Socialist Party candidate in 1995 and 2002.

Uncertainty over Hollande’s policy future stems not only from his low international profile but also from the character of the 2012 campaign. Even in the first round, candidates mostly sidestepped tricky issues or offered what amounted to technocratic tweaks.

“Of the many difficult choices France faces about its future, the most pressing is how to bring down its large fiscal deficit and public debt,” said Charles Oman, an economist at the OECD Development Centre in Paris. “There is no easy way forward, even assuming citizens and political leaders had the political courage to do what it takes, if only they knew what that is.”

In Oman’s view, there is no sense of urgency because so far “things are not that much worse for most people on a day-to-day basis.” This is reminiscent, he added, of “the proverbial frog — no pun intended — not jumping out of a pot of water when the heat is gradually turned up.”

Instead of a battle of ideas keeping with French intellectual tradition, the campaign often appeared more like a referendum on Sarkozy’s personal style, considered by many French citizens as arrogant, divisive and excessively flashy.

“Sarkozy is seen by admirers and adversaries alike as being very energetic but not very dignified,” noted Oman. “Large numbers of French voters were very uncomfortable with the fact that Sarkozy too often behaved in undignified ways.”

While clearly part of the country’s elite, Hollande followed the lead of successful politicians from Ronald Reagan to Lula and Merkel, positioning himself as more of a “regular guy” than his opponent, the son of an immigrant. Political opponents, even some inside his own party, have called him disparaging names like “marshmallow man” or “Mr. Royal,” the later a reference to his ex-partner, Ségolène Royal, a fellow politician who unsuccessfully carried the Socialist banner against Sarkozy in the 2007 elections.

Read more: What the French elections mean for Europe

The highest concern of those outside France, the future of the euro zone, also played second fiddle to the personality conflict and hot-button issues like illegal immigration. Nevertheless, along with other political rebellions in the EU, notably a row over proposed budget cuts that led to the resignation of Dutch Prime Minister Mark Rutte, the French president-elect’s campaign promise to change the fiscal treaty may be partly responsible for European Central Bank (ECB) President Mario Draghi’s call for pro-growth measures to accompany the fiscal belt-tightening.

Berlin embraced Draghi’s stance, but its policy prescription appears significantly different than that of Hollande, who has specifically called for the creation of eurobonds, increased lending capacity for the ECB, and a more accommodating monetary policy from the same institution.

“The German approach is to say, ‘Get the basics right and growth will follow,’” said Iain Begg London School of Economics’ European Institute. “The Hollande approach is pretty overtly Keynesian in saying that the public sector should not be clamping down as much as it is.”

So far Merkel has been able to convince German politicians and taxpayers to lend a hand to the rest of Europe in exchange for a hardline on future fiscal behavior. If Hollande pushes too hard, some fear that Merkel will be unable to continue to make that case successfully at home.

“If she’s then faced with a less cooperative French partner then she is going to face calls inside Germany to do something more radical, whatever that might be,” said Begg.

But even some who fear the worst from Hollande believe that he could also prove to be a force for European unity. “A semi-orderly re-calibration of the euro zone is the much preferred route for all concerned,” said Aegis Capital’s Crouch. “Mr. Hollande can actually be a unifying force of pragmatism and reason in restoring the semblance of balance needed to bring Europe out of the disastrous present construct of the currency union.”