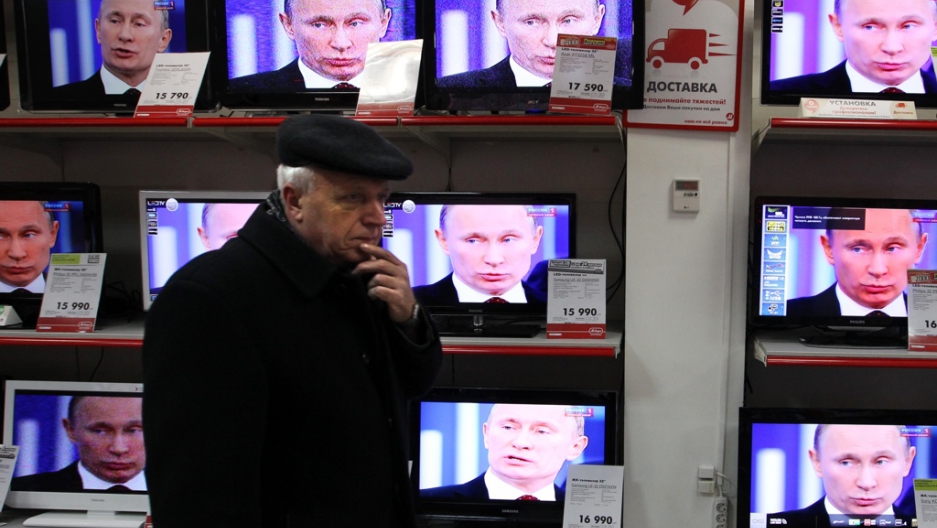 Tired of the same old stuff on TV, Russians have turned to Yandex as their portal to the web.
Share

MOSCOW — One of Europe’s biggest tech companies started as a little experiment in a backroom in the Russian capital.

Elena Kolmanovskaya and two fellow programmers — Arkady Volozh and Ilya Segalovich — were experimenting with search-engine software at a small technology firm in the 1990s when they developed the foundation for what they called Yandex.

Launched in 1996 when the Russian internet space was so tiny it could fit onto the hard drive of a modern desktop computer, Yandex quickly evolved from a wacky science experiment to become the most popular search engine in the Russian-speaking world, raising some $1.4 billion in an initial public offering on NASDAQ last May. Last year, the firm reported income of more than $7 billion.

“In the US they call us the ‘Russian Google’ but for most Russians, Google is the American Yandex,” said Kolmanovskaya, lounging on a beanbag in a colorful meeting room at the firm’s red brick and glass office complex near downtown Moscow’s Gorky Park.

A Soviet-educated mathematician, Kolmanovskaya spent most of her early career working as a programmer in the commodities sector before joining Moscow-based tech firm CompTech, headed by current Yandex CEO, Arkady Volozh.

Apart from being one of the firm’s co-founders, she also holds the slightly misleading title of “Editor-in-Chief,” a position she explains is a leftover from the firm’s adolescence.

“That was just the title I gave myself in the 90s when we didn’t have terms for things like brand manager in Russian,” she said. “I run the marketing department and generally try to ensure that the main ideas behind Yandex are maintained — a bit like the editor-in-chief of a newspaper.”

Pushing 50 and with graying hair, Kolmanovskaya is by far the oldest person among the hoards of programmers and technicians dashing around the funky open-plan offices, which bear little resemblance to the mostly stuffy, bureaucracy-laden commodities firms that make up the biggest chunk of the Russian economy.

Yandex’s success is largely based on the spectacular growth of the Russian internet, or Runet as it is dubbed here. Tired of the watered-down entertainment and news television programs churned out by state-controlled giants that run the bulk of media sources in the country, masses of Russians have logged online in recent years.

At around 25 percent a year, Russia has one of the fastest internet growth rates in the world, and the market is far from saturated, with penetration expected to reach some 65 percent of the population by 2013, up from less than half now.

But innovation and creativity have also played a strong role in Yandex’s success, particularly when it comes to competing with global internet search giant, Google, whose share of the Russian market is around half of Yandex’s 60 percent.

“Google has been a major threat to us for the past seven years," she said. "We are always very afraid but this helps us to be better – without competitors you get lazy.”

Faced with such a mammoth competitor, Yandex’s management has focused on the firm’s main strength – local knowledge. The firm mastered the art of Russian language search long before Google did and has since pushed forward by teaming up with service providers across Russia to provide the most up to date local information.

“Yandex has gained a reputation in Russia for being the search engine with the best local knowledge,” said Alexander Vengranovich, an IT analyst at the Moscow-based Otkritie investment bank. “This is mainly because it invests a lot of time and money in understanding the behavior of Russian internet users.”

One example is Yandex Probki, a nifty application that uses crowd-sourcing to map traffic jams, the bane of commuters in Russia’s hugely congested capital. The service has become so popular that its 1-10 point scale is a daily feature of radio and television broadcasts.

“Our CEO likes to call our approach ‘translocal,’” Kolmanovskaya said. “Technology is international but within each country, it has to adapt to local needs. Google hasn’t been able to do this in Russia.”

The company is now experimenting with transferring this approach outside its comfort zone of the Russian-speaking world by launching operations in Turkey.

But major multinational competitors aside, Yandex’s other major threat may soon come from closer to home. Since blogs and social networks were the main driving force behind the anti-government protests that rocked the country in the recent election period, many in Russia’s internet community fear a surge in government-enforced internet censorship.

The internet has long been a sensitive area for the Russian government, which is caught between a desire to reap the benefits from a flourishing innovation sector on the one hand and fears of an Arab Spring-style uprising on the other.

In its IPO prospectus released last May, Yandex management highlighted the risk of “politically motivated actions” such as a takeover bid from oligarchs close to the authorities.

But Kolmanovskaya, (pictured above in an image from Yandex), dismisses the threat as a marginal one, insisting that the risk statement was a pure formality followed by all Russian companies holding international offerings due to the nature of the country’s business climate.

“There have been rumors of small-scale censorship in Russia, but I don’t see any signs that the government is building a structure capable of really asserting control,” Kolmanovskaya said. “Of course, everything could change in politics, and then we would start to be afraid.”