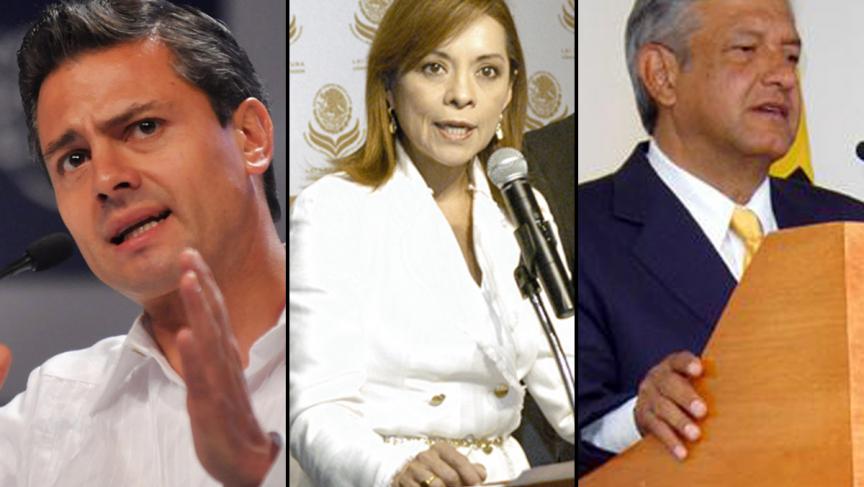 Mexico holds a presidential election July 1. It’s an important vote for the country.

Most Mexicans are desperate for a change, and fed up with a drug war that’s left tens of thousands dead.

According to the latest polls, the vote could usher the PRI back to power. That’s the old ruling party, which was booted out of office in 2000 after a seven-decade hold on the presidency.

The next big event in the campaign is a televised candidates debate on Sunday. Yet, despite the high stakes, many Mexicans will be watching something else.

The debate, scheduled for 8 p.m. on Sunday night, will be carried by several TV stations. But not by Mexico’s two biggest channels.

One, Televisa’s Channel 2, is sticking to its original programming — a dance competition for kids that’s wildly popular with viewers.

The other, owned by TV Azteca, is showing a playoff game between two of Mexico’s top soccer teams, Monarcas and Tigres.

Election officials want the game rescheduled. But they’re not declaring the debate a national priority, which could compel all TV stations to carry it. Instead, they’ve opted to ask politely.

The head of the Federal Election Institute told reporters it would be nice if the game took place at another time.

But that’s not going to happen.

“If you want to see the debate, watch Televisa (Channel 5). If you want soccer, watch TV Azteca. I’ll show you the ratings later,"  Ricardo Salinas Pliego, the head of TV Azteca, wrote on Twitter.

Mexican author and political commentator Guadalupe Loaeza said soccer is clearly going to win that face-off. She says many Mexicans just aren’t interested in what their politicians are saying anymore.

“We are so demoralized, we are so bruised emotionally, that of course we need distractions,” Loaeza said. “Of course we’re up to here with politics. I asked my own husband if he was planning to watch the debate. And he said, I think I’ll watch the soccer game. Naturally I shot him a dirty look, and he backed down. But unfortunately the TV executive is right. In the end, sports will always get more viewers than politics.”

That’s a shame, because the debate is an important moment in the presidential race. The front-runner, PRI’s Enrique Pena Nieto, is a young, handsome career politician who’s prone to gaffes when he speaks off the cuff.

The debate is a golden opportunity to see Pena Nieto under pressure, away from his pre-packaged campaign appearances.

Loaeza blames the media for encouraging Mexico’s politicians to market themselves as products, putting more value in a shiny package rather than actual policy ideas.

She’s not the only one blaming the media. One morning this week, on Mexico City’s W Radio, political analyst Mauricio Merino said Mexico’s 2012 presidential election campaign will be remembered for the way the media trivialized politics.