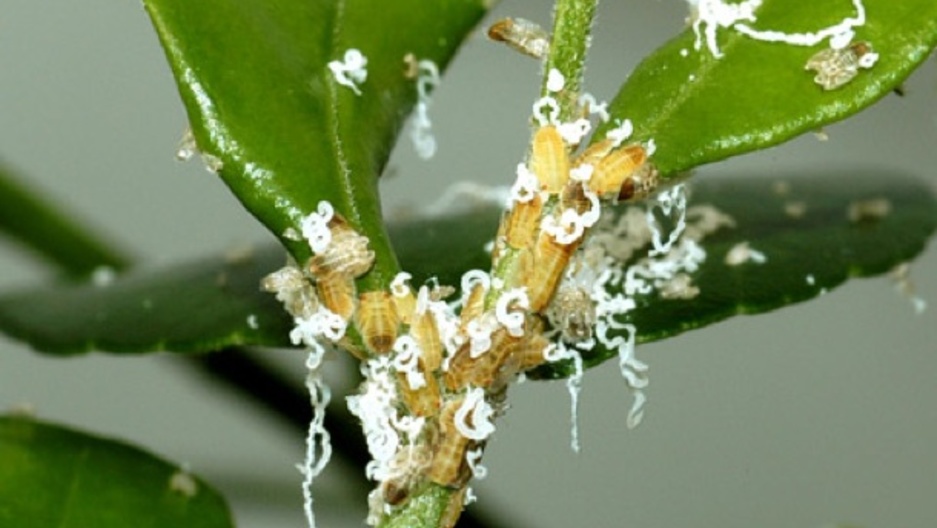 Nymphs of the citrus psyllid, which spreads HLB or yellow dragon disease (Photo courtesy of the American Phytopathological Society.)

An incurable disease that attacks citrus trees has devastated orchards in Florida. Since it was first detected in 1998, more than 70 million orange, lemon, lime and grapefruit trees have been infected

It's resulted in nearly $4 billion in damage and cost the state 6600 jobs.

The disease, carried by a tiny insect, has since spread to other southern states and now to southern California, where officials are scrambling to protect the state’s precious groves and backyard trees. In Hacienda Heights, near Los Angeles Hector Verduzco is sucking insects into a glass vial. That's not something you see every day.

Verduzco, who works for the California Department of Food and Agriculture, fixes his gaze on the newest growth on a bushy front yard lemon tree. He sucks a small tube, which pulls a small insect off the branch and into a jar.

Tina Galindo spearheads the attack on this insect, the Asian citrus psyllid, in southern California.

"Right there happens to be an adult," she said. "It's about the size of an aphid. They really like to feed on the new tender growth that is coming out."

These insects are all over Los Angeles now. Experts estimate there may be a million of them.

The insects are disconcerting, but the real problem is when they spread huanglongbing, known as HLB or yellow dragon disease, which slowly kills trees.

The disease was found a few weeks ago for the first time in California, near the house in Hacienda Heights. One of Galindo’s crews gathered an insect sample, sent it to the lab and it came back positive.

The tree it was found on was a lemon tree, but one that had been grafted with blossoms from other citrus. That practice, with the spread of HLB, can really make the situation worse.

"You don’t want to be sharing your grafts with other people in the area," she said.

The state is trying to get the word out to the more than 50 percent of Californians who have citrus on their property. The state's $2 billion citrus industry could be at risk.

Authorities say people in the quarantine zone where the disease was found should not share fruit nor give young trees to each other, either — a message sent in a USDA public service announcement as well.

In 2009, when the disease first arrived in Florida, citrus growers produced a warning video trying to warn other Americans to not make the same mistakes.

To keep the disease from spreading, infected trees are destroyed. Trees with the Asian citrus psyllid but no signs of the disease are treated with two pesticides. Unfortunately, there's nothing that can be done for organic farmers, said Ted Batkin, president of the Citrus Research Board in Visalia, Calif., and an organic grower.

"We have to really kind of step back and say – maybe lose our organic certification for a year or so, in order to get this disease and population in control so we can survive in an organic environment," he said.

The alternative, Batkin said, is places in Asia where citrus simply can't grow because of the disease.

Americans, Batkin said, aren’t yet feeling the full impact of the damage that’s already been done in Florida. But they will, as the supply of fruit and juice dries up.

"We are seeing approximately a 10 to 15 percent decline per year in tree health," he said. "If you at the statistics of how many oranges have been put into juice production in Florida, there is this continuous decline."

The citrus psyllid and the disease have hit Georgia, South Carolina, Texas and Louisiana as well. So far, Arizona, Mississippi and Alabama have only the bugs and no disease.

Dolores Escalante is the owner of the lemon tree in Hacienda Heights where the bugs have been found.

"This tree is from my native land. I’m from Yucatan, in Mexico," she explained. "Some friends from there brought the seeds for this variety, so we can cook with the right ingredients. All year round it gives us lemons."

She can't imagine what it will be like if the tree has to be destroyed. So much work has gone into growing it.