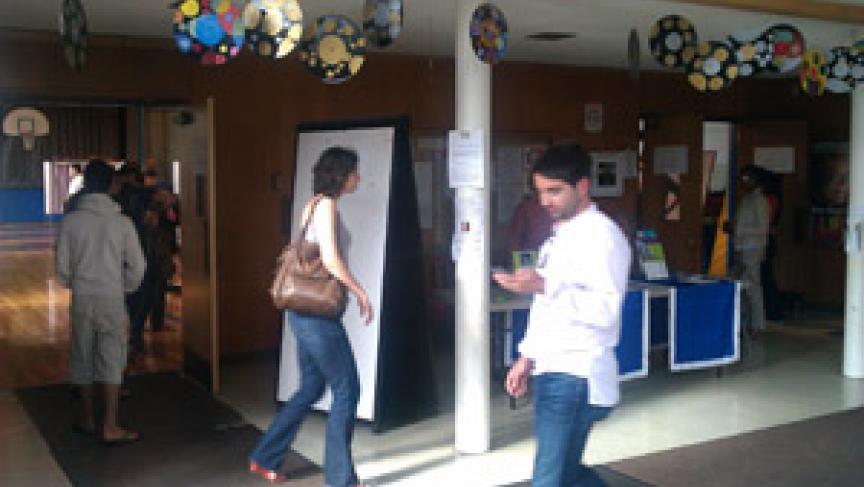 First round of the French presidential election for French citizens residing in Massachusetts. (Photo: Adeline Sire)

Share
French presidential debates are hard core. This last one I watched, between incumbent president Nicolas Sarkozy and challenger Francois Hollande this week, showed two men in control of their stats, but not their tempers. In France, Sarkozy is known as the "bling" president, because of his taste for shiny objects, and Hollande as "Flanby," the name of a commercial brand of flan, because of Hollande's apparent blandness. The debate itself wasn't bland, rather feisty in fact. Conform to presidential tradition, it went on for three full hours without any break, water break, bathroom break, or commercial break, and was only interrupted occasionally by two moderators who barely suggested the candidates go on to the next topic. The moderators were keeping time with clocks appearing by the candidate's sides, as the law requires that both candidates have the same on-air time. Both the incumbent president, conservative Nicolas Sarkozy, and the Socialist party challenger Francois Hollande disagreed over quoted figures. There were some accusations of "untruths" and the two occasionally spoke over each other for more than a minute at a clip. But they were still able to discuss economic growth in Germany, the United States, and the GNP of various countries in the world without breaking a sweat. My husband, Daniel, remarked that this intellectual exercise looked more like a dissertation defense than a debate, American-style. I'd have to agree when I see that political "debates" here look more like the endless repetition of talking-points. I'd add that the French presidential candidates seem to be in fact defending several dissertations at once, each focusing on the economy, immigration, unemployment, minimum wage, the 35-hour work week, etc. As a French citizen, I have always voted, whenever possible, when I was living in Paris, but also here in the US where I've lived for many years. I am one of the roughly one million registered ex-pat voters in the world. There are 150,000 of us in North America. But only about third us showed up at the polls for the first round election two weeks ago. I voted in Cambridge, Mass, where I live. Honestly, voting in the French elections doesn't require a huge effort on my part. The polling station is very close to my house, just a few blocks away. This is actually the shortest distance I've ever had to cast my vote in a French election. And this is an actual polling station, in a school, in Cambridge. French consul general Christophe Guilhou oversees the election process for French voters in New England. He said there is a particular reason to hold the voting in the US just before the election in France. "We're voting on Saturday, one day ahead of the normal election day in France," he said, "because of the time difference, we want the French community from America, not only in Boston, to vote before the announcement of the final results." And I did vote, though I won't reveal my choice. After the polls close, the votes are counted on site, and the results are sent via telegram to France, to be included in the general election. There weren't a lot of people at the polling station, but I met with some of them outside. One of them was Jeff Rego, an American man married to a French woman who recently acquired French citizenship. "It's my first time voting as a French citizen today," he said, "my first presidential election, it's great." Marc Battiani also voted there for the first time, but as a French citizen, who came to the US three years ago. He said he didn't bother him to have to show up for two voting rounds. "It's important to vote," he said, "because it's a right we have, and people are fighting for that, and even if we're not happy with the choices we have, we need to vote anyway." But some who couldn't find a candidate to their liking— even among the ten choices offered in the first round— have a different interpretation of civic duty. Thibault, who didn't give his last name, is a French student at Northeastern University. He said he voted for a goat. "Her name is Biquette" he said "and she is a great candidate. She is for nothing, against everyone. I think all the candidates present the same ideas." And how is Biquette going to fix the economy? "She's just going to eat grass in a field and I guess be happy," he said. Thibault plans to write in "Biquette, the goat" as well, in this week-end's final round of the presidential election. I'll just pick one of the two guys on the ballot.