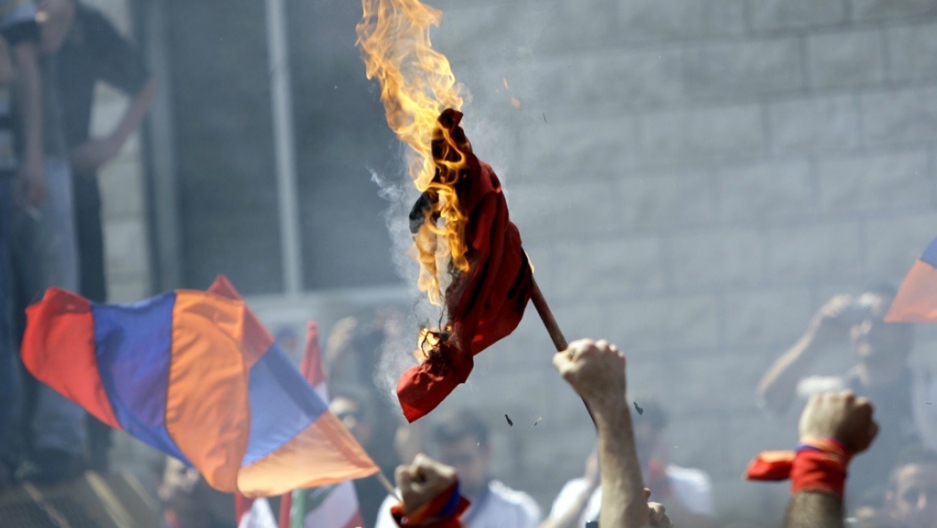 Lebanese Armenians burn the Turkish flag during a protest outside the Turkish embassy in Rabieh, northeast of Beirut, to commemorate the 97th anniversary of the Ottoman Turkish genocide against the Armenian people on April 24, 2012.
Credit: Joseph Eid
Share

BOSTON — Another April 24 has come and gone. It is the day Armenians around the world remember as beginning of the Armenian Genocide of 1915, when thousands of their ancestors perished.

I am a 52-year-old Turkish-American woman and I must admit that it wasn’t until I was in my late forties that I ever had a conversation with an Armenian person about the Armenian Genocide. Why? The answer lies in why I am compelled to write now about my own personal journey and two murders a quarter of a century apart.

On May 4, 1982, I learned that a man I knew had been shot to death on his way home from work. That kind and gentle man was Orhan Gündüz, who at the time was Turkey’s honorary consul to Boston. I had stopped by his little souvenir shop in Cambridge for a quick hello. As it happened, this was just a few hours before he died. What I remember most vividly is how his murder (a group named Justice Commandos against Armenian Genocide claimed responsibility) confused me so much that I spent the next 25 years avoiding the subject.

Like most other Turkish people of my generation, my knowledge of Armenians was limited to what I had studied in history classes: that the Armenians had sided with the Western allies during the waning days of the Ottoman Empire, and for that they were forever marked as traitors by Turkey and the Turks. Over the two decades following Gündüz’s assassination, I simply shunned the subject of the Armenian Genocide because it was too uncomfortable, too painful, and too difficult for me to deal with.

Then came the summer of 2006, when I received an invitation to work on an Armenian-Turkish dialogue project in greater Boston. I immersed myself in the subject. I learned the history of the Ottoman Armenians, which had been missing from the school textbooks I read as a child. I made new friends, including Armenian-Americans with whom I’d been living parallel lives, while never exchanging a word.

During this time I heard the news of an assassination. Hrant Dink, a Turkish-Armenian newspaper editor, was gunned down in Istanbul by a 16-year-old Turkish nationalist. I did not know much about Dink at the time. I knew only that he was the founder of Agos, the first community newspaper in Turkey printed in both Armenian and Turkish, that he had opened the eyes of his traditionally quiet and passive Armenian community, encouraging both Armenians and Turks to speak openly about their ethnic identities and their family histories, and that countless people in Turkey had discovered their lost Armenian ancestry through his help and support. The date was January 19, 2007, 25 years after I had buried the subject of the Armenian Genocide.

For the next five years, I attended workshops, participated in events, and watched countless videos and films on the Armenian Genocide and its aftermath. Most important, I spoke with many Armenians, from a variety of backgrounds and affiliations. As I became acquainted with the names of former Armenian villages and understood why every Armenian I met would mention the name of a village I knew only by its Turkish name, I was saddened — and enraged — by the lack of information, and by the silence I had experienced growing up in Turkey.

I’ve also have learned from my Turkish friends and colleagues. Because all Armenians call this period the Armenian Genocide, and would like to hear the same from Turks, there is a dialogue of the deaf at work between these two groups.

Many Turkish people — who are just starting to learn about their own history — feel that somebody is always trying to shut them up unless they start any sentence with the “G” word. Genocide is the word that encapsulates the events of 1915: large-scale deportations and massacres. To Armenians, this is known as the Armenian Genocide. Turkish people speak of the same events in the context of other factors that occurred during the waning days of the Ottoman Empire. They don’t deny there were large-scale deportations and even murders. They acknowledge the killing of women and children as a result of the deportations. But they have a hard time describing all of this as “genocide.”

Turkish people also feel that more attention should be given to the pressure that was exerted at the start of World War I in 1914 and into 1915 to protect their land and their culture as the Ottoman Empire was ending and the Republic of Turkey was being established.

As important as these points may be, I believe that all Turkish people need to know and accept one simple truth: somewhere, somehow, an ancestor of theirs may have taken the life of an innocent Armenian person just because that person was Armenian. When this information is understood, genuinely accepted, digested, and settled into the hearts and minds of every Turkish person, then, and only then, can we all start a new chapter. In that chapter, the discussion will no longer be an argument about the term genocide, the definition of intent, or the total tally of killings on either side; it will simply be a discussion about the question we want to leave for our children to consider: how do we deal with the “other” — that is, those seen as different or foreign.

Orhan Gündüz was killed because he was a Turkish diplomat, and he represented the misguided silence on the mass deportation of Ottoman Armenians from their original homes. Hrant Dink was killed because he was an Armenian from Turkey who spoke up and began a dialogue so that Armenians in Turkey as well as Turks could speak openly about what really happened in 1915; you could say he helped break the taboo of silence on the issue.

So where does all of this leave me, an American citizen of Turkish descent, in the tortured landscape of Armenian-Turkish relations?

I now use the word genocide when speaking about the massacres of 1915 because doing otherwise would be a retreat into ignorance on two fronts, both intellectual and personal. I know I simply cannot go on denying the true depth of brutality and suffering brought upon the Ottoman Armenians, and the animosity and hatred 1915 perpetuated for nearly a century. On a more personal level, such a denial would be an affront to all of my new friends and acquaintances … not only because they happen to be Armenian, but because they are human beings whom I care about.

Gonca Sönmez-Poole is an American citizen of Turkish descent who has been a member of the Boston media community for the past 28 years. She has worked in television, both within the United States and internationally, focusing on issues pertinent to minority communities. For the past six years, she has been involved in dialogue and confidence-building efforts within the Turkish and Armenian communities in the Boston area.