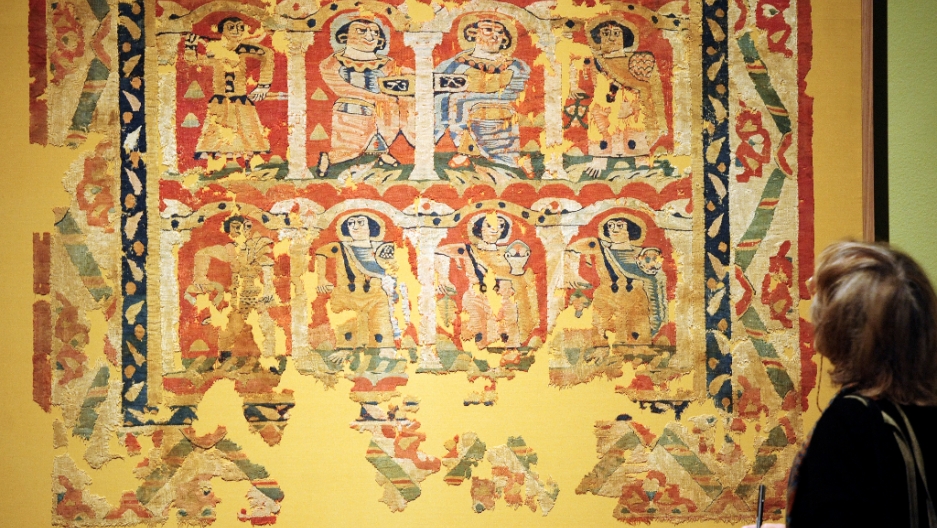 Visitors look at items as part of a press preview of the 'Byzantium and Islam: Age of Transition' exhibition at the Metropolitan Museum of Art in New York, March 12, 2012. The exhibition, which is scheduled to open March 14- July 18, 2012, presents this era in the history of the eastern Mediterranean, through some 300 works of art during which at the start of the seventh century, the eastern Mediterranean—from Syria through Egypt and across North Africa—was central to the spiritual and political heart of the Byzantine Empire, ruled from Constantinople (modern Istanbul).
Credit: Emmanuel Dunand
Share

Turns out the Metropolitan Museum of Art was ill-prepared for the likes of 13-year-old Benjamin Lerman Coady, who has corrected a map on display in the museum's Byzantine Gallery, reported The Hartford Courant.

The item in question, a map displaying the empire at its height in the 6th century and part of the museum's permanent Byzantine collection, neglected to show Spain and part of Africa, according to the Courant.

The young visitor thought that odd.

So he mentioned it on his way out, filled out a form, said the Courant, and probably forgot about it.

More from GlobalPost: Kentucky Derby: 5 things you need to know about 'The greatest 2 minutes in sports'

"The front desk didn't believe me," the young history buff told the Courant. "I'm only a kid."

But a few months later, he got an e-mail from no other than Helen Evans, the Met's curator for Byzantine art, said the Courant.

"You are, of course, correct about the boundaries of the Byzantine Empire under Justinian," she informed him, reported Yahoo.

The seventh-grader was invited back to the New York museum for a personal meeting with Evans, who says the museum will update the map, reported the Courant.

All thanks to one smart kid.