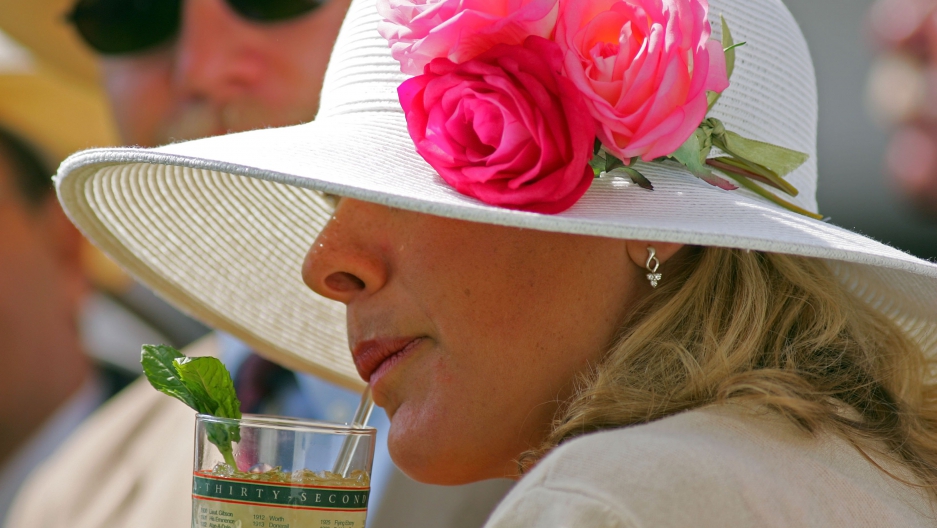 A woman drinks a mint julep during the 132nd Kentucky Derby on May 6, 2006 at Churchill Downs in Louisville, Kentucky.
Credit: Jamie Squire
Share

A day betting on the ponies at Churchill Downs would not be complete without imbibing in their signature drink, the mint julep.

The mint julep became Churchill Down's signature cocktail in 1938, according to CocktailTimes. At the time, a julep set attendees back 75 cents. Today, a mint julep in a collectors glass starts at $1,000.

There will only be 75 collectors cups made available by Woodford Reserve, as 2012 marks the 75th anniversary of the mint julep becoming the official drink of the Derby.

Sixty-five of those cups will be made out of pewter and hand-engraved with a horse scene from the race, along with the date and the Woodford Reserve logo. The cup also comes with a sterling silver drinking straw.

Ten "prestige" cups will also be available. According to Woodford, "These cups are sterling silver, plated in 24 karat gold and feature a diamond horseshoe with 43 diamonds totaling approximately one carat. A jeweler selects and sets each diamond by hand."

A prestige cup will set you back $2,000. All net proceeds from the sale of both the collector and prestige cups go to The Heart Of A Horse Foundation.

Chris Morris, a master distiller at Brown-Forman Corp., the whiskey suppliers for Churchill Downs, told ESPN, "We know from historic resources that juleps and bourbon and horse racing have been intertwined since the very beginnings of Kentucky."

This year, the officials at KentuckyDerby.com believe they will serve nearly 120,000 juleps, which according to their site requires, "10,000 bottles of Early Times Mint Julep Ready-to-Serve Cocktail, 1,000 pounds of freshly harvested mint and 60,000 pounds of ice."

The site also listed the following as their official recipe:

Make a simple syrup by boiling sugar and water together for five minutes. Cool and place in a covered container with six or eight sprigs of fresh mint, then refrigerate overnight. Make one julep at a time by filling a julep cup with crushed ice, adding one tablespoon mint syrup and two ounces of Early Times Kentucky Whisky. Stir rapidly with a spoon to frost the outside of the cup. Garnish with a sprig of fresh mint.