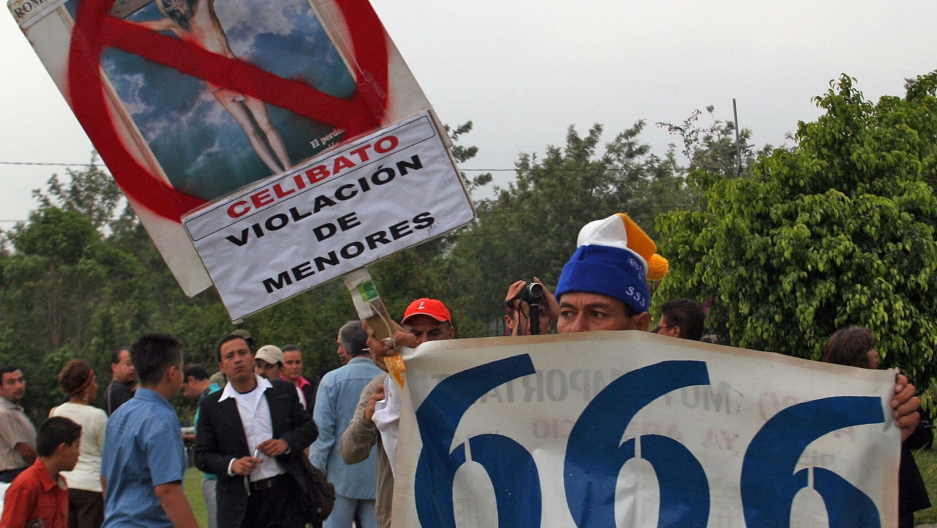 Followers of the sect 'Growing in Grace' leader, Jose Luis de Jesus Miranda -who recently called himself the Antichrist- shows signs with the '666' and against Jesus Christ in Guatemala City.
Credit: Orlando Sierra
Share

The end of the world is happening sooner than we thought.

According to Jose Luis De Jesus Miranda, it's all coming to an end June 30.

What gives him the authority to know our days are numbered?

According to a 2007 article by CNN, Miranda claims he not only speaks to Jesus, but that he is in fact Jesus.

"The spirit that is in me is the same spirit that was in Jesus of Nazareth," Miranda told CNN. He continued by saying he knew he was the reincarnation of Christ after being visited by angels in his sleep. "The prophets, they spoke about me," Miranda said, "It took me time to learn that, but I am what they were expecting, what they have been expecting for 2,000 years.

More from GlobalPost: 1 in 10 of your friends may be counting down to the end of the world

To help him spread the word about the end, Miranda created a video with an opening fit for his summer blockbuster. In the video Miranda claims an earthquake is coming.

Pulling from Revelation 16:21, he claims we are living in the moment of Armageddon saying, "I think, every day it is getting closer."

The Man Christ Jesus: Armageddon from mobile.cegenglish.com on Vimeo.

Miranda claims people should not be fearful of him, even if he does have the number 666, a number usually reserved for the Devil, tattooed on his arm.

Miranda's followers told the Miami New Times, "Thousands worldwide are marked with the number of His name, 666. The Earth's rotation has accelerated to a speed of 66,666 mph. All prophecies are fulfilling, even scientific, astronomical and numerological formulae are aligning - all pointing to the year 2012, where the Puerto Rican-born Jose Luis De Jesus (Latitude 66.6°) curiously turns 66."

More from GlobalPost: World not ending in 2012, scientists say

In a piece by the National Post, Alex Poessy, Miranda's bishop in Canada, claimed on the day to end all days, Miranda will become immortal, and so will his followers. How will God know who his followers are? Many of them have also inked the number 666 on their body.

To ensure they know the end is coming, Miranda has also purchased billboard space around the Toronto area.

One of Miranda's followers, Ana Guevara, told the National Post she doesn't mind being called a member of a cult saying, "All our lives have been enriched with this…. If we were a cult, then I guess we’re a pretty awesome cult. Because it’s teaching you how to live happy. How to live in a good mood.”