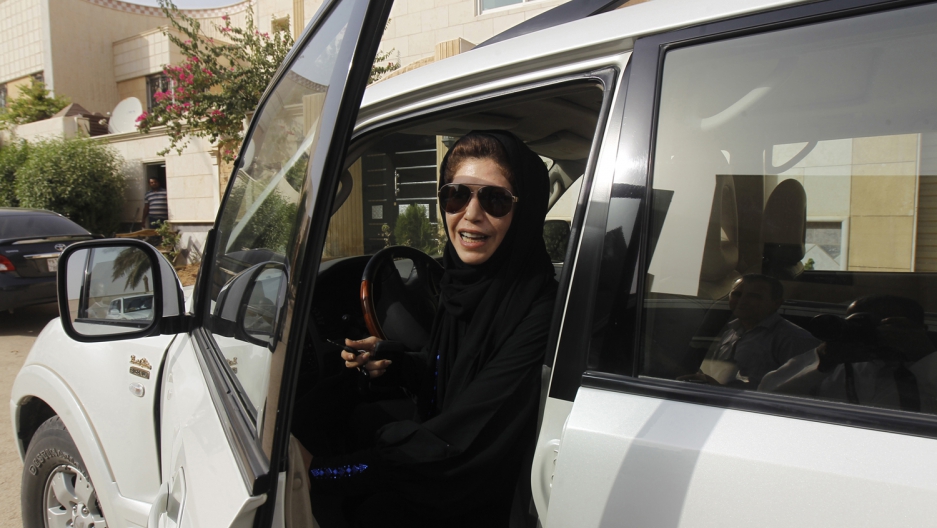 Female driver Azza Al Shmasani alights from her car last June after driving in defiance of the ban in Riyadh. Saudi Arabia has no formal ban on women driving, but only issues licenses to men. (Photo by Fahad Shadeed/Reuters.)

Dozens of women across Saudi Arabia took to the streets last summer and did something no Saudi woman had dared to do in over 20 years: They went for a drive.

One of the women behind the wheel, Shaima Jastaniah, was sentenced to ten lashes for her crimes. Saudi King Abdullah bin Abdul-Aziz Al Saud pardoned her the very next day, a decision announced via his wife's Twitter account.

But an odd thing happened: The Jeddah police department informed her that — pardon or no — they would be lashing her anyway.

On Monday, the police announced they had reversed themselves again. Jastaniah, it appears, has been granted a reprieve. But they warned she would be lashed if she were caught driving again.

Eman Al Nafjan, a proponent of the women’s driving movement and the author of Saudiwoman’s Weblog, said this dispute raises a tough issue for every Saudi woman.

"It's a central issue, though a lot of people are silent about it," she said. "Just the other day I was talking to a young Saudi man and I asked him about his colleagues at work. He was pro-women driving. But he told me that saying that in his social circles is similar to coming out as a homosexual in the west."

Nafjan, though, believes change is still possible, it's just going to take time. If for no other reason, economics will force the issue. Saudis, by and large, can no longer afford drivers, so someone will need to drive. Plus, younger Saudi women are highly educated and want to join the workforce.

"I think that, for the generation that's younger than me, they're just not going to accept sitting at home because they don't have the transportation or the means to get transportation," he said.

The reversal of policy, Nafjan said, can be attributed to an attempt by the government to appease hard-line conservatives who reject any attempt to loosen restrictions on women. The judge who sentenced her was an ultra-conservative himself, she added.

"He wanted to take a stand in some way, and that was the way he came out," she said. "For Shaima, it was really just bad luck."