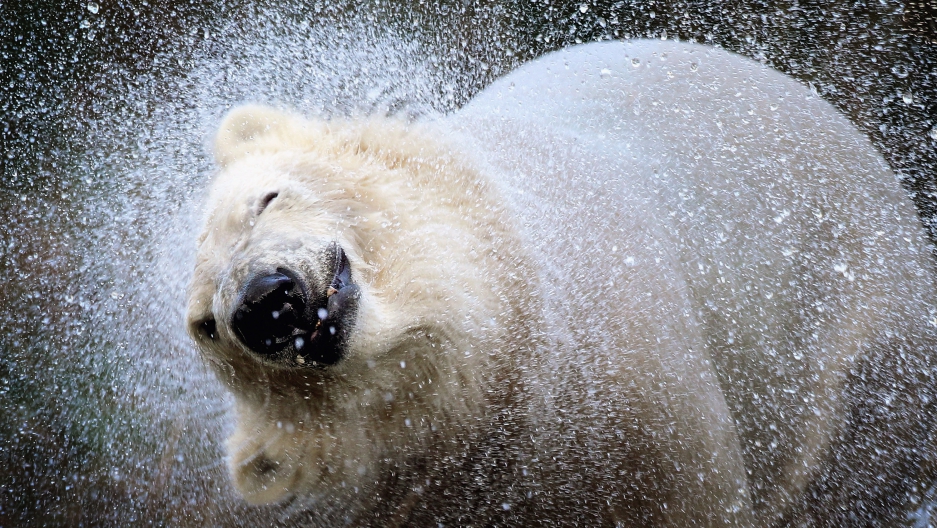 The study tracked 52 female polar bears off Alaska between 2004 and 2009, and found that about a third of those bears made swims of more than 30 miles during that period.

Researchers from the US Geological Survey used GPS tracking collars to watch the bears' movements, using only female bears as male bears' necks were too thick for collars.

According to Live Science, the study witnessed 50 swims averaging about 96 miles with one bear swiming nearly 220 miles.

The study reported that about 40 percent of the tracked bears took "marathon" swims.

It remains unclear why the bear are taking such long swims.

Researchers said that the research was not large enough to link the long swims with declining sea ice in the Arctic, which may be threatening the bears' habitat.

"We did not have the GPS technology on collars to document this type of swimming behavior in polar bears in prior decades," said Karen Oakley of the USGS Alaska Science Center, according to Time.

"However, summer sea ice conditions in the southern Beaufort Sea have changed considerably over the last 20 to 30 years, such that there is much more open water during summer and fall."

She went on to say, "Historically, there had not been enough open water for polar bears in this region to swim the long distances we observed in these recent summers of extreme sea ice retreat."

The New York Times reported that researchers found that even polar bear cubs accompanied their mothers on the long swims.

The study was published in the Canadian Journal of Zoology.