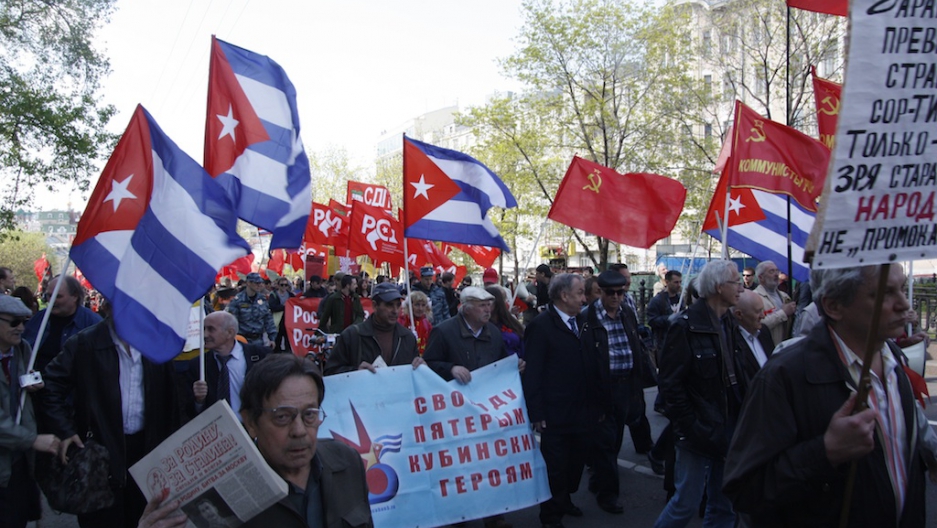 A group of leftists, including Cuba supporters, march at the "Left March" in Moscow.
Credit: Khristina Narizhnaya
Share

MOSCOW — Millions of Russians celebrated May Day today, with the bulk of the celebrations taking place in the capital.

President-elect Vladimir Putin and outgoing president Dmitry Medvedev took part in the May 1 procession for the first time. They led the biggest of the day’s marches, organized by the Federation of Independent Unions of Russia and attended by many from the ruling United Russia party, through Moscow’s central Tverskaya-Yamskaya Street, along the Red Square and toward Tverskaya Square.

About 120,000 people followed them, carrying posters with May Day slogans and flags such as “Peace, Labor, Friendship.” The crowd was heavily made up of out-of-towners employed by the state, such as postal workers, engineers, and workers of various factories.

Despite the large turnout, the lack of enthusiasm in the crowd was palpable. As music blared and statistics on renovated buildings, new playgrounds and planted trees boomed, marchers walked on indifferently, smoking cigarettes, talking on mobile phones and absent-mindedly waving flags, banners and balloons.

A man holding one side of a banner that read, “Development and Progress for Moscow,” admitted he did not know exactly what the banner said or what it represented.

“Ask him,” he said pointing to the man holding the other side of the banner. The second man declined to comment.

A family of three, after expressing support and solidarity with workers of the world, said they came to the rally from a Moscow suburb after applying on massovki.ru, a website that provides extras for movies. They will each be paid 300 rubles at the end of the rally, they said.

The mother, Yevgeniya, who did not want to disclose her last name, said that things have not changed much since the USSR.

“It was the same before, jobs offered days off and other perks [for showing up to rallies],” Yevgeniya said. “Nobody had much patriotism back then either.”

But Yevgeniya was happy she came to the rally.

“There are many people here. If you stay home, you won’t feel the holiday,” Yevgeniya said.

Two young men asked the GlobalPost contingent to march with a column of Putin supporters and chant pro-Putin slogans for 400 rubles ($13). After the offer was declined, they persisted with asking, saying that they only need to gather 10 more people and they don’t have much time.

Several other attendees said they attended the rally at the “invitation” of their jobs.

But some were genuinely rallying to support Russia’s workers.

Security guard Alexei Kozlov, who attended the rally with the Union of the Nongovernment Safety Sphere, said May Day is an important occasion for workforce team building, harking back to the Soviet Union.

“It makes the group stronger, closer,” Kozlov said. “Like during Communist times.”

Other rallies held in Moscow included a Communist party demonstration, which gathered about 3,500 in Moscow’s central Teatralnaya Square, a Just Russia rally in Sokolniki park, the Liberal Democratic Party on central Pushkinskaya Square and a nationalist rally on the outskirts of the city.

About 500 attended the “Left March,” a coalition of left movements, including the Left Front, various LGBT activists and the Other Russia party. Slogans included “Peace, labor, May, rifle” and “Russia without Putin.”

“May 1 is the workers’ day,” said Andrei Gorin, 32, who is a theater director and an Other Russia member. “We are workers, we are not rich. We need to support ourselves.”

Twenty-two people, claiming to be anarchists, were arrested after police found knives when searching them for refusing to remove masks, Russian media reports said. Seventeen LGBT activists were also arrested in St. Petersburg, where a law was recently implemented outlawing all “promotion and propaganda” of gay activity or lifestyle, for “homosexual propaganda” during the local May Day rally.

For more on workers' rights around the world, read GlobalPost's Special Report, "Worked Over: The Global Decline of Labor Rights."