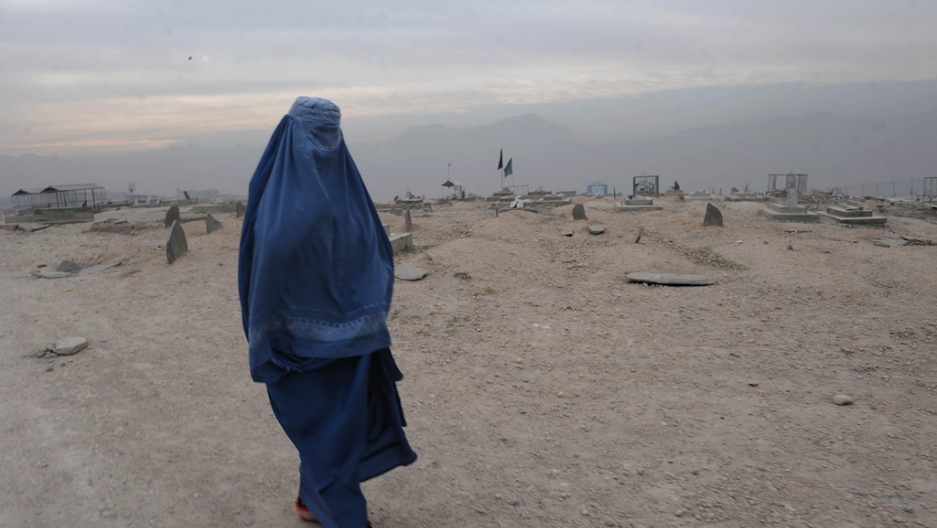 Many Afghan women face violence, and even death, from their families for crimes such as being in the presence of male non-family members, or chatting on the phone with men.
Credit: SHAH MARAI
Share

Honor killings have become a disturbingly common part of the narrative of news coming out of Afghanistan in the past decade. But sometimes, with a little spunk and a touch of luck, young women destined for murder by their families can live out a different outcome.

NPR reports the story of Lina (not her real name), a teenager who escaped an honor killing by her older brothers for allegedly speaking to a boy on her cell phone. Lina disguised herself as a boy and escaped the family home where she had endured physical and sexual abuse in the past, and ran to the gates of a nearby U.S. army base. (The location was not disclosed to protect Lina's identity). She was taken in by the soldiers, specifically Marine Maj. Jennifer Larsen, who became Lina's friend and confidante.

At the base, Lina enjoyed ice cream and Doritos, according to the NPR report, and learned a little English before arrangements were made to transfer her to a women's shelter in a larger city, away from the base and her family. But before she left, Lina endured visits from her family, who she accused of wanting to "trick" her to come back, and village elders, who pleaded with U.S. personnel to send her home.

"Afghan advisers told Americans at the base very bluntly: To keep peace with the community, Lina had to go home, even if it meant her death," said the NPR story.

Luckily, an agreement was struck by the U.S. and Afghan officials for Lina's departure, and she is now happily married and expecting her first child.

"I have everything I ever dreamed of," Lina said. "I live with a big family, and they all love me very much."

Lina is an example of a woman who took her life into her own hands and survived. But unfortunately, this isn't the case for so many young women in Afghanistan who face death at the hands of family members for crimes such as chatting on the phone, using Facebook, or being raped. Because record-keeping in Afghanistan is so uneven and disorganized, no official numbers exist for how many women are killed in honor killings annually - and because so many honor killings go unreported. Using Pakistan as an example, though, 675 women were killed in honor killings in 2011.

"Violence against women in Afghanistan is endemic," said Rachel Reid in her testimony to the Senate Foreign Relations Committee in 2010. "A nationwide survey by Global Rights of 4,700 women, published in 2008, found that 87.2 percent had experienced at least one form of physical, sexual, or psychological violence or forced marriage in their lifetimes."

Women in Afghanistan are also subject to ba'ad, the practice of giving women as settlements in tribal or familial disputes.

In GlobalPost's Special Report, "Life Sentence: Women and Justice in Afghanistan," a series on women and justice in Afghanistan, correspondent Jean MacKenzie wrote about the failed attempt at restructuring the justice system in the country, which is disproportionally hurtful to women and does little to fix institutional problems, such as looking the other way at ba'ad and honor killings.