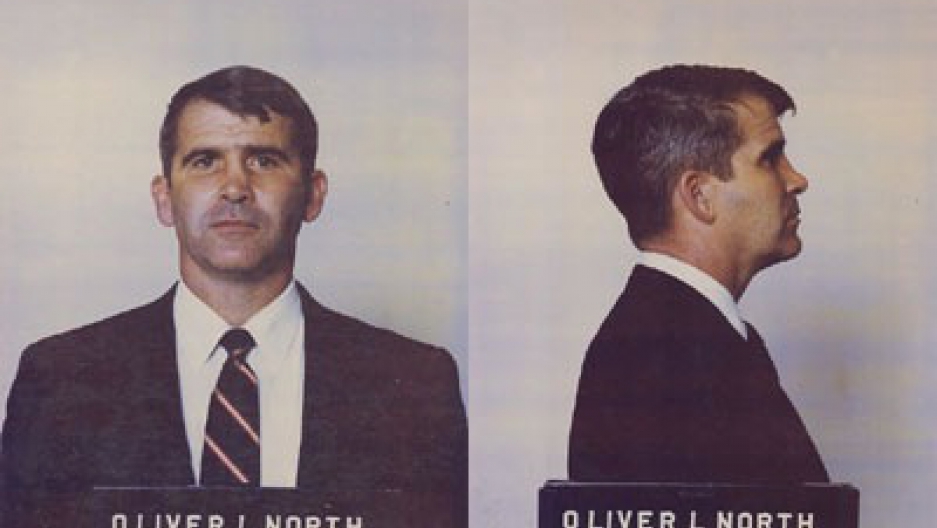 Oliver North's mugshot, taken on the day of his arrest following an indictment for 16 felonies relating to the Iran-Contra affair.
Share

Oliver North, beloved conservative war pundit and one of the architects behind the Iran-Contra affair is entering a new business venture. But instead of funding anti-communist militias (or death squads, depending on what you’re reading) by selling arms to Iran, he’s selling the latest iteration of the Call of Duty franchise.

In an ad campaign for Call of Duty: Black Ops II, North details the horrors of future war, real-life black ops and nightmare scenarios of hackers taking control of US drones.

“I don’t think the average American grasps how violent war is about to become … I have a nightmare scenario that a hacker breaks into our system that controls satellites, UAVs, even the launch of missiles,” North says. “Consider what it would be like to have friendly fire from US weapons overhead."

The video also flashes images of the Guy Fawkes mask clad Anonymous member, making a not-so-subtle assertion that hacker collectives will be behind Ollie’s “nightmare scenario.”

“If you can hack a bank, you can hack a drone,” says UAV pilot Major Hercules Christopher as the Guy Fawkes mask appears again in another video that is part of the ad campaign.

Call of Duty’s infamous foul-mouthed adolescent following is too young to remember the Iran-Contra affair, and probably far too apathetic to read about it. North admitted to playing a role in the sale of arms to Iran during the administration of Ronald Reagan in the hopes that the transaction would secure the release of US hostages being held in Tehran. North and a few other professional anti-communists of the day then chose to use the funds from the arms sale to support the Contras of Nicaragua, a rebel group attempting to overthrow the socialist Sandinista government.

The Contras (and the Sandinistas) were accused of heinous human rights violations, including the assassination of healthcare workers, torturing and executing children, and mass rape, just to name a few.

But to some Call of Duty fans, all of that probably sounds like "pwning noobs" — or obliterating your enemy. Perhaps the developers have found the perfect spokesman.