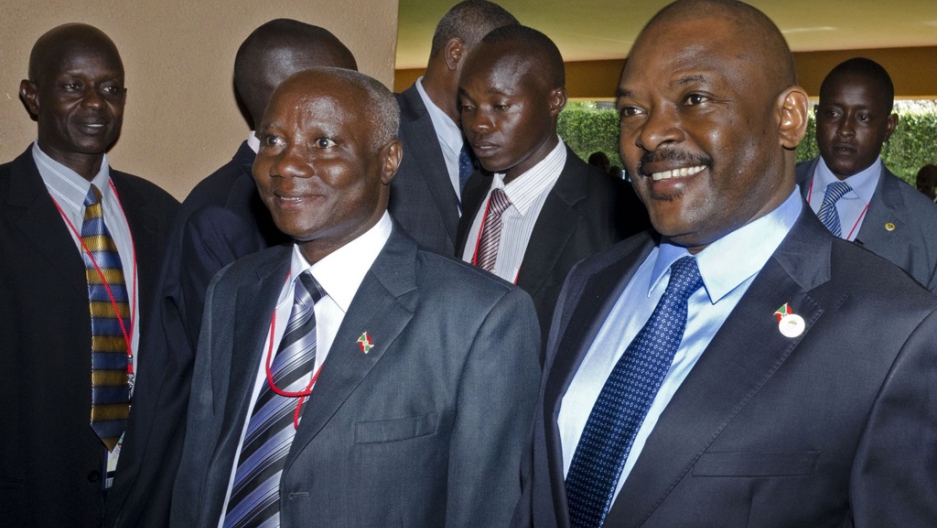 Burundi President Pierre Nkurunziza in Kampala, Uganda on December 16, 2011. Nkurunziza's government has been criticized in a report by Human Rights Watch for not stopping a series of political killings.
Credit: Michele Sibiloni
Share

Much of the news of Africa recently has focused on the coups in Mali and Guinnea-Bissau, the election in Senegal, the hunt for Joseph Kony and the fighting in eastern Congo.

Quite a lot has been written about developments in Rwanda, which last month marked the 18th anniversary of the start of its genocide.

Not much has been heard about Burundi. Until today.

The Burundi government banned Human Rights Watch from holding a press conference in the capital, Bujumbura, to release a report on political killings, reported the BBC.

Scores of politically-active Burundians have been killed in the past year, with little done to investigate the murders, according to “‘You Will Not Have Peace While You Are Living’: The Escalation of Political Violence in Burundi,” released by Human Rights Watch today.

"Not only has the state failed to take reasonable steps to ensure security and provide protection for its citizens, it has also not fulfilled its duty to take all reasonable measures to prevent and prosecute these types of crimes," the report states.

The post-election political violence has seen scores of people killed in the past year, reports Human Rights Watch, which did not specificy the number. More than 160 people have been killed in the political murders, charged a Burundian human rights organization, APRODH, in a report issued last week.

A major problem is that the killings appear to be carried out with impunity. The murders are not being aggressively investigated by Burundi authorities, according to Human Rights Watch.

"Not only has the state failed to take reasonable steps to ensure security and provide protection for its citizens, it has also not fulfilled its duty to take all reasonable measures to prevent and prosecute these types of crimes," the report charges.

The situation is of "great concern," said Ivan Simonovic, the United Nations assistant secretary-general for human rights, who was in Bujumbura Wednesday, at the end of a three-day visit. He said only eight of the 61 cases of extrajudicial killings documented by the UN last year had been investigated and resoved succesfully, according to AFP.

The report was researched in Burundi from early 2011 to early 2012 in which Human Rights Watch said it interviewed victims, relatives of victims, and witnesses. It gives a detailed account of the most deadly attack during this period in which at least 37 people were killed in a bar in the town of Gatumba in September 2011.

The report also highlights numerous cases in which individuals were threatened, forced into hiding, and murdered as a result of their perceived political leanings.

Burundi is a small Central African country of 8.3 million people with a GDP of $1.6 billion. It is surrounded by Rwanda, Tanzania and the Democratic Republic of Congo. Its political/ethnic tensions are related to Rwanda's, as the country has a minority Tutsi population and the majority is Hutu. Burundi was wracked by a civil war between 1993 and 2005 which pitted the minority Tutsi-dominated army against the majority Hutu rebels. It is estimated that 300,000 people died in that conflict, which ended in 2005 with a peace agreement which paved the way for elections that  saw rebel leader Nkurunziza become president. He was reelected to a second term in 2010.

“The ruling party had a chance to foster a new beginning for Burundi following the 2010 elections,” said Daniel Bekele, Africa director at Human Rights Watch. “Instead we have seen the systematic targeting of former rebel combatants and members of the political opposition. Many of those who refused to succumb to pressure to join the CNDD-FDD have paid with their lives.”

Human Rights Watch called on both the government and opposition groups to denounce killings by their members and supporters and take measures to prevent further violence.