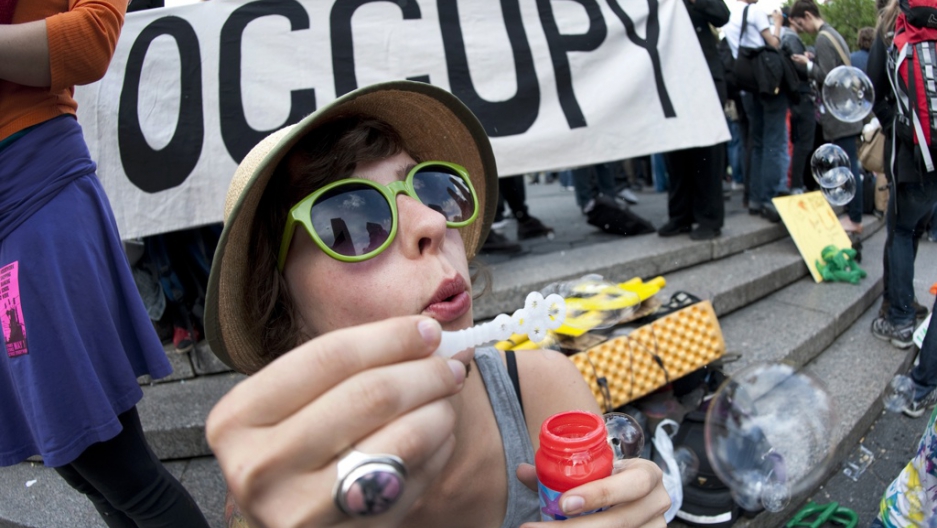 BOSTON, Mass. — Recently, I waited in vain in a chilly but sunny park for a peace vigil that had been advertised on the Occupy Boston website. The minutes ticked by. No one came. Unless the protesters were cleverly disguised as harried businessmen, mothers playing with their children, or dogs gamboling on the grass, the peace vigil was a bust.

I trudged home to mull the effects the Occupy movement has had on the political scene, and what role it could still play in the crucial months from now until the presidential elections in November.

The good news is that the Occupy movement has transformed the discourse on economics and equality. The brand is now out there, and all you have to do is say “I am part of the 99 percent,” for everyone to understand where you stand on the political spectrum.

The activists who staked out territory in Zuccotti Park and Boston's Dewey Square provided a focus for the frustration and anger felt by the vast majority of Americans who are struggling in the devastated economy. These people belong overwhelmingly to the Democratic Party already.

But they also became an object of ridicule and derision for the 1 percent, and the 1 percent wannabes, who form the backbone of the Republican Party.

The presidential candidates break down pretty cleanly along party lines in their assessment of the Occupy movement.

Former Massachusetts Governor Mitt Romney, who is now for all practical purposes the Republican nominee, calls the Occupy movement “class warfare” and deems it “dangerous.”

His erstwhile rivals were also almost unanimously against the movement.

Former House Speaker Newt Gingrich sees the Occupy movement as a sign of moral collapse on the left. His pithy advice to protesters: “Go get a job after you take a bath.”

“I understand the frustrations being expressed in those [Occupy Wall Street] protests,” he told ABC’s Nightline in October. “In some ways, they’re not that different from some of the protests that we saw coming from the Tea Party. Both on the left and the right, I think people feel separated from their government. They feel that their institutions aren’t looking out for them.”

More from GlobalPost: The state of the occupation around the world

But Obama’s compassion for the Occupy movement is not mutual. To the extent that it engages at all in the formal political process, Occupy is more a naysayer than a supporter.

Adbusters, a Canadian not-for-profit organization that is playing a prominent role in the movement, has advanced a motto that may be catchy, but not likely to appeal to a wide base:

“Jump, jump, jump over the dead body of the old left!” exhorts Adbusters, and goes on to warn of the dangers of too much interaction with the Democratic Party, or any formal political structure:

“First they silenced our uprising with a media blackout … then they smashed our encampments with midnight paramilitary raids … and now they’re threatening to neutralize our insurgency with an insidious campaign of donor money and co-optation. This counter-strategy worked to kill off the Tea Party’s outrage and turn it into a puppet of the Republican Party. Will the same happen with Occupy Wall Street? Will our insurgency turn into the Democrats’ Tea Party pet?”

The “insidious campaign of donor money” is a reference to efforts by some wealthy supporters of Occupy to finance their activities. Businessmen Ben Cohen and Jerry Greenfield — the duo behind Ben & Jerry’s ice cream — seem to have caused more consternation than joy with their campaign, which has so far raised more than $400,000 for the movement.

More from GlobalPost: The American Spring: A Preview

The plain truth is, the Occupy movement is not likely to sway too many people during what is sure to be a long and nasty election campaign. It has caught the popular imagination, but not in a real, galvanizing way. It has not attracted major figures from the mainstream, who could serve as the face of the movement or provide some much-needed organization and public relations outreach.

As with the peace vigil, it is better at rhetoric than at mobilizing significant numbers of actual people. Once the first heady days were over, with their easy camaraderie and swelling support, reality set in.

The Occupy movement is calling for a mass strike today to show the strength of the 99 percent. It is appealing to workers, students — just about everyone — to stop their activities and take to the streets.

If this event succeeds, there will be a mad scramble among political strategists to spin the action in a specific way.

Republicans will most likely play on fear, and play up the “socialist” leanings of the left to sway the undecideds to their cause. In this way Occupy could actually hurt the Democratic Party and its candidate.

The Democrats will point to the mass discontent with the unfair economic stratification of the country — which might be a tricky tap dance for them, given that a Democratic president has presided over the much of the economic meltdown and the Wall Street bailout.

In the end, it is highly unlikely that anyone who sympathizes with the sentiments expressed by the protesters would cast a vote for Romney, who epitomizes the “1 percent.”

If it can demonstrate that it has real clout, the Occupy movement could play a spoiler role, keeping people home on Election Day.