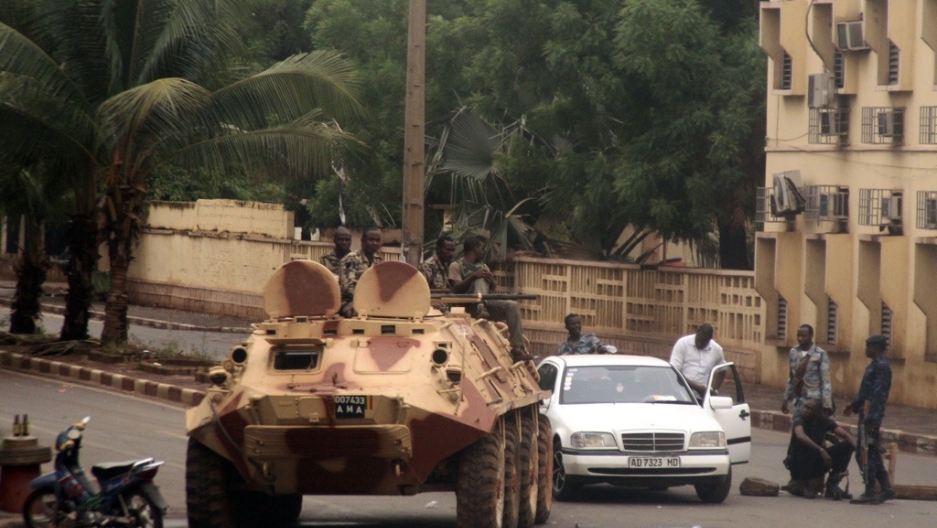 Mali soldiers loyal to Captain Amadou Sanogo sit on an armored vehicle in Bamako near Mali's radio station ORTM, on May 1, 2012. Sanogo said his troops were in control of the capital's airport, the state TV and radio station and the Kati army barracks following clashes with loyalists of ousted President Amadou Toumani Toure.
Credit: Habibou Kouyate
Share

Mali has been hit by a coup and now a counter-coup.

The capital, Bamako, saw fighting for the second day Tuesday as the military junta overran the barracks of the Presidential Guard, the red berets, who had remained loyal to deposed President Amadou Toumani Toure. The military junta appears to have put down the counter-rebellion and it is reported that 27 people have been killed, according to Reuters.

And, of course, there is the rebellion up north by the Tuaregs.

It's a quickly changing scene, so here's a guide to the players in Mali's continuing unrest.

It's widely accepted that the March 22 coup was an unplanned eruption of anger by low level soldiers. But it was Captain Amadou Sanogo who seized control of the mutiny and quickly found himself running the country.

Sanogo, in his late 30s, organized the mutinying soldiers at the Kati military camp to storm the presidential palace, about six miles away in Bamako, reported the BBC. Since then Sanogo has appeared forceful and confident at the helm of the junta, even though things have spiralled out of control.

Sanogo received military schooling in the US, including intelligence training, according to the BBC, as part of the US effort to give stability to Mali and boost the battle against Islamic extremists.

The military overthrew the Toure government because they said the army needed more support to fight the Tuareg rebels and the Islamic extremists in northern Mali. But the coup backfired. The Tuareg rebels took advantage of the confusion in Bamako and went on the offensive in the North. The Tuaregs took three major northern towns in quick succession including Timbuktu and Gao. They declared the independent state of Azawad.

Under international pressure, Sanogo agreed to turn over power to an interim government that would lead to new elections.

The 15-nation group, the Economic Community of West African States (Ecowas), does not like coups in its neighborhood. And it immediately voiced its disapproval of the Mali military junta.

Ecowas closed the borders, cutting landlocked Mali off from vital fuel deliveries and other imports. Ecowas is reported to be considering sending troops to Mali to restore constitutional rule. Nigeria is the economic and military powerhous in Ecowas, but President Goodluck Jonathan has plenty of his own problems with the ongoing violence from the Boko Haram extremists. Ivory Coast president Alassane Ouattara has mediated with the Mali junta.

Djibril Bassole, Burkina Faso's foreign minister is an Ecowas mediator and said planned talks in Ouagadougou, Burkina Faso, between the junta and Ecowas on Tuesday because of turmoil from the counter-coup attempt, reported Reuters.

The pressure from Ecowas, the UN, the US, France and other western powers convinced Sanogo and the junta to agree to the interim government.

The African Union has also pledged to send a peacekeeping force of 3,000 soldiers to Mali, to help stabilize the country. However Sanogo and the interim government have rejected the offer, saying they do not want foreign troops running the country. The size of the proposed AU force is half the size of the Mali army.

Traore, 70, is a well-known politician in Mali. He had hoped to be elected president in elections scheduled for April 29. Now he is president, but just for 40 days, until fresh elections are held, although many say that the polls will be further postponed.

Traore is from Kati, where the coup started. Like many of Mali's political elite, he went abroad for his education to the Soviet Union, Algeria and France, where he got a PhD in mathematics. He returned to Mali to teach at university, before getting involved in politics in 1990. He has held several cabinet positions including defence and foreign affairs. In 2007, Traore was elected speaker of the National Assembly.

Traore is the temporary president, but his ambition to lead the country is well known. Will he take the Mali to fresh elections and then step down?

Diarra, 59, is an astrophysicist who worked on five NASA missions and became a US citizen, but said he never forgot the Malian town of his birth, reported Agence France-Presse. Like Traore, Diarra studied abroad and earned degrees in France and the US. Before joining Malian politics, Diarra served as Microsoft's Africa chairman.

After being overthrown, Toure went into hiding at the Senegalese embassy in Bamako. He left the country on April 20 for exile in Dakar, Senegal, according to the New York Times. Toure, a former general, came to power in a 1991 coup. After that he established his democratic credentials by winning elections that were generally considered free.

Toure was about to step down from power, and was generally well-regarded internationally and he had many supporters domestically. People in Mali demonstrated in his favor, shortly after the coup. However Toure became unpopular with the army rank and file because of widespread corruption which siphoned off money to the military so that soldiers complained they were sent into the harsh desert of northern Mali poorly armed, fed and clothed.

The Tuareg rebels - the National Movement for the Liberation of Azawad

After seizing the fabled city of Timbuktu and other centers in northern Mali, the Tuaregs are now in control of a vast expanse of the Sahara Desert, estimated to be the size of France. Their organization, the National Movement for the Liberation of Azawad (NMLA) on April 6 declared the northern territory to be the independent state of Azawad.

This is not the first time that the Tuaregs have fought for an independent state. In 1963  there was a small Tuareg rebellion, according to IPS. The Malian army put down the revolt within a year.

More from GlobalPost: Tuareg versus Touareg. What's in a name?

A series of severe droughts hit the northern area from 1969 to 1974 and again from 1982 to 1984 and that forced thousands of Tuareg to flee to neighboring countries in search of work and food, reported IPS. The Tuaregs of the diaspora have been searching for a homeland for years. Several hundred Tuaregs went to Libya where they were some of Col Muammar Gaddafi's most prized fighters. When Gaddafi fell last year, the Tuaregs went south, back to Mali. This band of trained fighters, reportedly with lots of weapons, reinvigorated the Tuareg movement.

Although the Tuareg rebels have said they are a secular group, in recent months they have been working with Islamic forces who want to see the imposition of Shariah law in nothern Mali. When the rebels seized Timbuktu, men in turbans ordered women to cover themselves, according to local residents.

Related: Another time, another Timbuktu