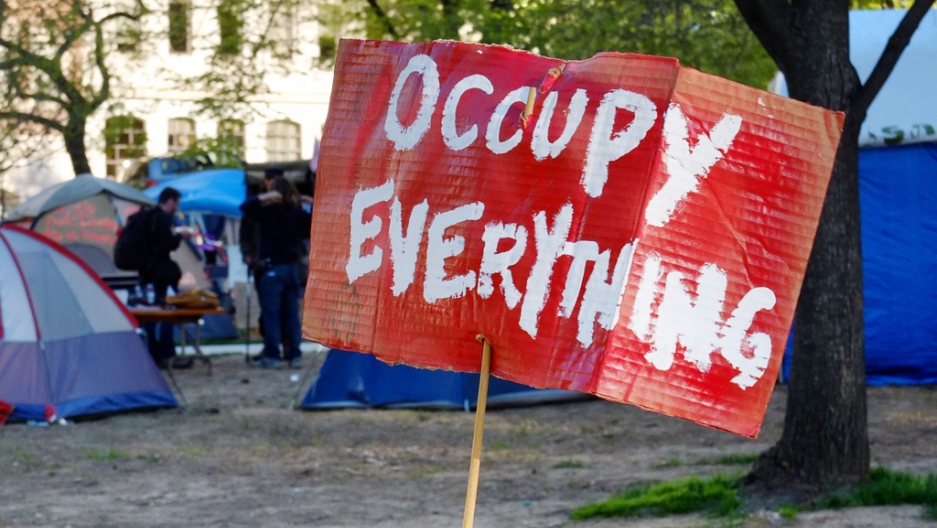 A sign reading 'Occupy everything' is seen at an Occupy DC protester's camp at McPherson Square park in Washington, DC, on April 5, 2012.
Credit: Mladon Atonov
Share

As the Occupy movement publicly emerges from a winter thaw and gears up for its first nationwide protest in months, activists are struggling to balance a desire to broaden the movement’s appeal with efforts to maintain some strategic control.

Today’s coordinated strike effort might provide a measure of what remains of the movement’s momentum, which drew tens of thousands into the streets last fall and pushed the issue of wealth inequality into the public discourse.

Those hoping the decentralized, loosely organized occupiers are coming back with a bullet-point list of specific goals will be disappointed. But in interviews, organizers said they spent the winter months reflecting on how to expand the movement, reaching out to more established activist groups for help.

“We did a lot of soul-searching over the winter and realized this isn’t going to happen overnight,” said Tanner Spendley, an organizer for Occupy Denver. “We don’t want to exclude people. Lets bring in the libertarians and the Tea Party.”

While tea partiers may not be joining en masse, Occupy Portland media liaison Joe Bennie said protesters are trying to create “an umbrella movement” that encompasses whatever local activist groups want to work on.

In some cases, opening the door for others appears to be working. A coalition of activist groups calling themselves “99% Power” are staging Occupy-style protests at corporate shareholder meetings across the country.

Last week — joined by a diverse crowd of purple-shirted union workers, clergy leaders, Occupy members and other activists — the organization drew hundreds to a Wells Fargo shareholder meeting in San Francisco. They blocked entrances, disrupted the meeting and decried what they said were unscrupulous foreclosure practices by the bank.

While linking arms with other protesters to block a side street entrance to the bank, Occupy Oakland activist Michael Thompson said he was unfazed by other groups tapping into Occupy’s messaging.

“Other organizations are hopping on board; Occupy is just a brand name,” Thompson said, struggling to stay upright as the human chain scuffled with a few unsympathetic locals who tried to push their way through.

“Apple will probably come out with an Occupy iPad,” he joked. “It just speaks to the power of Occupy.”

More from GlobalPost: The state of the occupation around the world

But some activists caution that in courting more mainstream groups and essentially lending out the Occupy brand, they risk losing control of the message and strategy. More moderate organizations might prefer political campaigning or pushing for legislation to taking over buildings or shutting down ports.

What if Occupy-affiliated groups want to endorse a candidate in an election year?

“Mainstream groups are going to try to really drive messaging,” Spendley said. “I think that's where Occupy’s strength is — to push those groups a little further. We’re the more radical ones.”

“It’s about finding that boundary between not being co-opted, keeping our integrity, but still working via established community groups,” he added.

Heading into the presidential election, there is some discussion over the place of labor unions and groups that traditionally work within the established political system. Although protesters are generally left-leaning, many protesters see electoral politics as hopelessly corrupt and are more interested in protesting outside President Barack Obama’s fundraisers than helping him get re-elected.

Brian Bean of Occupy Chicago said the movement must fight efforts by political parties to tap into the movement’s energy.

“I think we should resist it,” he said. “Our independence is one of the things that drew people to us and continues to — they see that Democratic and Republican are both parties of the 1 percent.”

There have already been cries of “co-option” over a coalition calling itself the “99% Spring,” which says it has in recent weeks trained some 100,000 activists in “nonviolent direction action.” The organization includes many of the same groups staging the shareholder protests under the banner of “99% Power.”

More from GlobalPost: Occupy the White House: How will Occupy influence the election?

But it’s the involvement of Democratic Party-aligned MoveOn.org, which hosted the training sign up on its website, that has raised the most ire among protesters. They worry the powerful group is trying to manipulate the movement for its own political purposes. Others have said the concern over MoveOn.org is overblown and in any case, Occupy should be resilient enough to withstand any political machinations.

“I have no doubt they probably tried to influence us, but my feeling is most occupiers are not going with it at all,” Bennie said. “If they feel like they’re being co-opted, they’re going to resist strongly.”

Beyond disagreement over the threat of such hijacking, differences of opinion remain on a number of other strategic issues as well. Is it productive to work within the system as well as railing against it? How should demonstrators deal with police? Is there a place for so-called “black bloc” tactics, including vandalism and property damage, which often lead to clashes with police? Is there value in re-establishing the camps that made Occupy famous and gave the movement an in-your-face, visible presence?

While divisions on those issues remain to varying degrees, protesters said they’re trying to alleviate those differences by embracing a “diversity of tactics.” The catch phrase popular within the movement essentially says that everyone should do what they feel is best, whether that’s pressing for legislation to halt foreclosures or taking over a public space and refusing to leave.

When it comes to a spring strategy, there are “different visions and different opinions,” acknowledged Sarah Lombardo, a 29-year-old rape counselor, as she sat in front of a police barricade at the Wells Fargo protest.

Although Lombardo isn’t eager to get arrested, she said sitting in front of that barricade seemed the best way to protest a system that took her family’s home in foreclosure while her mother battled breast cancer and left her with $50,000 in student loan debt.

“Making people of privilege feel really uncomfortable is the only way to create substantial change,” she said, as police stood over her. Nearby, a protester in a Guy Fawkes mask posed for pictures. “Asking nicely isn’t working.”