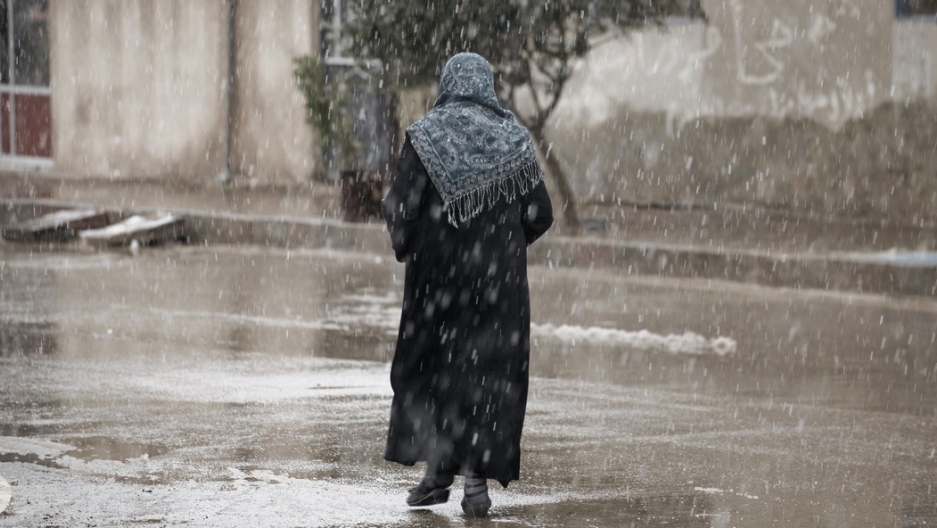 A Syrian woman walks to a bakery under the snow in March. Syrian forces have now built a wall to seal off the opposition stronghold neighborhood of Baba Amr in Homs.
Credit: Gianluigi Guercia
Share

BABA AMR, Syria — For Syrians on both sides of the concrete wall that now surrounds this neighborhood, the comparisons to the region’s longest running conflict are unavoidable.

“When my wife described the wall to me I immediately thought of the wall built by the Israelis to isolate Palestinian villages and towns in the West Bank,” said Abu Annas, formerly a resident of Homs’ devastated Baba Amr district.

“I can understand that Israel built a wall to protect Israeli settlers from Palestinians. But I cannot understand how a national government builds a wall to separate its citizens from each other.”

Since forcing the retreat of rebel fighters from Baba Amr after a brutal month-long bombardment in February, government forces have constructed a massive concrete wall to seal off the former opposition stronghold.

More from GlobalPost: Syria: Homs attack is a game-changer

A reporter for GlobalPost recently visited Baba Amr and the wall, describing it as up to 10-feet high and made of cement. It's still so new there is no graffiti. Since most residents have long fled, the neighborhood behind the wall has become “a dead land for cats and dogs,” as one former resident described it.

Soldiers and secret police guard the few narrow passages through the wall, arresting any male aged between 13 and 60, said Annas, whose wife and young daughter recently went to check on what remained of their home inside Baba Amr.

“They spent half an hour arguing with the security officer who said his men would have to check them before they passed through,” he said. “She came back crying, saying, ‘There is no Baba Amr.’”

Those houses not destroyed in February's siege have been taken over by soldiers, Annas said. Electricity and phone lines have been cut for months and now cars cannot enter, nor delivery trucks, meaning shops are almost all closed.

Activists in the area said the neighborhood — once home to some 28,000 people — has now been all but abandoned, with only about 1,000 still living inside the wall.

In other Sunni-majority opposition neighborhoods throughout Homs, such as Karm al-Zeitoune, where whole families were killed in recent sectarian massacres, and Deir Balbah and Qarabes, the majority of residents have also fled.

With the UN-Arab League ceasefire plan in tatters — at least 462 people have been killed since April 16 when the UN resolved to send ceasefire monitors, according to the opposition Local Coordination Committees — and veto-wielding Russia blaming the armed opposition for the majority of attacks, the Assad regime appears to be taking steps to re-exert long-term security control and collectively punish rebellious communities.

On Saturday, Abu Bakr Saleh, a spokesman for the Baba Amr media center who lived through the bombardment, said other security measures were preventing residents from traveling between Baba Amr and neighboring Joubar neighborhood, to the far southwest of the city.

Last week, GlobalPost witnessed continued shelling in Khaldiyeh and Bayada, Sunni-majority neighborhoods in north Homs that support the opposition and lie adjacent to Zahara, a neighborhood of mainly Allawites, an offshoot of Shiite Islam, to which the ruling Assad family and a majority of government elites belong.

Cairo Street, which leads from north Homs into Zahara in the east of the city, has been renamed “Death Street” by locals after the deadly snipers deployed to rooftops, presumably to protect the pro-regime neighborhood.

On their first visit to Homs on April 21, members of the advance team of UN observers, the first of 300 due to be deployed to monitor violations of the ceasefire agreement, were forced to take cover after shots rang out as they walked down Cairo Street from Bayada.

“The regime will not adhere to the Annan plan and the near future will prove that,” said Omar, a 24-year-old member of the rebel Free Syrian Army, told GlobalPost in an interview at his home in Homs’ Deir Balba.

“The regime is preparing for the post-Annan cease-fire by building walls around Sunni districts to block our movement and is digging a long trench around Homs two meters wide.”

Reports of Assad’s forces digging trenches around the south and west of Homs, where Baba Amr is located, first emerged last November. A video journalist working with GlobalPost witnessed the trench during a visit to Homs this February. The purpose of the trench remains unclear, but it appears to be a another military tactic to hinder access to rebellious neighborhoods.

In Daraa, the first city to rise up against the regime and suffer a sustained military assault, GlobalPost recently witnessed a labyrinth of checkpoints and deployment of tanks, troops and snipers, effectively sealing off the population from surrounding areas and the capital.

More from GlobalPost: Syria: On Lockdown

Rather, it appears post-revolutionary Libya, which strongly supports Syria’s opposition, has made the first serious effort to arm the rebels. On Saturday Lebanese authorities announced they had discovered guns and rocket propelled grenades aboard a ship attempting to dock in north Lebanon’s Tripoli, a Sunni-majority city also widely supportive of Syria’s opposition.

Omar, the young rebel fighter from Homs, said the FSA was now restructuring after suffering a strategic defeat in Baba Amr.

“We will adopt guerilla tactics,” he said. “We are fighting in small groups and moving from one district to another so we don’t let the regime block this district and kill us. The FSA leaders made a big mistake when they tried to hold Baba Amr.”

As the rebels seek new strategies for their armed struggle, the Assad regime has made its contempt of the international diplomatic effort clear. Assad himself revealed his scorn for last December’s Arab League monitoring mission in an email, first obtained and verified by the Guardian.

Writing to Hadeel Ali, his young media consultant, the president forwarded a YouTube video ridiculing the mission’s inability to spot hidden Syrian tanks, to which she responded, “Hahahahahahaha, OMG!!!”

That same contempt appeared to be on display more recently as Kofi Annan, the Arab League envoy, briefed the Security Council on a letter received from Syrian Foreign Minister Waleed Mualem on April 21. The letter stated that the government had now withdrawn all heavy armor and troops from population centers, the first step in Annan’s cease-fire plan.

But daily videos of smoke billowing above Homs and troops opening fire in urban protest centers have told a very different story.

Syrian officials see Annan’s plan as “a license for the regime to do more of the same,” the respected International Crisis Group, one of the only international think tanks able to still interview Syrian officials, wrote in its April 10 report.

“As the regime sees it, Annan’s mission, far from presenting a threat, can be a way to drag the process on and shift the focus from regime change to regime concessions,” ICG reported, “granting humanitarian access, agreeing to a ceasefire and beginning a vaguely defined political dialogue, all of which can be endlessly negotiated and renegotiated.”

As that process unfolds, the wall in Baba Amr stands as a physical symbol of the deep-seeded sectarian hatred that a year of relentless violence in Syria has engendered in former neighbors.

“The Sunni districts are hosting terrorists and armed gangs so the government should close them off by all means. If this needs a high wall, why not?” Haidar, a 35-year-old Allawite from Homs’ Zahara neighborhood, told GlobalPost.

A member of the Popular Committees, the official name for armed civilian militias fighting for the regime, Haidar said the possible collapse of the regime would mean no future for three million Allawites in Syria’s big cities. “We would return to our villages in the mountains,” he said.

“We have been occupying senior positions in the army, security agencies and government in Syria for four decades and we will keep the power in our hands, whatever this costs us.”

A GlobalPost journalist whose name has been withheld for security reasons, reported this story from Baba Amr, Syria. Hugh Macleod and Annasofie Flamand contributed reporting and wrote the story from Beirut, Lebanon.