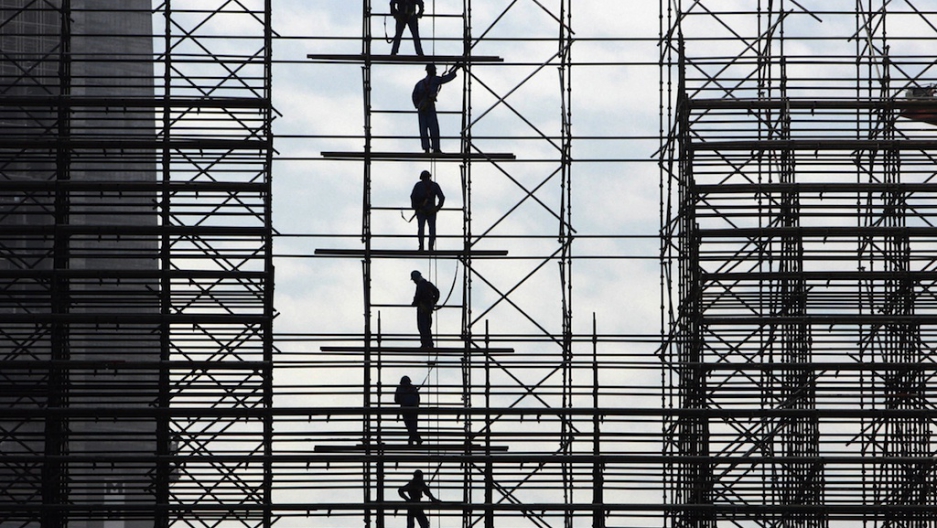 Construction in Dubai. As the Arab world expands politically; so too, does its banking and economic institutions. Here, Asian laborers work on a construction project in Dubai.
Credit: Karim Sahib
Share

BERLIN, Germany — If the recent global economic crisis taught a lesson about debt, it might be to think twice about investing in it.

Wary of buying bonds that may never be repaid, some investors in these precarious times are looking for opportunities that don’t involve such high risk.

Some are turning to Islamic banking, a rapidly growing industry that is rippling through global financial systems due to its conservative and low-risk approach.

Islamic finance adheres to Islamic law, or Shariah, which forbids Muslims from investing in businesses that contradict the Islamic principles of fairness and justness — that means, principally, that they are forbidden to charge interest on money loaned to others.

“It gained favor in recent years because the turmoil in the conventional financial markets highlighted the precariousness of banking that is based on interest, rather than underlying assets and service, as Islamic finance does,” said Atif R. Khan, managing director of the Ethica Institute of Islamic Finance in Dubai.

Islamic banking remains a niche market. But as more money managers focus on assets rather than debt-based investments, more may adopt the Islamic financial practices — whether they call it that or not.

Khan explained that Islamic finance focuses on equity, trading, and leasing. Shariah law provides specific guidelines on how such products are structured and executed, most recently by the scholars who promulgate rulings through the Accounting and Auditing Organization for Islamic Financial Institutions, the world’s leading standard-setting body for Islamic finance.

In terms of equity, a bank partners with a business by taking an equity share in all or part of the company, with profits and losses shared in proportion to ownership. For example, an Islamic bank will only invest in actual assets, such as machinery, automobiles or a business, so the transaction is always tied to a real asset or service. An asset can only have one buyer or seller at any given time, unlike interest that allows cash to circulate and grow into enormous sums with a high-risk of defaulting.

Yet according to Mahmoud El-Gamal, a professor of Economics and Statistics at Rice University in Houston, Texas, if all interest is forbidden in Islamic finance, then in principle, the solution is to build all financial intermediation on equity-based profit sharing. The practical solution is to use legal devices, often employing special-purpose vehicles, which are used by companies to isolate the firm from financial risk or hide debt and ownership, to restructure interest-bearing debt and collecting interest in the form of rent or price mark-up. “Designing such instruments and their certification as ‘interest free’ constitutes the bulk of Islamic finance,” said El-Gamal.

Ultimately, what has made the sector so attractive is its resilience. Since the 1990s, the rate of expansion of the Islamic system has been increasing by an average of 25 percent every year, yet more than 60 percent of its investors are actually non-Muslim, according to Aly Khorshid, an Islamic economic consultant and director of Islamic Finance Studies at Academy UK.

More from GlobalPost: Meet the people behind Turkey's miracle

Islamic financial institutions now exist in more than 75 countries worldwide. Although mostly concentrated in the Middle East and Southeast Asia, its practice is spreading to Central Asia and Europe. Even Eastern Europe, China, Australia and the United States are teaching Islamic finance in academic institutes.

“It’s become globally recognized in order to see how it benefits the global economy," said Khorshid. "It’s not something that is done overnight, there’s a lot of training on part of the institutions to know how to apply the system.”

Ehsan Razavizadeh, the head of Dubai office of the Cass Business School, located at the Dubai International Financial Center, attributes the rise of Islamic Finance in the UK to the country’s increasing Muslim population. “After 9/11, most of the Muslim capital floated to London and the UK in general,” said Razavizadeh. “I think it’s very natural for the UK to take some steps to get involved in Islamic finance."

"The other reason is because of the financial meltdowns that started a few years ago," he added. “That was a time when people started to think about Islamic finance as an asset-based financing system. Without having an asset you can’t lend money, so it’s quite different than commercial finance. From that perspective it was very attractive to many financial institutions in the UK.”

At the Bangor School of Business in Wales, the Islamic Banking and Finance MBA program blends academic theory with practical applications.

“The Islamic content is strongly grounded in related economic and financial ideas,” said Owain ap Gwilym, a professor of the program. “We are able to rationalize the Islamic law in the context of modern finance. In doing so, we also critique the ‘traditional’ interpretation by religious scholars.”

Indeed, investors and bankers might have to look beyond the stigma of the name and the religion attached to the financial system. “I don’t believe it should be called an Islamic system. If they asked me to rename it, I would call it a just system,” said Khorshid.

Though just, Islamic finance is still a niche system that could face considerable challenges. “Certainly the global recession has turned our attention not only to the shortcomings of interest-based finance, but also at the shortcomings of Islamic finance when it does not follow standardized guidelines and gets into trouble using instruments that are not entirely Shariah-compliant,” said Khan.