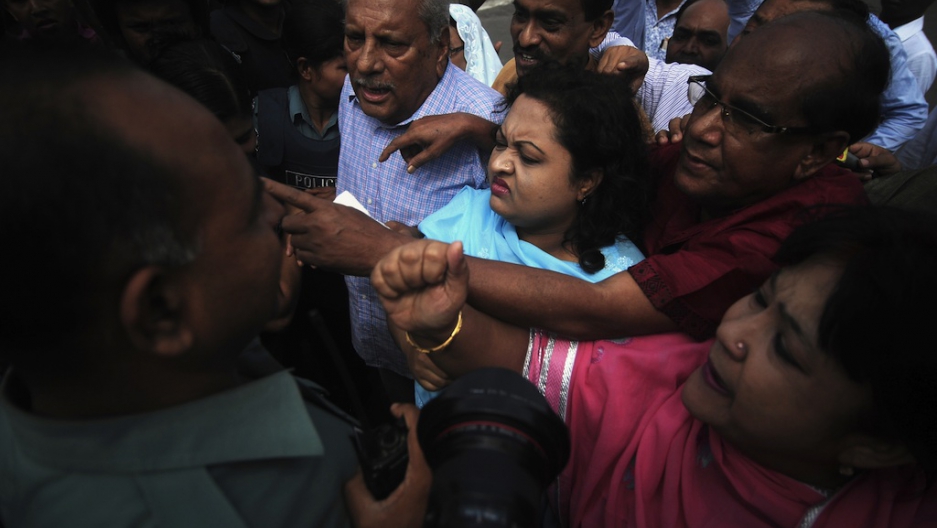 All that's been found of Elias Ali is his car, with the headlights still on, after he went missing earlier this month. Ali's disappearance is the latest in what rights groups say is an increase of forced political disappearances and kidnappings of labor leaders and activists.

A three-day strike followed news of Ali's disappearance, as activists supporting the Bangladesh Nationalist Party — which Ali was an organizing secretary for — called workers to the streets in protest. Two have been declared dead, and thousands are injured or under arrest.

General strikes continued over the past weekend, and Sunday's was the fourth strike called since Ali's disappearance. The AP reported two bombs exploding during the protests yesterday, and violence continued today.

“The rise in disappearances, particularly of opposition members and activists, requires a credible and independent investigation,” said Brad Adams, Asia director at Human Rights Watch. “The government has taken no serious steps to ensure such an investigation of these disappearances nor to prevent them in the first place.”

The government of Bangladesh has a history of these forced disappearances, and has been the target of international condemnation for not taking action on a specific government group known as the Rapid Action Battalion (RAB). According to Human Rights Watch, RAB is responsible for the deaths, kidnappings, and torture of citizens, especially those affiliated with workers groups and opposition parties.

RAB was formed in 2004 and is made up of members of varied law enforcement groups, including three branches of the military as well as police, and the group regularly carries out extrajudicial killings. According to a 2011 release by Human Rights Watch, 200 people had been killed since 2009, and that number has recently dropped, due to pressure from rights organizations to the government. However, it's feared that RAB has moved from outright murder to forced disappearances, such as in the cases of Ali and Aminul Islam, a union organizer with the Bangladesh Center for Workers Solidarity whose body was found April 8.

K. Anis Ahmed writes in the Wall Street Journal, "Ain O Shalish Kendra, a leading rights group, puts the number of abducted at 100, of which 76 remain missing and the rest are dead. Another rights group, Odhikar, claims that of the 30 people picked up in 2011, 11 were taken by RAB, and the rest by other agencies of law enforcement."

The government has refused to take responsibility for these actions, and Prime Minister Sheikh Hasina has even suggested Ali is in "hiding" as a way for his party to trump up charges and call for strikes and protests, according to Human Rights Watch.

"The government of Sheikh Hasina has made repeated promises to end abuses and ensure justice and accountability,” Adams said. “But in spite of these public pledges, the government consistently dismisses or ignores evidence of abuses by the security forces."

The irony lies in the history of RAB, however. The group was actually formed by Bangladeshi Nationalist Party (the now-opposition party) when they were last in office. In the early 2000's, the actions RAB is being accused of now, as an arm of the current government, were used against the then-opposition, Awami League.

"While the BNP is at fault for introducing extrajudicial killings, the Awami League is responsible for allowing such practices to continue and seemingly expand. Bangladeshi politicians are too often willing to accept any politically expedient measure—even if patently unethical or unlawful—when in power," writes Ahmed.