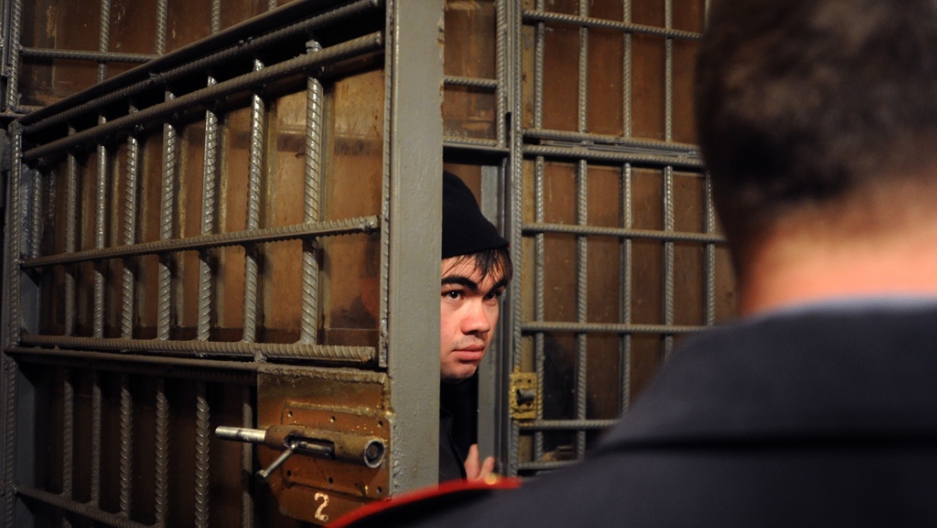 A police officer locks up a detained illegal migrant from Uzbekistan in Moscow earlier this year. Putin plans to toughen immigration legislation in a proposal analysts said would also restrict domestic travel, and openly flirted with xenophobia.
Share

MOSCOW — There was a Congolese man, stabbed on the Moscow metro. And a Muslim girl, beaten with a bat by three teenage boys, who told her to get out of their northern Russian city, Kondopog.

But perhaps the most disturbing recent example of racial violence was the murder of Muslim activist Metin Mekhtiyev, who was knifed in the neck and face outside his building in central Moscow earlier this month.

Police say it was a robbery, since his Vertu mobile phone, money and keys were missing. But the brutality of the crime points to a racially motivated attack, said Vera Alperovich, an expert in extremism at Moscow’s Sova Center for Information and Analysis.

Xenophobia toward non-whites is rising in Russia, especially toward migrant workers from Central Asia and the restive North Caucasus region, where unemployment is rampant.

Polls demonstrate how widespread the problem is. One in five Russians strongly agrees with the slogan “Russia for Russians,” while 43 percent believe that any measure taken to protect “my people” is good, according to research by Higher School of Economy professor Mark Ustinov. Nearly 70 percent of Russians have negative feelings toward people of another ethnicity, Ustinov’s research found.

The growing influx of migrant workers — 13 to 14 million annually by some expert estimates — most of them temporary, from poor former Soviet republics Tajikistan, Uzbekistan and Kyrgyzstan exacerbates the already tense racial and ethnic relations in Russia. Russia is second to the US in migrant arrivals.

Many Russians fear newcomers will take over their jobs, towns, and eventually their country.

This has led to a spate of attacks on foreigners, and contributed to the rise in popularity of racist political slogans.

“Stop feeding the Caucasus,” a slogan coined over the winter by anti-corruption activist blogger Alexei Navalny, gained much resonance with the public.

The number of violent attacks on non-white foreigners peaked in 2007, when up to 5 were killed each month. That number has dropped significantly. Thirty-two people were attacked and two killed in xenophobic and racist violence since the beginning of this year, according to Sova, which monitors racism and xenophobia in Russia.

The real number of attacks is likely much larger, however, since most go unreported, said Tanya Lokshina, the deputy director of the Human Rights Watch Moscow office.

“If locals beat an Uzbek worker in an industrial zone on the outskirts of Moscow, police are not likely to seriously investigate the case,” Lokshina said. “And the Uzbek is not likely to report the attack. He either won’t know how to do it, or, God forbid, won’t have proper documents.”

Most of Russia’s violent nationalist gangs have been liquidated, with leaders in jail for decades to come. Earlier this month, five members of a nationalist gang were sentenced to life in prison for killing 27 people and committing other crimes.

Last September, a nationalist businessman was sentenced to 9 years in jail for several charges, including designing and promoting an online game that required players to kill a migrant street cleaner and a police officer to get to a higher level. Players must then kill human-rights activist lawyer Stanislav Markelov, who was gunned down in Moscow in 2009, to win the the game.

The arrests have brought down the level of violent attacks. But an attitude of xenophobia still pervades Russian culture.

A blonde waitress with pale skin and blue eyes laughed when two well-dressed Africans walked into an upscale restaurant frequented by foreigners, GlobalPost observed while waiting to interview a source for this story.

She turned to another waitress, a dark-skinned brunette. “Your people have walked in,” she said. “I’m white. You are closer to them,” the blonde said, pointing out the brunette’s darker skin and hair.

Some are exploiting that for political advantage.

Migrants are not blending in to the Slavic society, said Dmitry Demushkin, the leader of the right-wing nationalist council “Russkiye,” or Russians. He plans to register a party called the Nationalist Party in the near future. “They are taking over certain industries — outdoor markets, street cleaning. Of course people don’t like it,” Demushkin said.

His party plans to advocate for the interests of ethnic Russians and those who have historically lived on the territory of the Russian Federation, Demushkin said.

The organization is against violence toward migrants, he said. Instead, Demushkin proposed to make working conditions in Russia unattractive for the migrant workers so they stop coming. His proposals include liquidating corruption and fighting what he sees as monopolies of ethnic groups in certain industries, he said.

Demushkin believes the party will become a powerful force in the near future, especially since nationalists are growing in strength across Europe.

Some migrants do violate the law. The frequency of crimes committed by foreigners has gone down, but the gravity has increased, Moscow prosecutor Sergei Kudeneyev said earlier this month, the Interfax news agency reported.

Last year more murders, attempted murders, serious robberies and rapes were committed by foreigners than in 2010.

More migrants in Russia work illegally than legally, experts said. CIS countries have a visa-free regime with Russia, but foreigners are required to register seven days after arrival. In order to register, an address or a job is required.

New arrivals, many of whom do not have contacts in Russia and cannot afford to live in a hotel, can’t get registered. Without registration, they cannot get permission to work.

“They are pigeonholed by these limits,” said Kamil Dilmuradov, a lawyer with the Union of Migrant Workers.

Many come from rural areas and don’t know the law. Some don’t speak or read Russian, Dilmuradov said.

President-elect Vladimir Putin has said migrants strengthen Russia’s economy and broaden its demographics, but he has proposed to toughen immigration regulation, including boosting penalties for violations and requiring Russian language and culture exams for all workers during his election campaign in January.

The politicians have the right idea to make the country more monolithic, Russia-Asia Union of Industrialists and Entrepreneurs political consultant Grigory Trofimchuk said.

The migrants aren’t doing anything bad, they just don’t know how to act, according to Trofimchuk.

“A crowd of young Uzbek men walking down the street and blaring their national music from their cell phones might cause tension,” Trofimchuk said.

The Federal Migration Service has drafted a conception of immigration policy, which includes education and integration initiatives for foreigners. The proposal is being reviewed at the top levels of government, according to Tatiana Bazhan, who heads the service's the department to facilitate integration. She said it is not yet clear when the proposal will be implemented.

But critics said the government is not doing anywhere near enough to solve the problem.

Business dictates migration politics, said migrant rights activist Lidiya Grafova, who is also a member of the government committee on migration policy. She pointed out the steady decline of quotas for migrant workers, which went from 3.9 million in 2009 to 1.7 this year.

“The fact is, while there are migrants, there will be those moods. If these problems won’t be solved, it could get worse and worse,” Dilmuradov said.